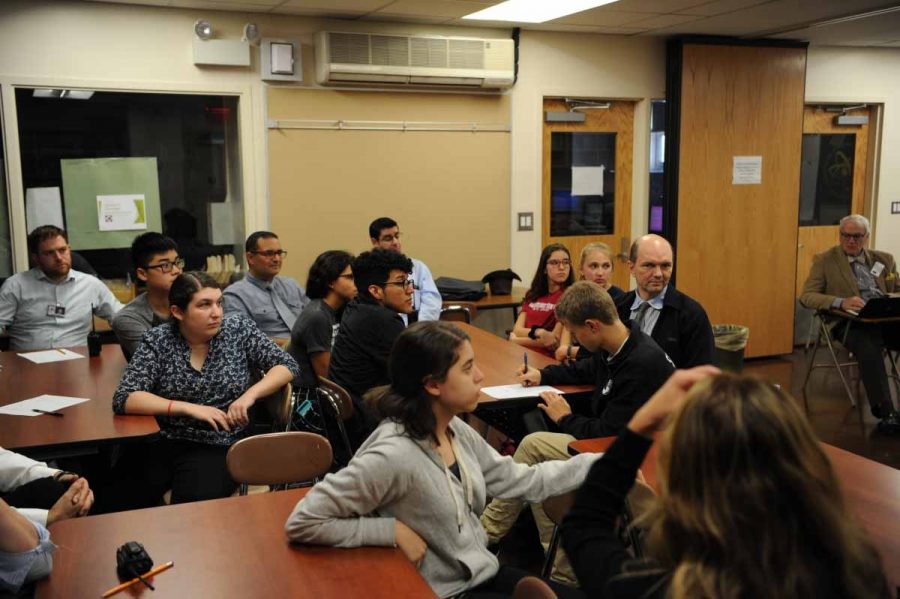 Community AWARE is a newly formed committee at Bronx Science in the beginning of the 2016-2017 school year, chaired by Mr. Robert Massimi of the Social Studies Department. The goals of the committee are to help students become aware of not only situations in the school but also those around the world dealing with the issues of race and diversity.

Students came up with the committee’s name, “Community AWARE.” AWARE is an acronym that stands for “Acceptance With Appreciation Renders Empathy.” The committee is comprised of students, teachers, counselors, a dean (Ms. Latisha Boone), administrators, and parents.

“Community AWARE aims to combat racism and bullying, and to help students have more empathy towards one another,” said Mr. Massimi.

Students, both in the Student Organization and from the general student body, were invited to be a part of the group. One of these students is the class president of the school, Adam Shaham ’17. He joined Community AWARE to spread awareness that what students say, especially in regards to the sensitive topic of race, can have a huge impact on others, despite the original intentions of their statements.

“There is a lack of awareness in the student body about how racism manifests itself in our school, and the goal of this program is hopefully to address that and to mitigate the issue to the best of our ability,” said Shaham.

“Some students have honestly become desensitized when it has come to racial comments and insults in general,” said fellow member Lakshmi Palchuri ’17.

However, Palchuri feels like Community AWARE is a step in the right direction to bringing change and wants to be an active member of the movement.

Mr. Massimi oversees all committee meetings and promotes active participation, listening to what the students have to say.

“Community AWARE is a student-driven initiative. We support and encourage our students to become leaders in combating racism and bullying,” said Mr. Massimi.

“We see what has been going on in our country, and we need to teach students how important it is to be sensitive, and to be able to understand and share the feelings of one another,” he added.
A few months into its inception, and after meetings with staff, parents, and school leaders the initiative has already begun to make changes in social studies classes through the use of history and current events, as well as promoting social and emotional learning into the curriculum.

The committee meets once a months, and it takes place after 10th period in Room 308. During the meetings, the members discuss issues of race, specifically as they apply to Bronx Science, and members then attempt to formulate steps to resolve these issues.

One of the main topics that students have brought up is affirmative action. In particular, the group discusses how some minority students feel that their acceptance into colleges are often discounted by other students, who feel like they only received acceptance based on their race.
Shaham voiced his opinion when he started thinking ahead about the effect of affirmative action on the future of Bronx Science.

“In the near future, we hope to increase the discourse on affirmative action, its role in admissions, and how talking about other people’s acceptances through that single lens can border on ignorance,” explained Shaham.

“We want to create a better environment between students, and to provide them with solutions and assistance if they are bullied or feel uncomfortable at school,” said member Andrew Ma ’17.

Ma feels particularly passionate about this topic, and he believes the existence of the safe space of the group and the opportunity that both administrators and parents have to become involved, has the potential to make Bronx Science better for all students.

Palchuri also feels that the inclusion of more adults in the group helps the cause tremendously. “The teachers and administrative staff are really making an effort to make this student driven, and they are giving us their authority as a foundation and allowing us to lead this initiative,” she said.

Fahad Nabi ’19 enjoys raising awareness through posters and bringing change into the curriculum, such as bringing more diverse authors into English classrooms.

“It allows us to both listen to the perspectives of others as well as to share our opinions and how we feel about certain issues,” he said.

Shaham also cites the various viewpoints of the groups represented in Community AWARE and how that leads to creating effective solutions. “I’ve really enjoyed how people on the board all bring such frank perspectives to an issue that many people are often afraid to discuss.”

Shaham and the rest of the board are eager to make Bronx Science a welcoming melting pot for students of all races, nationalities, and ethnicities.