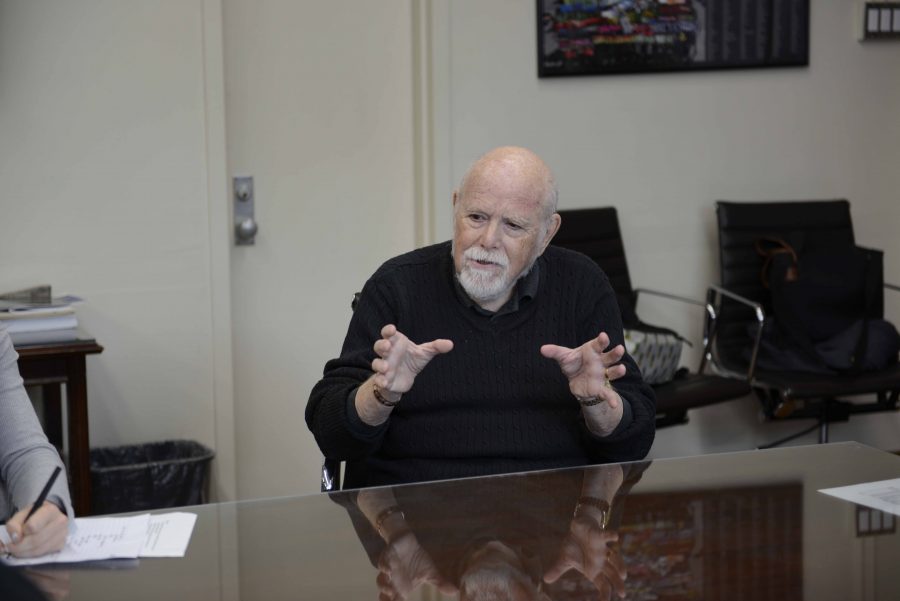 Brunner explains his vision to students and faculty.

Charles Brunner ’56 has established a Bronx Science student opportunity fund, together with the Bronx Science Alumni Foundation. Known as the Brunner Award, students will now have the opportunity to receive grants that will sponsor their endeavors. With the support of his wife, Claire, and daughter, Jeryl, Brunner has graciously allocated $15,000 this year to kickstart the fund, which is set to increase during the following years.

The Brunner Award is open to all Bronx Science students. The application was released to the student body on Friday, October 14th, 2016. While it is required that an application be turned in, there is no restrictive deadline date. Applications will first be evaluated by a student committee, and final decisions will be made by school leadership and the Bronx Science Alumni Foundation.

There are no limits on what students can utilize the grants for. An individual who needs financial support to travel to a foreign country to conduct research is eligible to apply for the fund. Members of a club or the Speech & Debate team can apply if they want to, to travel to an event or competition. Student athletes can even take advantage of the opportunity, if they wish, to travel to a sports camp or a major competition.

Brunner, a former student at Bronx Science, when the school was located at 184th Street and Morris Avenue, believes that he found his niche during high school. Surrounded by like-minded peers and teachers who made Shakespeare seem “like the guy next door,” Brunner was moved by the exuberant Bronx Science community. Happiness, he believes, is what brought him back to his alma mater sixty years later.

Brunner also credits the creation of the fund to his extensive engineering background. His success in the engineering field allowed him to establish the Brunner Awards. Despite being deeply invested in his humanities courses as a high schooler, he graduated from The City College of New York as an engineer. He then entered the workforce as a mechanical engineer. After several short lived jobs, he settled into the field of incineration engineering, the process of handling hazardous waste treatment, eventually earning the nickname “Incinerator Guy” from his coworkers and friends.

Brunner is an expert in his field; he has written fourteen books on incineration. His wife even proclaims one to be the ‘Incineration Bible.’ He is an avid traveler, having visited and lectured in almost fifty countries. Just last year, Brunner spoke about incineration methods in Thailand.

Applicants chosen for the Brunner Awards will also receive Brunner’s autobiography, Under The Sycamore Tree, which he co-authored with his wife.

Co-chairs of the Brunner Award, Timnah Rosenshine ’17 and Konstantinos Voiklis ’17, will work closely with members of the Bronx Science Alumni Foundation to determine grant awardees.

“Kosta and I will be reviewing every student application and presenting them to the administration,” Rosenshine explained. “We plan on working alongside a student council comprised of three underclassman to look over all of the applications.”

Rosenshine was selected as co-chair due to her range of interests; photography, philosophy, autism-related research, and hiking make her a diversified leader.

Brunner is thrilled to give students the opportunity to make what once may have seemed out of reach, attainable.

“Growing up at 181st Street and Morris Avenue,” Brunner recalled, “I should have been going to every Yankee’s game with the kids in my neighborhood.” Instead, because of his experiences at The Bronx High School of Science, he found that reading books and completing mathematical equations were his true passions. Now, Mr. Brunner will work to erase financial obstacles that Bronx Science students may encounter while pursuing their passions.