Michelle Liu ’17  Selected as a Semifinalist in the 2016 Siemens Competition in Math, Science & Technology 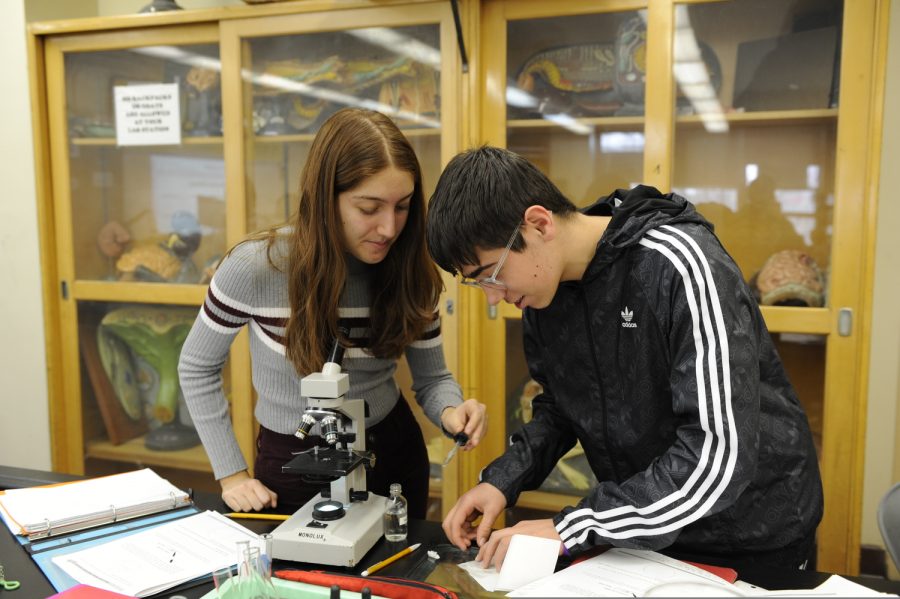 Working hard in a lab, like these Bronx Science are doing in Biology, was the key to Michelle Liu's success in the Siemens Competition.

After three summers of working in the laboratory of Dr. Neil Bander and Dr. Ming Guo at Weill Cornell Medical Center, Michelle Liu ’17 was announced as a Semifinalist of 2016 Siemens Competition for her joint research project with her sister, Judy Liu, who attends Stuyvesant High School.

Their project, ‘Identification of a Factor that Induces Prostate Specific Membrane Antigen (PSMA) Expression in Human Endothelial Cells,’ focused on a particular kidney cancer cell line that induced significant level of PMSA, an antigen found in tumor angiogenesis. They generated an antibody that can block PMSA expression in human endothelial cells.

In the fall of her sophomore year, Liu had contacted her mentor, Dr. Guo, in Dr. Julie Mankiewicz’s Biology Research class.

“I really wanted to do cancer-related research so when my mentor proposed this project on prostate cancer, I was immediately intrigued,” Liu said.

By her senior year, in order to complete the project, Liu worked thirty-five hours weekly during the summer and every day in September before the Siemens deadline. But in collaborating with her sister, collecting data and writing their research report, Liu was able to make the best of her time.

“My sister and I did a tissue culture almost every time I went to the lab. We plated cells, stained the cells for the immunofluorescence test, and visited the animal room,” said Liu. “Working in a team with someone I was already comfortable with made the lab work enjoyable and efficient. More ideas can be developed and we can catch each other’s mistakes in the data or in execution of the procedures.”

Liu said she owes the entire experience to her mentor, Dr. Guo, and her junior and senior research teacher, Dr. Robert Muratore.

“My mentor and her colleagues were so friendly, and they always helped each other. This environment made it much easier for me to adjust to the lab, and I felt really comfortable asking her questions and learning from her,” Liu remarked.

Liu found out about the Siemens result from Dr. Erin O’Leary, her Epidemiology teacher, before the fire drill on October 18th, 2016.