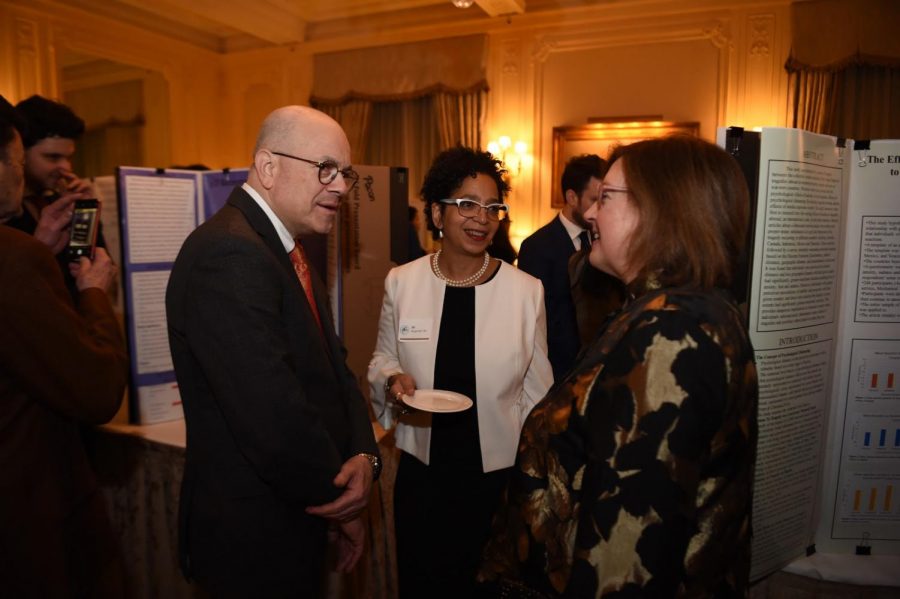 Dr. Donahue and her husband discuss the research projects with Dr. Jill Bargonetti on the night of the research competition.

Students at The Bronx High School of Science, a school renowned for its accomplished alumni and quality education, are no stranger to high expectations.  Luckily, the research program at Bronx Science has yet to disappoint. The three-year program, beginning in a student’s sophomore year, allows students to choose between four research tracks: social science, physical science, math, and biology.  Students then begin the arduous process of selecting a mentor, working on a research question, writing their paper, and finally, submitting it to prestigious competitions, especially the Regeneron Science Talent Search. As a tribute to the students’ accomplishments, Jonathan Freedman ’74 and his wife, Aimee Freedman (parents to William Freedman ’21), hosted a gala on Thursday, February 6th, 2020, at The University Club in Manhattan. Parents, alumni, and students alike gathered to learn more about our students’ research conducted over the past couple of years. After the poster presentations, Dr. Jill Bargonetti, a mentor, researcher, and notable Bronx Science alumna from the class of 1980, gave the Keynote Address to all who attended. To watch the Keynote Address in its entirety, followed by an interview with Dr. Bargonetti conducted by a Bronx Science student and fellow researcher, Emily Chan ’20, click on the video above.

The night began in the familiar Bronx Science lobby, with an unnatural sight: crowds of students dressed in formal attire, clutching tri-fold cardboard posters. Everyone scurried into their assigned bus, and before they knew it, they arrived at the gala in midtown. High school students filed into the doors of The University Club, kicking off a night of celebration. “It was the highlight of my time in research; it was a super valuable experience presenting my poster and seeing the amazing work of my peers,” said Amanda Caress ’20.  Projects on topics ranging from Alzheimer’s to political activism could be found all around the room. Mentors and alumni walked around observing and discussing the students’ work. In explaining their projects, students also had the opportunity to socialize and to network with many distinguished scientists and alumni. “One of the women I got a chance to talk to was actually one of my mentor’s students from years ago,” said Ruby Hogue ’20.

After a night of delicious food and enthralling discussion, attendees gathered in the next room to hear Dr. Jill Bargonetti ’80, the keynote speaker for the evening. Dr. Bargonetti is a Professor of Biology at Hunter College and a reviewer of prestigious science journals for the American Association of Cancer Research. She graduated from SUNY Purchase with a degree in biology and dance, and received her master’s degree and Ph.D. in biology from New York University. Dr. Bargonetti is also a recipient of the Presidential Early Career Award for Scientists and Engineers, which President Bill Clinton awarded to her in 1997.

Dr. Bargonetti began her speech with an homage to her two passions: dance and biology. . Although the two disciplines  are seemingly disparate, Dr. Bargonetti’s interdisciplinary passions resonated with many students. “I really identified with Dr. Bargonetti because there was a question about how her dance background influences her current work,” said Alexandra Weiss ’20. Inspired by Dr. Bargonetti, Weiss was able to connect her academic interests with her love of dance: “As a ballet dancer of over ten years, I think it would be really cool to find a way to incorporate dance into psychological research,” Weiss said.

Dr. Bargonetti continued her speech with anecdotals from her Bronx Science experience and even shared a photo of her and her friends sitting on the same iconic front steps that our current students still walk by every day. She discussed learning about feminism from her favorite class at Bronx Science, ‘Women in Literature.’ “The biggest book for me was A Room of One’s Own,” said Dr. Bargonetti in her speech. This book taught her a crucial lesson: “As a woman, you have power, and you can do what you want as long as you make the space for yourself.” Dr. Bargonetti’s speech resonated with many students in the room. “I thought her speech was extraordinary,” said Daniela Castro ’20.  “As someone that also has many branching interests that do not intersect, it was nice to see a Bronx Science alumna pursue different passions but still be able to find the right job for herself,” she said.

Dr. Bargonetti concluded her speech by discussing the research that she conducts on the tumor suppressor protein, p53, its mutant counterpart, and their relationship to DNA and cancer.  Her speech was followed by an interview conducted by a Bronx Science student and fellow researcher, Emily Chan ’20. Chan said she was initially quite nervous to interview Dr. Bargonetti. “Coming from a student in the midst of the college process, I am used to being interviewed and answering questions,” Chan said. “This was really the first time that I was the one in control of the flow of the conversation,” she said. One thing that Chan noted was the gravity of Dr. Bargonetti’s speech in discussing the struggles that women and people of color face while trying to enter the STEM field. “It is hard enough to become an accomplished scientist, but she had to overcome a lot of obstacles to do so,” said Chan. “[Her interview] made me realize that although current systems have a long way to go, they have improved a lot in being more inclusive.”
“I thought her speech was extraordinary. As someone that also has many branching interests that do not intersect, it was nice to see a Bronx Science alumna pursue different passions but still be able to find the right job for herself,” said Daniela Castro ’20.