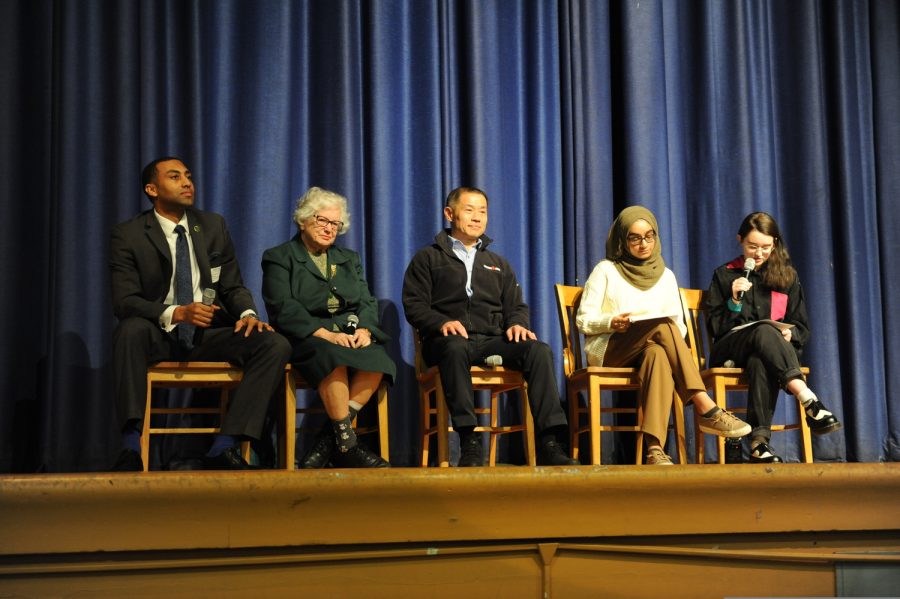 On February 7th, 2020, three esteemed Bronx Science alumni visited to hold an open panel for students during an assembly in the auditorium. New York State senators Jamaal Bailey, John Liu, and Toby Stavisky were greeted by a packed auditorium, buzzing with energy. To watch the video of this assembly in its entirety, click on the video above.

Jamaal Bailey represents the 36th District of New York, which covers a large portion of the Bronx. After graduating from The Bronx High School of Science in 2000, he studied at the University at Albany. He then continued on to study at the Community and Economic Development clinic of CUNY Law. Among others, Senator Bailey is a part of the New York City Education committee and the New York State Black, Puerto Rican, Hispanic and Asian Legislative Caucus.

Toby Stavisky represents the 16th District of New York which covers a large part of Queens, including Flushing. She attended Syracuse University on an academic scholarship after graduating from Bronx Science in 1956. In 2016, the Presidential Medal was awarded to Senator Stavisky who received the medal for her “exceptional and longstanding commitment to public higher education.” Currently, she is the Chairwoman of the Senate’s Committee on Higher Education and the Vice Chairwoman of the Democratic Majority Conference. Senator Stavisky was the first woman from Queens County to be elected to the New York State Senate.

As the panel began, the senators voiced their excitement to be back at Bronx Science. “Here we are, three elected officials, and our jaws dropped when we saw our high school yearbook pictures [on the posters outside],” Senator Stavisky told the audience, laughing. For the record, her yearbook quote was a pun on Shakespeare’s famous line in Hamlet, “Toby or not Toby, that is the question.”

“I spent most of my time in the east gym playing basketball,” said Senator Bailey. “Science taught me…what diversity actually is.” Beyond being a place for learning, he  added that Bronx Science forms a community of students to enact real change. “What you’re going to learn is that the same people that you graduated with, the same people that you go to class with, in twenty years, you’re still going to be in contact with them,” Senator Bailey told the room of Wolverines.  “Those people are the people that you’re going to be changing the world alongside. Period.”

Led by student moderators Ayesha Khan ’20 and Edie Fine ’21, the panel covered a range of critical topics. Notably, the senators discussed diversity in schools in relation to the SHSAT, a test that Bronx Science uses as the sole criteria for admittance.

“I think there’s a very clear consensus, not just among senators but among all of the city and state, that the results that we have seen [from the SHSAT] in recent years are totally unacceptable. To see such a small portion of the people being admitted…being of African American or Latinx descent, it’s just woefully inadequate,” said Senator Liu to the nods of Senator Bailey and Senator Stavisky.

“The issue and the controversy is not about whether those results are acceptable,” the senator continued. “The controversy has been about what to do about those results. Some, including the mayor and the chancellor, have said that we should just get rid of the SHSAT. That is an answer that I do not accept.” Students voiced their agreement, as applause filled the auditorium. “I’ve made it very clear that as long as I’m around, that’s not going anywhere.”

Rather than abolishing the SHSAT, the senators strongly supported intervening in earlier years. “We have to do a better job of going into black and brown communities and speaking about what education opportunities exist in the city of New York,” Senator Bailey told the crowd. “Pipelines exist in certain communities, and we don’t want to take those pipelines away, but…we should be able to create pipelines that create diversity.” Senator Liu continued, “We need to look at the earlier years. It’s not just about preparing for the test, or studying for the test, it’s about making sure that all the kids in this school…have the same kind of opportunities.”

But efforts to encourage diversity shouldn’t just be focused on the general student population, the senators agreed. “I did not have a black male teacher until Mr. Lloyd Burkett, during junior year [at Bronx Science], in aerospace technology,” said Senator Bailey. “He was the first African American male teacher that I saw. In my life. What is that saying about our educational system?”

As Senator Bailey so aptly put it, diversity is not just a “buzzword” for these three. “Take a look at us,” Senator Stavisky said. “We are diversity. Geographic, gender, ethnicity, everything. We are three very diverse people.” Senator Stavisky was the first woman from Queens County elected to the State Senate, and Senator Liu was the first Asian American New York City Council Member and Comptroller.

Moving on from education, Edie Fine asked if Senator Stavisky thought the political landscape for women had changed since she had first gotten involved. “I am so happy that it has changed dramatically. For a long time, I was the only woman from Queens, for the most part, in the State Senate,” Stavisky said. “I think women have always had a different perspective in terms of election. It has always been more difficult for women to get elected…[because] women do not have access to the old boy network, so to speak. Women traditionally do not offer themselves as candidates…That changed, I think, with the Me Too movement, and I think it’s fresh air… It’s about time, but we’ve stopped waiting.”