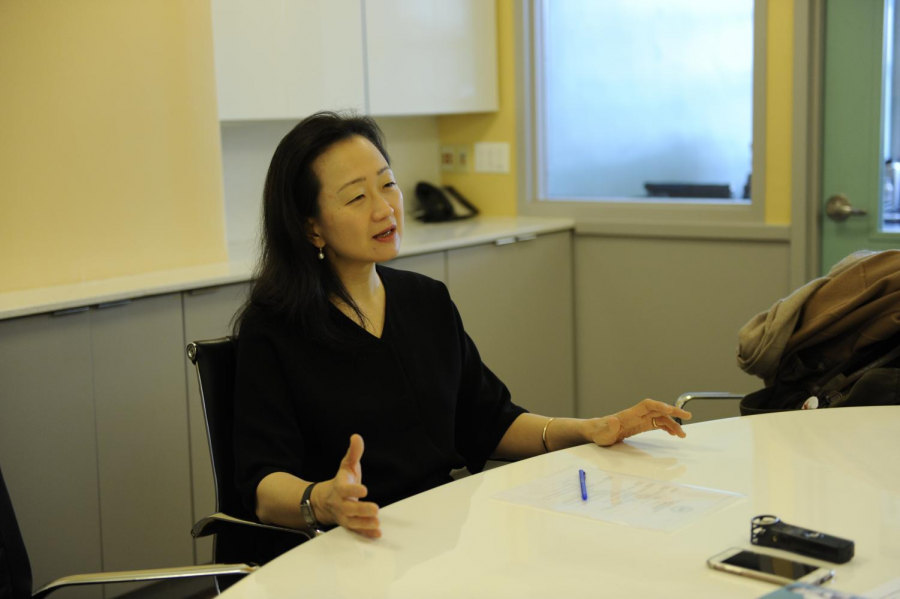 Min Jin Lee ’86 discusses her book and her experience at Bronx Science with staff on the Science Survey during her interview in December 2017, paying a visit to be inducted into the school’s Hall of Fame.

A Bronx Science alumnus, Lee and her family immigrated to Elmhurst, Queens from Seoul in 1976, when she was seven years old. She graduated Bronx Science in 1986 and then attended Yale University where she studied history. There, she was awarded the Henry Wright Prize for Nonfiction and the James Ashmun Veech Prize for Fiction. Later, she attended law school at Georgetown University and worked as a lawyer in New York for a few years before becoming a writer.

Lee’s first novel, Free Food for Millionaires, was published in 2007. In the tenth anniversary introduction to the book, she described her journey as a writer who never received a formal Master of Fine Arts degree from an elite institution due to personal and financial circumstances.

She first got the idea for the book while still a student at Yale. From 2007 to 2011, Lee lived in Tokyo where she researched and wrote the multigenerational story about a Korean-Japanese family. It was a finalist for the National Book Award for Fiction and one of New York Times’ “The 10 Best Books of 2017.”

Pachinko was picked up as a series by Apple in early 2019. Soo Hugh, a Korean screenwriter, wrote the script and will be the executive producer and showrunner of the series. The show will be translated into three languages: English, Korean, and Japanese.

Lee is currently working on her third novel, American Hagwon, the final book in her trilogy “The Koreans,” which, as she told the Asian American Writer’s Workshop, “will focus on what education means to the Koreans, how we understand education, and how it is related to wisdom.”

Speaking about her writing process in an interview with Writer’s Digest, Lee says her books start as a “big idea, which becomes about people, and of course the central thrust of my work is diaspora. How does diaspora figure into these questions? I am asking for these Koreans around the world.” She spends an enormous amount of time and energy on research for her novels, interviewing and doing field work. In an interview with Sampsonia Way, Lee reveals that oftentimes she uses only two percent of the information she gleaned for her characters, attempting to create an alternate world that has an emotional verisimilitude without regurgitating her interviewees’ stories as they are.

In the same interview with Sampsonia Way, Lee discusses what she values in literature. “If you’re not edified and entertained, I think you should go to the next book. I really can’t stand it if I have to read a book and think, ‘I am learning a lot but this is killing me; it’s so boring.’ For me, reading has always been about pleasure, and there should be pleasure in a book,” she said.

With her own brilliant writing and years of expertise, Lee is sure to impart some wise words of advice to the Class of 2019.

“Ms. Lee is a brilliant and successful writer and a rising star among the Bronx Science alumni community. We wanted to honor her and give her the opportunity to address the Class of 2019,” Mr. McNickle, the Senior Class Advisor, said.