The Hall of Fame: an Ever-Growing Timeline of Legendary Alumni 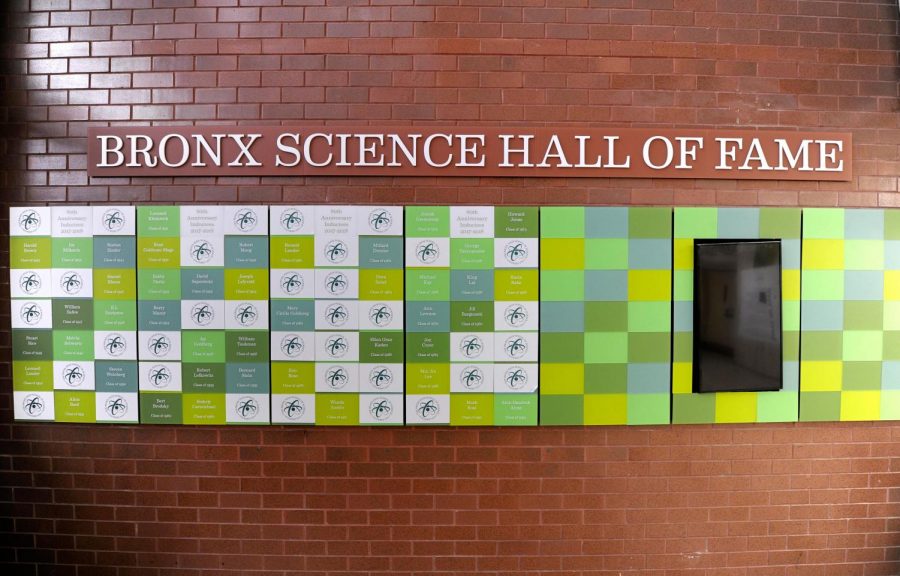 The Hall of Fame, pictured above, is an installation in the Bronx Science lobby which displays the names of esteemed alumni.

In 1938, Bronx Science was founded to provide a unique education to students with interests in science and math, creating an educational foundation for years to come. Over the decades, students and faculty have contributed to the unique character of a high school environment that Bronx Science prides itself on, showing extraordinary achievements in a breadth of fields beyond the initial vision. As expected, the number of memorable alumni increases annually.

As a reminder and keepsake of these outstanding careers, the Alumni Foundation has established the Bronx Science Hall of Fame. In conjunction with the 80th Anniversary of our school, eighty of the most esteemed graduates have been inducted into it. This continuing project not only commemorates some of the historic achievements of our alumni, but also serves as a reminder for generations to come as to where these outstanding innovators first got their start.

Scheduling the arrival and the induction of the alumnus/alumna is no small feat: each visit involves an interview with school media outlets, a lunch with a selected group of interested students, the formal induction into the Hall of Fame, and the assignment of a student as an ambassador to accompany the alumnus/alumna throughout the day with an interview in front of the student body.

“One of the coolest parts of the Hall of Fame project is having student ambassadors and connecting older generations with new ones,” Ms. Eleanor Coufos ’99, Vice President of The Bronx Science Alumni Foundation, said. “We wanted to touch as many students with this project as possible, so we cast a broad net into the student body, and we were met with phenomenal responses.

The quality of the introductions, interviews, and environment fostered by the students with the alumni has blown us all away.”
“As students, we’re always hearing about all of the successful Bronx Science alumni, so it’s cool that we have an opportunity to meet them,” Natasha Stamler said.
Assigning a student to spend the day with each alumni was a unique aspect of the Hall of Fame that not only made it more immersive, but became a key aspect in the Hall of Fame’s impact on a large scale.

“We want the Hall of Fame to serve as an inspiration for students today,” Ms. Phoebe Cooper, Assistant Principal, Organization, stated. “There’s a wide range of professions garnering success among these alumni, and it’s great to see how all their different experiences at Bronx Science got them to where they are today.”

Natasha Stamler ’18, the student ambassador for newly inducted entrepreneur Howard Jones ’74, believes spending the day with an alumnus was an experience that she always wanted.

“As students, we’re always hearing about all of the successful Bronx Science alumni, so it’s cool that we have an opportunity to meet them,” Stamler said. ‘We can see that what they achieved is possible — they are real people like us, and if we work hard, maybe we could be like them too.”

It’s not only for current students and faculty that the Hall of Fame offers a distinctive opportunity; for the honored alumni, returning to Bronx Science has been a special day. Frequently, they request to visit specific parts of the building, citing some of their own favorite memories as they are reminded by younger generations that the initial vision of the school has remained constant.

“We definitely take for granted the extraordinary history and success that this school has fostered,” Coufos ’99 noted. “The Hall of Fame is the first thing in the school that not only honors that, but will also continue to grow and be part of our history.”

Alumni far and wide, diverse in their discoveries, and unique in their experiences, trace their roots back to Bronx Science and credit our school for the foundation upon which they built their future successes. Now, they celebrate their achievements alongside each other with the newly created Bronx Science Hall of Fame, and in many cases, returning to Bronx Science to meet with our students and to share their advice.