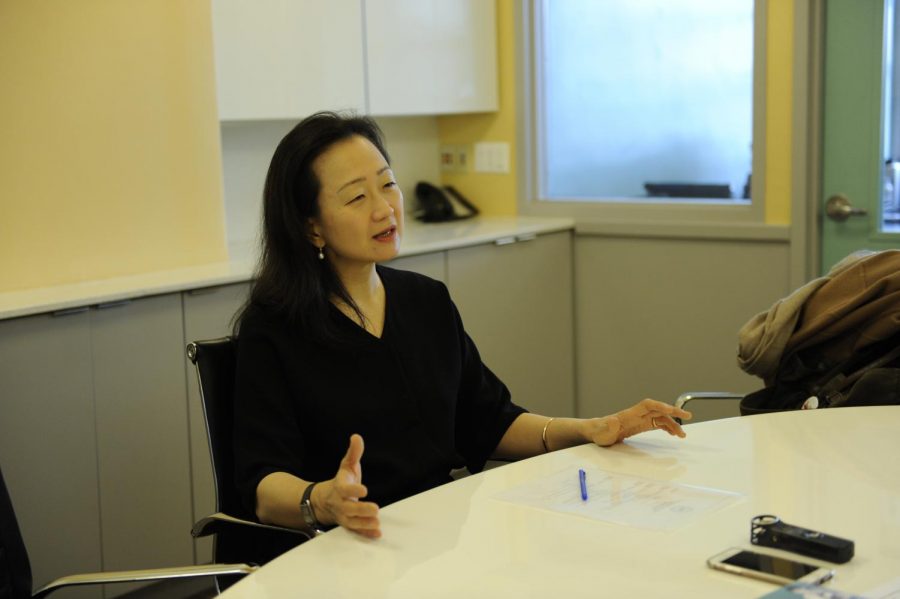 Min Jin Lee ‘86 tells The Science Survey about how she wrote her book and her experience at Bronx Science in an interview.

“History has failed us, but no matter,” begins Bronx Science Class of 1986 alumna Min Jin Lee in her award-winning novel, ‘Pachinko.’ On December 4, 2017, Min Jin Lee paid the school a visit to be inducted into the Hall of Fame. With two published books, Lee has quickly gained praise for her writing and excellent prose. Her first book, ‘Free Food for Millionaires,’ was named one of the Top 10 Novels of the Year by The New York Times. Earlier this year, she published ‘Pachinko’, a multi-generational novel that follows a Korean immigrant family living in Japan during the 1900’s. Her second publication took the literary community by storm, when she was named a National Book Award finalist, and when the book was placed on the list of 10 Best Books of 2017 chosen by The New York Times.

‘Pachinko’ is a raw and gripping multi-generational family story. It starts with Sunja, the daughter of a poor fisherman and his wife, and her decision to reject the wealthy father of her unborn children who lied to her, instead choosing to marry a tubercular minister. So begins a story of her family and their trials and triumphs in a foreign land in a time of war.

Based on the real experiences of Koreans living in Japan during that time, Lee stressed how much research and own personal experience went into telling the story of Sunja and her family.
“I think that if I did not go to Japan, I could not have written this book. But when I did go there, I interviewed everybody, and I learned everything I possibly, humanly could about the Korean-Japanese people,” Lee said. “I read every single academic text I could get my hands on — I realized that I had to write this story, and I wanted to do it as fairly as possible. In the end, it would be an American person writing this book. That gave me a kind of freedom to not be perfect.”

Now, after thirty years of multiple drafts and rewrites, Lee has completed the story she has wanted to tell for so long. “I always knew that I wanted to make this thing, but I didn’t know how. I didn’t feel like I could spend the money to get a masters in fine arts to become a writer, which is what a lot of people do nowadays. That delay, in a way, made me feel even more insecure and unconfident about what I would do with all of the opportunities that I had received and all that I had learned.”

Looking back at her four years at Bronx Science, Min Jin Lee recalls being in a classroom filled with brilliant minds and innovative thinkers. In fact, she could not help but be “dazzled by her classmates’ genius.” At Bronx Science, she acquired the skills that allowed her to write her novels. Attending Bronx Science meant so much to her, because it gave her a kind of integrity about thoroughness, the importance of research and a respect for innovation. The school also gave her a kind of ability to appreciate other people, be curious, and ask a lot of questions.

“But the truth is, at Bronx Science, I had gotten so many gifts that I didn’t even know how rich I was. I had no idea,” Lee said. “The gifts were not just the things that I learned. All the gifts that I did get were really my peers, the people that I met, and the interactions and the memories,” said Lee. In fact, the best gift that she received at Bronx Science was the ability to feel normal. She is incredibly grateful for her friends in high school who understood her and were able to relate to her quirky and shy personality. After Bronx Science, Lee went on to attend Yale University to study history and Georgetown University Law Center to study law. College made her realize how ill-prepared she was for so many things; however, it did equip her with a vast reserve of curiosity and a genuine affection for her peers.
Min Jin Lee recalls being in a classroom filled with brilliant minds and innovative thinkers. In fact, she could not help but be “dazzled by her classmates’ genius.”
Today, author Min Jin Lee is still most well-known for her opening line, “History has failed us, but no matter.” “History will absolutely fail you. It has failed me. It’s going on right now. History is failing us, but we have to remember that it doesn’t matter to the extent that we can’t give up, so we have to fight, be vigilant, and we have to care. Even though we are going through our own personal things, we have to think about the bigger things, and I think the purpose of education is for us to repair the broken world because the world is indeed broken,” said Lee.

A Brief Review of ‘Pachinko’ by Min Jin Lee ’86

‘Pachinko’ is easily one of the best books I’ve ever read. Despite being a historical fiction novel set in a complex time in our history, Lee’s novel is both interesting and informative. Her writing is rich with emotions. You feel sympathy for the characters and the constant discrimination they face, but you also feel elation when the characters achieve something great and excitement when you meet a new character. The book made me cry, laugh and smile all at the same time.

The best books should always make you feel something. ‘Pachinko’ made me feel like the world was in need in of change. Before reading the book, I was ignorant about the struggles that these Koreans faced in Japan. Likewise, I was ignorant about the hardships that immigrants faced. The book revealed the effects of gender inequality on a global level, when I thought it had only existed in America for the longest time. Most importantly, ‘Pachinko’ for me broke a barrier in Asian representation in the media. I have a huge appreciation for diversity in literature, and to see characters that were a reflection of myself in the pages of this book was an indescribable feeling. This is something that I think everyone can take out of reading ‘Pachinko,’ whether it is learning something new or reinforcing an idea. As Lee said, “My duty is to make the reader feel seen.”