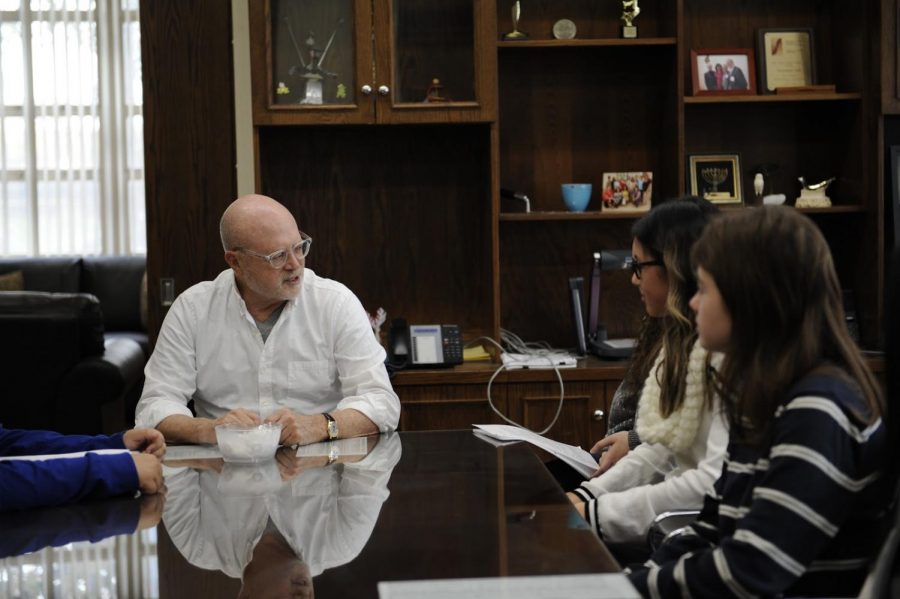 Mickey Drexler responds to questions posed by his interviewer, Sara Buklan, during a lunch with students.

On November 8, 2017, Mickey Drexler, Class of 1962, paid a special visit to The Bronx High School of Science, a place that had a significant impact on the rest of his life. Having grown up in the Bronx, stepping into Bronx Science was not, physically, a big transition for him. Emotionally and mentally, however, he was in a whole new world. Drexler describes his experience at Science as quite a difficult one. “I did not like school. It was not my favorite pastime. When I got here, having an 85 average, I felt like I was the dumbest kid in the class. I felt very intimidated and insecure,” he disclosed. He was also very shy growing up, adding to his challenge.

Despite these not-so-fond memories of school as a whole, Drexler insists that attending Bronx Science greatly impacted the course of his life in a positive way. “Because of Bronx Science, I went to college,” he said. He was the first member of his family to go to college, something he attributed entirely to the fact that every Bronx Science graduate followed this path.
Growing up, Drexler’s schooling was not his family’s primary concern. His mother, who was very sick for most of his childhood, passed away when he was sixteen. His father, who was more involved in his work than his son’s affairs, was absent from Drexler’s life. Due to this, Drexler credits his college degree to his time at Bronx Science, which pushed him to attend the City College of New York, followed by the University of Buffalo. He later received an M.B.A. from the Questrom School of Business. According to Drexler, he never really knew what he wanted to do, but he was always strong in math. “That was probably what got me into this school,” he hypothesized.

When connecting the dots from his primary education to his highly successful career, he began with his earliest work experience, which he received at a shockingly young age. “I started working when I was in the third or fourth grade, for my uncle,” Drexler explains. “I always worked as a kid … always had part-time jobs…mostly because my dad always forced me to work.” His first real jobs were at department stores: Bloomingdale’s, Macy’s, and Abraham & Straus (where he was merchandising vice president). However, he did not enjoy these jobs and did not stay at any for more than four years. He was then asked to run a company, Ann Taylor, which was much smaller and less popular back then. At age 35, he took over Ann Taylor and decided to stay for four years, until he was unsatisfied once again.

At that point, in 1983, Drexler decided to pack up and move to California. He raised his two children in San Francisco, where he ran Gap Inc. for eighteen years. Drexler is credited with the rise and success of this company, particularly during the 1990s, which granted him the nickname “The Merchant Prince.” After business went bad, however, he left the company, moved back to New York, and became the CEO of J. Crew. In his many years there, he rebuilt the company and reinvented its image into a popular, sought-after brand. Last June, Drexler stepped down as CEO of J. Crew. Although he remains chairman of the company, he has decided to explore other companies and interests. He invested in Warby Parker and Outdoor Voices, a small athletic-clothing company of which he is also chairman. He claims he is just “looking for new investments and trying to keep busy.”
“Adversity has
always been a great driver for me.”
Mickey Drexler is inspiring, not only for what he has accomplished, but for what he still hopes to achieve, and for whom he is as an individual. His sentiments continue to influence the next generation. “At this point in my life, at this age, I still want to go out there, and I want to create, and I want to do,” Drexler said. He loves to work and learns something new every day. When asked about the challenges that he has faced, he insisted, “Adversity has always been a great driver for me.” When asked how he achieved such great success at Gap, he asserted, “I keep in my mind a picture of what things should look like.”

After speaking with Mr. Drexler and listening to him relate his story to current Bronx Science students, we can all realize it is not simply his resume that we should admire; it is his determination, honesty, and outlook on life that make him a wonderful role model for the next generation of Bronx Science graduates.