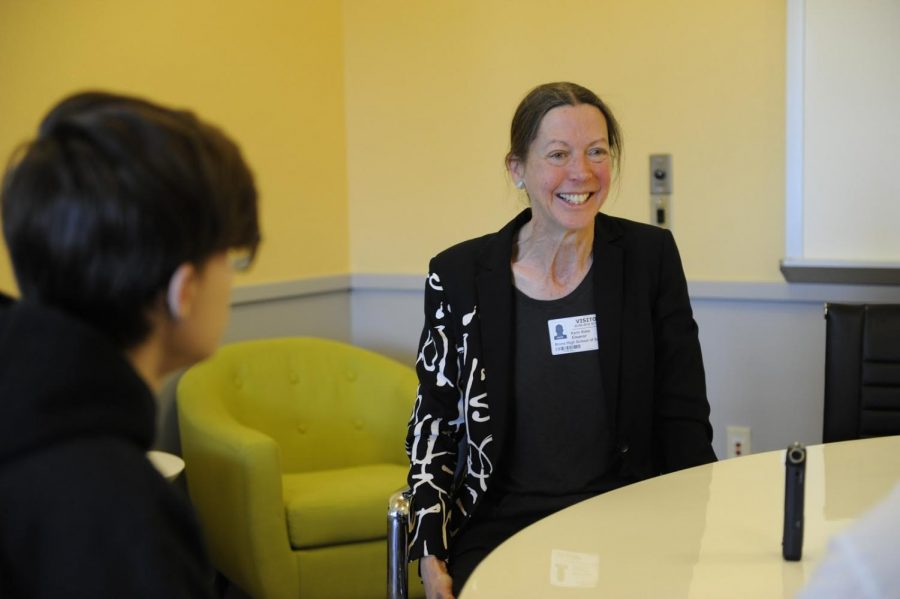 Karin Rabe, Class of ’78, is now a computational materials physicist with a particular interest in the use of quantum-mechanical calculations for the study of phase transitions and the theoretical design of new materials. Rabe returned to Bronx Science and was inducted to the Hall of Fame on February 8, 2018 .

Before she discovered breakthroughs in this relatively new field, Rabe began her interest in research at Bronx Science. Like many Bronx Science students, Rabe participated in a biology research class, similar to Regeneron. She studied the germination of seeds based on whether they were dormant or fresh and how light would affect their growth.

Rabe praised the research program for how much it has developed since then. “A huge thing in your science career is finding the right mentor, because if you have the right mentor, doors will open for you, you will get more opportunities, and you have someone looking out for you,” Rabe said.

Rabe has personally experienced scientific growth with her own mentor, who introduced her to computational materials simulation. Rabe is glad to see the implementation of mentors to further develop young scientists’ minds at her very own high school.

Rabe believes that there is always a way to dig deeper and find something new. She continues to look back on old research with an open mind and willingness to apply different measurements and calculations. Rabe also opened up about her experience working in the relatively new field of computational material physics. She recalls other scientists questioning her work, asking if she really found anything in her field that has not already been discovered.

Rabe dedicates her time to proving the effectiveness of a computational approach to designing new materials. She has been able to convince more and more people that making new materials in a lab is a technology that should be embraced, and takes pride in changing the views of others, believing its proven effectiveness is the biggest achievement of her career.

One specific concept she observed was the behavior of ferromagnetic and ferroelectric materials (materials with electrical polarization present). She computerized the model of a “boring” material that was neither ferromagnetic nor ferroelectric and was able to predict that if the material was thinned out, it would become both ferromagnetic and ferroelectric. She finds beauty in how no one else predicted this behavior, showing how she was able to benefit the scientific community with her discovery. “That is a good example of a real success for this kind of research,” Rabe said.

Rabe urges students who wish to pursue science to take advantage of any research opportunities presented to them and figure out their talent from there. “Doing any kind of research is the most important thing. From there, you go on and you discover what type of science is a good match for the way you think and what you like to do.”