From the Baseball Field to the Court Room 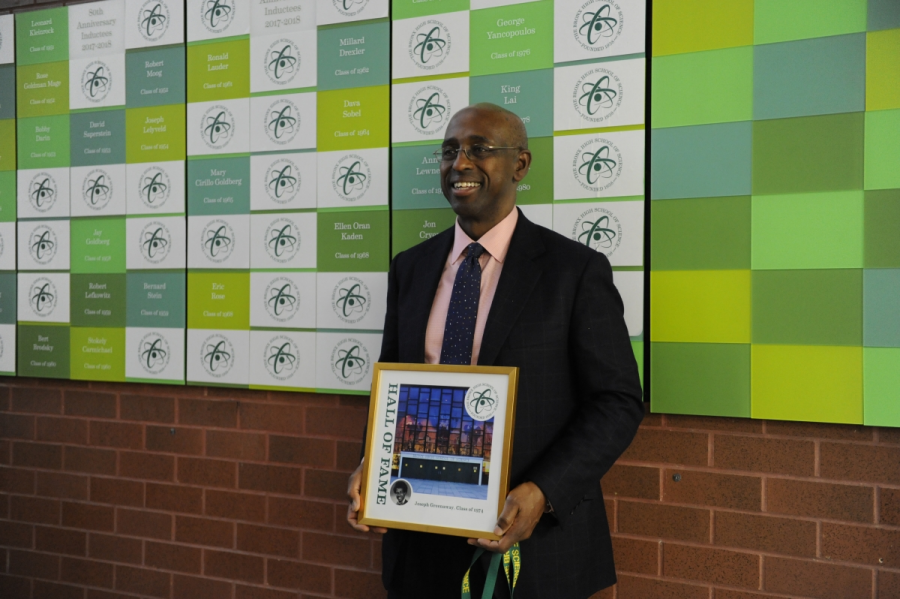 Greenaway accepts a plaque as he is inducted into the Hall of Fame.

Joseph Greenaway ’74 returned to the halls of Bronx Science on January 12, 2018 to be inducted into the Hall of Fame. Currently, he serves as a jurist of the United States Court of Appeals for the Third Circuit, a position appointed to him by President Obama in 2010. Before rising to such a prestigious position, he was a clerk for the late Honorable Vincent L. Broderick of the U.S. District Court for the Southern District of New York and the Chief of the Narcotics Bureau for the District of New Jersey.

Before he embarked on his law career, Greenaway was deeply involved in the school community. During his time at Bronx Science, he played for the Baseball team, was a member of the club football team, an S.O. Senator, and a member of the security squad. He has many fond memories of his teachers, particularly Mr. Minchenberg from the History Department, and Mr. Paul and Ms. Gelfand from the English Department. These teachers helped him feel like he had a place at the school amongst all of the emphasis on the STEM curriculum. Specifically, he notes that studying the Magna Carta and English law in class brought about his professional interest in the subject.

Greenaway sees law as one of the most fascinating and relevant fields to work in because of its constantly changing nature and it great value to society. One of his most memorable cases was focused on how to provide relief to those who were subjected to slave labor to build ammunitions for World War II. The law provided no clear answer on what should be done, and after working with a team of lawyers, a 120 page opinion, and ten possible outcomes, they decided to dismiss the case. He said that he was proudest of striving throughout his career for justice; “The most difficult thing about being a judge is making sure that you are focused on the right things day to day, which is trying to do justice, trying to maintain excellence, and making sure that your decision making is transparent.”

Looking back at his school days, Greenaway is most fond of his time on the baseball team. He came back to the school with an entourage of old teammates. “When we played DeWitt Clinton, we were all over the moon. That was our senior year. We left in style.” His proudest moment on the team was when they had finally beaten Clinton. He was also a fan of football and was a member of the club team at the school; students often gossiped about the possibility of funding a football team with the money that was instead spent on the then-new mural.

Greenaway’s biggest lesson from Bronx Science was learning the commitment to excellence, the value of personal passion, and how all students who pass through these halls are connected to the school’s rich legacy. His advice for students at Bronx Science is to
“Follow your passions. It was hard not being a science person here …a focus on your passion…[will] allow you to go through the ups and downs of life and still stay on track.”