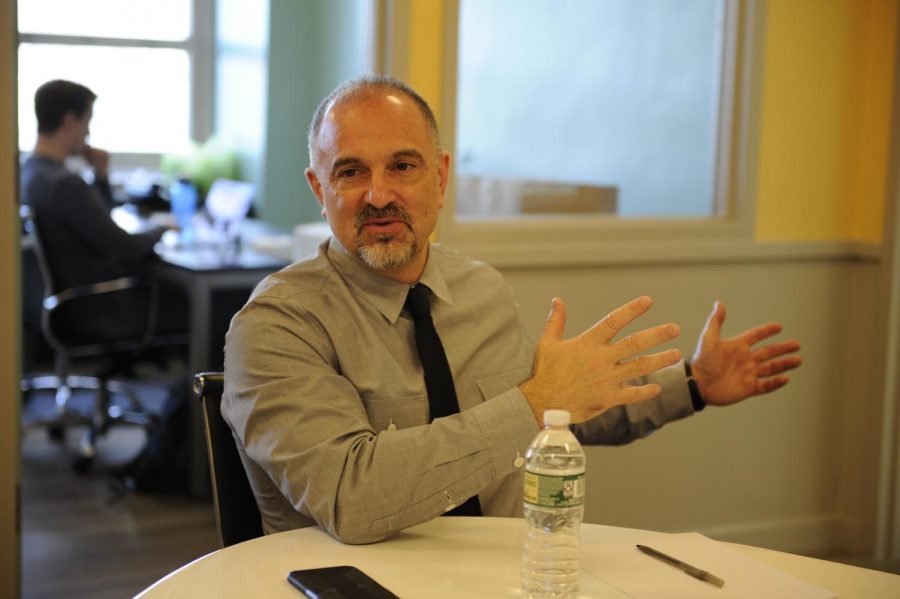 Yancopoulos responds to a student’s question during a discussion.

It all began on the MTA public transportation system, riding the subways from the depths of Queens before sunrise to go to Bronx Science.

Why make the long, arduous journey to study here? According to George Yancopoulos ’76, and now Chief Scientific Officer of Regeneron Pharmaceuticals, it was because it had science in the name, and that’s what mattered most. From a very young age, Yancopoulos was fascinated with how lizards regrow their tails. This propelled him into the sciences, and more specifically, the regeneration of cells. While at Bronx Science, he took the initiative to begin his own experiment, investigating how the single-celled organisms known as blepharisma regenerate their digestive parts when they are destroyed.

On Tuesday, November 21, 2017, Yancopoulos returned to the Bronx High School of Science to meet with current generations of bright students, to visit the place that made him who he is today, and to be inducted into the newly created Hall of Fame. He had lunch with students and spoke in the auditorium, the same auditorium that he once sat in, listening to the scientists and innovators of the time.

A very important influence and mentor to Yancopoulos during his early career days was Roy Vagelos, a first generation Greek immigrant who is also an amazing scientist and person. When he was young, Yancopoulos’ father wanted him to be like Vagelos, and gave him a newspaper article about him leaving Washington University to join Merck as head of Research & Development. Years later, Yancopoulos decided to call him for help running his new company Regeneron, and Vagelos not only returned his call but ended up becoming the chairman of the company for the past twenty years! Today, Yancopoulos has come far from his days of traveling in the early hours to Bronx Science to study thecell regeneration. He is the chief scientific officer of Regeneron Pharmaceuticals, a company that was started and is run by scientists. When asked what his plans for the future are, Yancopoulos explained how he and Regeneron are excited for the future.

They are now working with every disease including cancer, heart disease, and immunological diseases. The company is also now working a lot with human sequencing. Yancopoulos believes that we need to come together and exchange ideas to begin to solve all of the problems in our world.

Yancopoulos came into Bronx Science an aspiring scientist and is now a world renowned one. “If you are surviving at Science, you can survive anywhere,” he said. He shared his experience with current students, and we can all learn from his amazing accomplishments and hard work.