The Dawn of an Infinite Horizon 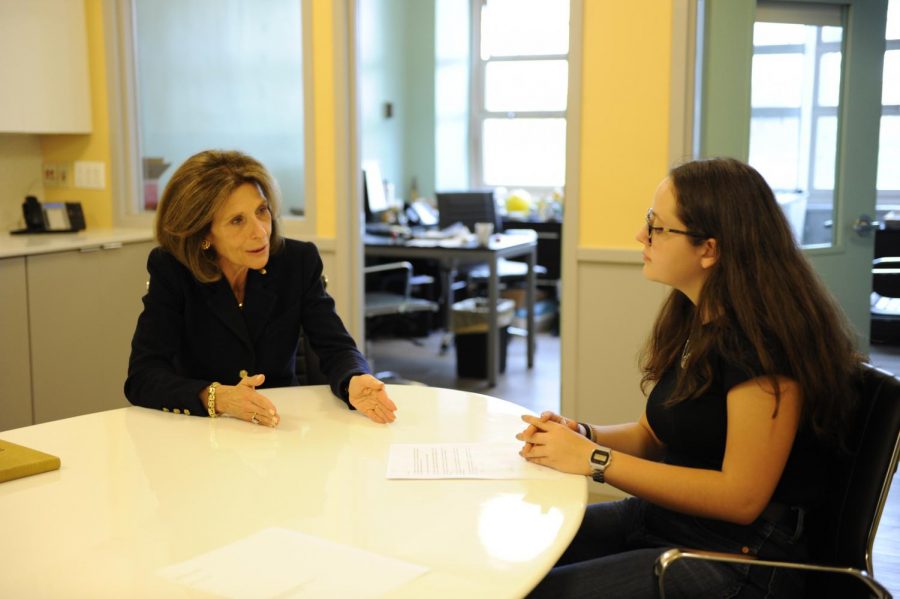 Ellen Kaden discusses the impact that Bronx Science has had during her career, with Leah Yoes '18 for The Science Survey.

Ellen Oran Kaden graduated from Bronx Science in 1968, arguably one of the most tumultuous years in contemporary American history. The rise of the anti-Vietnam protests, the Civil Rights Movement, and the assassinations of Martin Luther King Jr. and Robert F. Kennedy marked the conflicts shaping our country at the time. Despite these challenges, Bronx Science students were looking outward and preparing to enter the chaotic world awaiting them. Kaden graduated as the salutatorian alongside a female valedictorian, only eighteen years after Science began accepting women into both the student body and faculty.

Kaden spoke to the virtue and capacity of her peers, and the fostering of a community in which the barriers of gender dissipated.
“One place, very early on in my life, where I did not feel that being a woman was a liability, or a potential liability, even way back then, was Bronx Science…I never felt, while I was here, that anyone questioned the ability of the women students to learn, to participate, to be engaged, to have leadership roles, to excel.”
After graduating from Bronx Science, Kaden continued to pursue rigorous academics with an unbounded curiosity at Cornell University for her Bachelor’s degree, The University of Chicago for her Master’s in American History as a Graduate Fellow of the Danforth Foundation, and finally at Columbia Law School as a James Kent Scholar and a recipient of the Charles B. Beck Prize and the Young B. Smith Prize. Kaden spoke to the invigorating experiences of the academic world, which began at Bronx Science in studying “heaps of sciences,” as well as classes in the social studies and literature.

Kaden utilized her time at university to thoroughly explore the “joy of learning,” before clarifying her interest in the intersection of society and justice and entering law. She noted a particular interest in the cultural, religious, and legal structures that dictate society, which ultimately led her to corporate law, which she has both taught, at her alma mater Columbia Law, and practice. Kaden has had a diverse and prominent career, serving as the general counsel of CBS Inc. in the early nineties and later as the chief legal officer of Campbell Soup Company, where she oversaw global and community affairs.

Since her four years at Science, Kaden has continued to be a trailblazer for women in the academic and professional world. In her major corporate legal work, she has fostered diverse and representative communities, earning her the Aiming High Award from the National Organization of Women’s Legal Momentum, which recognizes remarkable female leaders whose initiative has broken new ground in business and gender equality.
Still, in retrospect, Bronx Science was the foundation of her dedication to furthering knowledge. “I was exposed to areas of thought, areas of study, chapters of the human mind of which I had absolutely no inkling, and it was exhilarating to have that. It was at Science that I learned how to think, how to analyze, how to see different points of view, how to understand, how to reconcile or try to reconcile them,” said Kaden.

Bronx Science was “a life altering experience,” for Kaden. It completely changed the ways in which she thought, and it opened her mind to challenges that she could not have imagined, through instilling a high regard for hard work. It was this respect for intelligence, diligence, and motivation that propelled Kaden forward. Her boundless determination gave her the strength to persevere when she was often the only woman in the courtroom or on the case. “The thing that I learned at Bronx Science, more than anything else, is that the horizon is absolutely enormous. There were fields of studies, areas of the mind, that I had no idea existed. The joy of discovery, the experience of discovery was huge,” said Kaden.

Kaden sought beyond this horizon with an unshaken tenacity. Her legacy is reminiscent of the vigor and vivacity that Bronx Science cultivates.