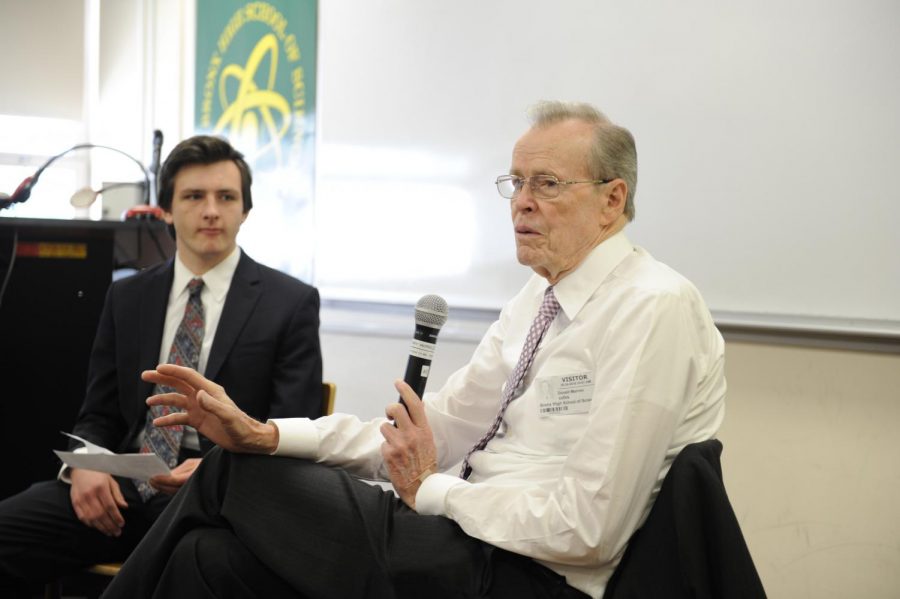 On May 24, 2018, esteemed Bronx Science alumnus Donald Marron ’50 paid a visit to his former high school. As a renowned financier and entrepreneur, Marron’s numerous accomplishments and contributions to his field have been remarkable. He returned to be recognized for these achievements through his Hall of Fame induction in honor of the school’s 80th anniversary.

During his visit, Marron spoke to students about his career and shed some light on his successes. He explained how, following his graduation from Bronx Science at just fifteen years old, he went on to study at Baruch College and launch his career in finance. Marron founded a company, D.B Marron & Company, quickly after leaving college, which would go on to be one of the top equity research firms in the world under his leadership.

Marron has been at the helm of several important organizations, including Paine Webber and UBS America, in addition to his own formidable ventures of Data Resources Inc. and Light Year Capital. Each of these were leading firms which contributed to innovation in the finance industry. Most importantly, he got his start at the Bronx High School of Science.
“Don’t be afraid to fail. This is a society where if you fail when you’re young, everyone will forgive you.”
In what he described as “the old American story,” Marron left for Wall Street because he simply needed to make money and support his family. He founded his first firm, which would ultimately be very successful, after putting in a few years working at a bank. When finally started building D.B. Marron & Company, he made “every mistake you could possibly make,” as he put it.

But for him, this experience was less of a momentous setback and more of a learning opportunity, and one he can pass on to the next generation. “Don’t be afraid to make mistakes,” he advised students. “Don’t be afraid to fail. This is a society where if you fail when you’re young, everyone will forgive you. Just don’t make the same mistake again in the same week.”

There are many lessons to be found in the extraordinary life Marron has led. His commitment to charitable and non-profit undertakings have played a major part of his journey. Currently he serves on the board of New York University, the Museum of Modern Art, the Council on Foreign Relations, and the Coalition for the Homeless.

Surprisingly, he has also found success as an art collector. This may seem like an unusual collection of engagements for a businessman, but they each contribute to his life philosophy. He explained to students that it is essential to do three things. First, the primary venture (his business). Then, you need an additional interest (art). And finally, the philanthropic component (his charitable endeavors).

In addition to the many life lessons he offered current students of his former school, Marron shared insight on how to best lead a life and career in finance. He shared priceless bits of wisdom, acquired over decades of experience, to a rapt and attentive audience. Be careful who you go into business with, he warned. Network with the very best, and go to a school where you can get the best connections. Start at a mid-level firm, and don’t stake your life on just one idea while you’re young. Most importantly, remember: “Capital will follow talent and good ideas.”

The opportunity to gain knowledge of the field from one of the schools most distinguished and accomplished alumni was certainly not lost on the group of students to whom he spoke. “It was amazing to talk to Mr. Marron,” student ambassador Max Porlein ’18 said. “He really stressed the importance of networking and creativity when it comes to being successful in the business world.”