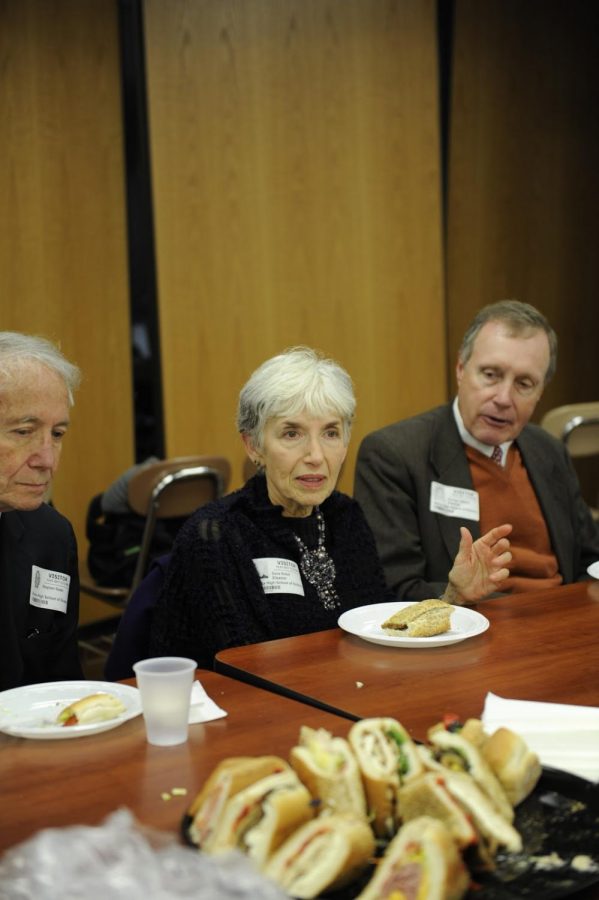 Joined by members of her publishing team, Sobel discusses her career over lunch with students.

Bronx Science holds a different significance to each student that passes through its halls, leaving them with countless memories and setting them up for the future. For Dava Sobel, class of 1964, Bronx Science is the bearer of some of her fondest memories, and the place that started a career journey that took a number of turns, before ending in the highly successful place she is today.

Post-Bronx Science, Sobel graduated from Binghamton University in 1969, moving through a number of different majors before settling on writing. She attended a lecture by Carl Sagan, the American astrophysicist and author, which she cites as a turning point in her life. Sobel was paid $5 to write an article for a local newspaper about the lecture, and after it was well-received and landed her a full-time job, her career writing about science set off. “My mother says it’s the best $5 I ever made,” said Sobel.

Now, Sobel is the author of eight books about science, and throughout her career has also worked as a science reporter for the New York Times covering topics in psychology and psychiatry. Sobel notes that these fields were not her area of expertise, but says that she settled into the job by giving herself no other option but to write. “If you really want to do it, eventually you will. You just need to put your head down and get it done,” said Sobel. She has also taught at the University of Chicago, among other colleges, teaching the ins and outs of science writing.

One of Sobel’s most acclaimed works is the novel “Longitude,” which tells the story of John Harrison, the man who created the first clock to be used to determine longitude at sea, solving one of the most important scientific problems of the seventeenth century in the process. In “Longitude,” Sobel interweaves fascinating scientific descriptions with the page-turning suspense of a fiction novel, allowing for people of vastly different interests to enjoy the book. “These are science books for people not into science,” said Sobel. “People grow up thinking of historical figures as marble busts. I wanted to make them into actual people, so these stories could be enjoyed by everyone.”

The root of her extremely successful and meaningful career can be traced back to Bronx Science. Sobel cites the academic motivation of her peers, student diversity, and excellent teaching standards as factors that she carried with her into post-high school education, as well as adulthood. While she hadn’t stepped foot in the building in many years, Sobel still fondly holds many intricate memories of her time here.