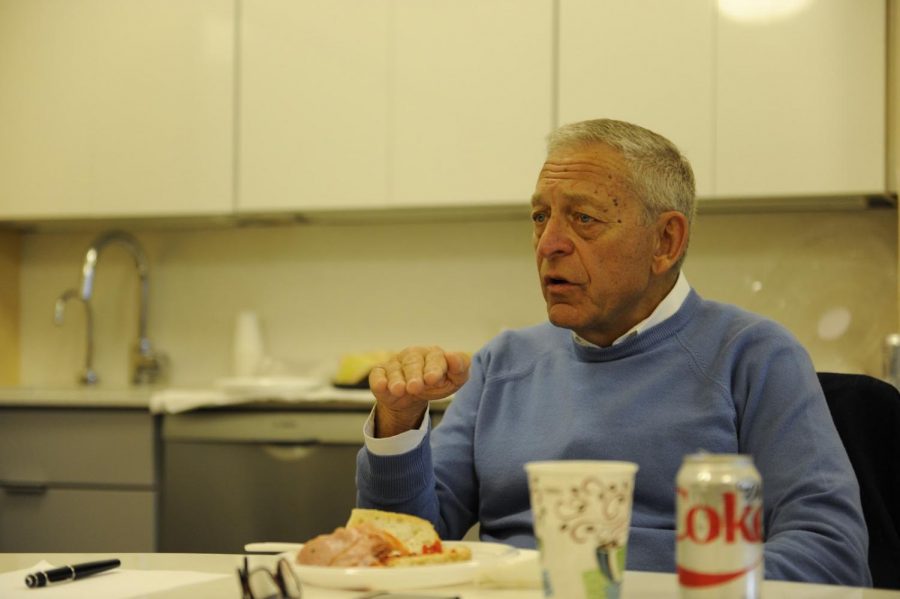 Brodsky sits down with students to talk about his time at Bronx Science.

For Bert Brodsky, ‘work’ is business. From a young age, Brodsky has been a savvy entrepreneur. “My whole life I wanted to be in business. When I was twelve years old, I would collect the empty bottles on the beach and turn them in for two cents each. I would sift the sand for money.”

On December 12, 2017, entrepreneur and investor Bert Brodsky ’60 came back to Bronx Science as an inductee in the 80th Anniversary Hall of Fame.Brodsky founded his first company, Medical Arts Office Services, Inc., ten years after his graduation from Bronx Science.

Brodsky has come far from his humble roots. He grew up in the Bronx and was the only one of his friends to attend Bronx Science. From the moment he walked through the gilded doors, Brodsky felt out of place. While most students knew the answer to any question off the top of their heads, Brodsky had to spend hours in the library researching and reading.

“On a personal level, I didn’t think I was smart enough to be here,” Brodsky said. After failing his first semester, he wanted to transfer out of Bronx Science. But his guidance counselor told him, “You belong here.” Brodsky’s guidance counselor convinced him to stay for one more semester, and by the end of that time, Brodsky had made friends, boosted his grades, and wanted to continue his high school career here.
“Even then, they were starting to sell pool passes.”
For all of the struggle, Brodsky remembers Bronx Science fondly. He was part of the first class to graduate from the new building. “Even then, they were starting to sell pool passes.”

While Brodsky always knew that he was meant to pursue a career in business, his mother felt differently — she wanted him to become a doctor. Brodsky went to CCNY to study the medical profession, but after flunking out of his third semester, CCNY would not let him back. “By then, my mother gave me a release. It would be more embarrassing to say that I didn’t go to college, than to say I wasn’t a doctor.”

Brodsky had failed almost every course he took the first three semesters, but was still able to graduate, with a degree in Finance and Economics, in the alloted four years, largely due to his determination. He went to night school and summer school, he changed his degree, became the president of multiple societies, and was the student speaker at his graduation. “My whole college career turned around.”

Brodsky’s big break came when he was interning at a finance company. On a day like any other, Brodsky was given a tedious, boring task, which involved going to a warehouse to survey and count a stock of records that the company owned. Most people would have counted the records and left immediately, but not Brodsky. Something told him to look inside the record jackets, and he was astonished to find that there were no records!

In this moment, Brodsky had suddenly been gifted an extreme amount of knowledge, and how he decided to use that knowledge was power. After mulling it over, Brodsky decided to take this information to an important supervisor, one who thanked him for his discretion. This moment marked Brodsky’s transition into the world of business; he was no longer seen as an intern, fresh out of CCNY, but a professional force to be reckoned with. Brodsky eventually became vice president of the company, at the age of thirty-three.

Throughout his career, Brodsky has accomplished a considerable amount; he has won countless awards, including the 2000 Ernst and Young Master Entrepreneur of the Year for the State of New York, the Townsend Harris Medal for Notable Achievement from the Alumni Association of the City College of New York, and the honorary degree Doctor of Humane Letters for his philanthropic endeavors. For all of his success, Brodsky realizes the importance of giving back and has become the Founder and Chairman of the Board of the Alzheimer’s Foundation of America. Brodsky is not only business savvy, but inventive. Brodsky established the National Medical Health Card Systems, in addition to recognizing and investing in a world-renowned machine called the MRI.