Uncovering the Truth for Over Half a Century 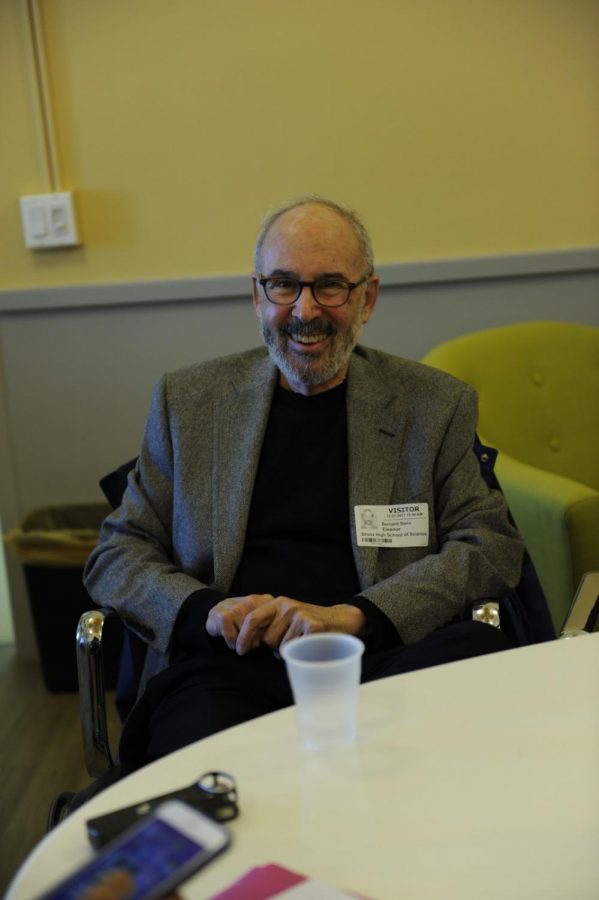 Journalist Bernard Stein ’59 visits Bronx Science, where he was the Editor-in-Chief for The Science Survey.

Mass-arrests? Firebombs? If you can name it, Bernard Stein ‘59 has experienced it, over half-a-century of covering the world’s events. On December 7, Pulitzer Prize-winning journalist Bernard Stein ’59 came back to Bronx Science as an inductee in the 80th Anniversary Hall of Fame. Stein was an editor for The Riverdale Press from 1978 through 2008 and founded The Mott Haven Herald and The Hunts Points Express, all local newspapers in the Bronx.

But before all of this, he was an editor-in-chief for our very own newspaper: The Science Survey. To him, attending Bronx Science wasn’t a conscious choice he made. “I came here because it was here!” he said. “I grew up in Riverdale, so I took the test, passed it, didn’t go to DeWitt Clinton!” Stein attended Bronx Science when it was moving from the old building on 184th street to the one we are currently in. Yes, he had to take out five library books and transport them to the new building.

As a student, Stein ran on the cross country and track teams, but his fondest memories of Bronx Science include his Journalism class, which back then was a double-period English and Social Studies class back. “The teacher was a wonderful man named Leonard Manheim and that was the best part of my high school experience. It really kindled in me a lifelong love for literature,” he reminisced. His favorite piece that he wrote for The Science Survey was an editorial about how Bronx Science shouldn’t specialize in science, but be a general school for high achievement students. It created a conversation around the school and administration, which Stein described as his, “first taste of what an editorial could achieve.”

Stein describes himself as someone who was “groomed” to become a journalist. His father founded The Riverdale Press and wished for his two sons to follow in his footsteps. But after he graduated in 1959, Stein decided to rebel and become an academic. “I wanted to become an English Professor and teach Shakespeare,” he laughed. He studied literature at Columbia University and soon “ran away from home” and worked towards his PhD at The University of California, Berkeley.

That was in the turbulent year of 1964, which is arguably the year the 60s really began. Suddenly, Stein found himself in the middle of the Free Speech Movement. Along with getting arrested in the largest mass-arrest at the time, he helped found Berkeley’s Students for a Democratic Society (SDS) chapter, and wrote The Movement, a newspaper which was affiliated with the Student Nonviolent Coordinating Committee (SNCC) in San Francisco.

After “raising hell”, Stein dropped out of Berkeley and worked on The Mark Twain Papers, an archive of everything Mark Twain ever wrote, from a laundry list to ‘Huckleberry Finn’. But his father fell ill and begged him to return to New York. He did so and became an editor for The Riverdale Press in 1978.

Under Stein, The Press won over 300 state and national awards and has been named the best weekly newspaper in New York State eight times. In 1986, Stein was named “Writer of the Year”.

Stein’s time with The Riverdale Press wasn’t controversy-free either. In 1987, The Press’s office was firebombed after Stein wrote and published an editorial regarding the right to read ‘The Satanic Verses’ by Salman Rushdie. The book was pulled from the shelves of chain bookstores after the ruler of Iran, the Ayatollah Khomeini, issued a fatwa (declaration) calling for Rushdie and anyone who enabled the publication of this blasphemous book, which questioned the founding myths of Islam, to be killed. Paperback Plus, which was the only independent bookstore in the Bronx at the time, decided to keep the book on their shelves. “I hadn’t read the book,” Stein said. “I just thought that people were entitled to make up their own minds. Ultimately, it was the reader’s decision, not the book store’s.”

The Riverdale Press was delivered every Thursday. The Tuesday after that week’s paper, Stein got a phone call at 5:30 in the morning saying that his office building was on fire. The blaze was strong enough to melt the computers on the first floor. Stein and his family received death threats for the following four weeks, leading to police guarding his house for over a month.

But that Thursday, they still published a new Press. “The firebombing made national news, so all the other news outlets came up to Riverdale to see if we’d really publish a paper that week,” Stein laughed. “The publicity was nice!”

The story Stein is proudest of publishing, however, is about a medical waste incinerator that was secretly constructed in the South Bronx. “I did some research and maybe my Science background came in handy there,” Stein laughed. “I found out about the toxins that incinerators spew and wrote an editorial about that.” After a two-year investigation, publishing expose after expose, Stein found out that all the politicians that endorsed the incinerator had been mislead by a letter from the Chair of the Community Board, which said that they unanimously agreed to support to incinerator because it would bring jobs. As it turns out, there never was a vote. The chairman of the board was being paid as a consultant by the developers of the incinerator. This led to a couple of years of intense struggle and people in the neighborhood holding a sit-in on the Bruckner Expressway and protested the incinerator. Finally, tests were done that showed what toxins were being produced by the incinerator. It exceeded the limits of a variety of toxins.

The closing of the incinerator was a moving moment for Stein. “The Press led a sort of crusade that made a huge difference,” He said. “It was out of that experience and realization that impoverished communities can’t have their own source of news because at that time it was an advertising-based economy, they didn’t have the disposable income for it. It was out of the incinerator that I got the the idea that there ought to be non-profit newspapers.”

After winning the 1998 Pulitzer Prize for Editorial Writing, Stein was offered to teach at the Integrated Media Arts Program at Hunter College in 2005. Stein only accepted the job after the school agreed to let him use students to staff a local newspaper in the South Bronx. “You tell these stories so people can know what’s going on in their own communities and can, if they choose, come together to fight or support things that are being imposed on them from the outside,” he said. He used this to open The Hunts Point Express in 2006 and The Mott Haven Herald in 2009 with students from the CUNY Graduate School of Journalism.

For those who want to pursue any career that involves writing, Stein has some simple advice. “I always told my students that you could become a good writer in two ways: by reading, and by writing. You gotta keep those muscles working and learn from how other writers write.”

Today, Stein has retired his positions at all three newspapers. He is a proud grandfather and gushed about seeing his 3-month-old grandson at the induction ceremony. He still helps out with the two South Bronx papers, but says he’s, “just been reading a lot and enjoying life.”