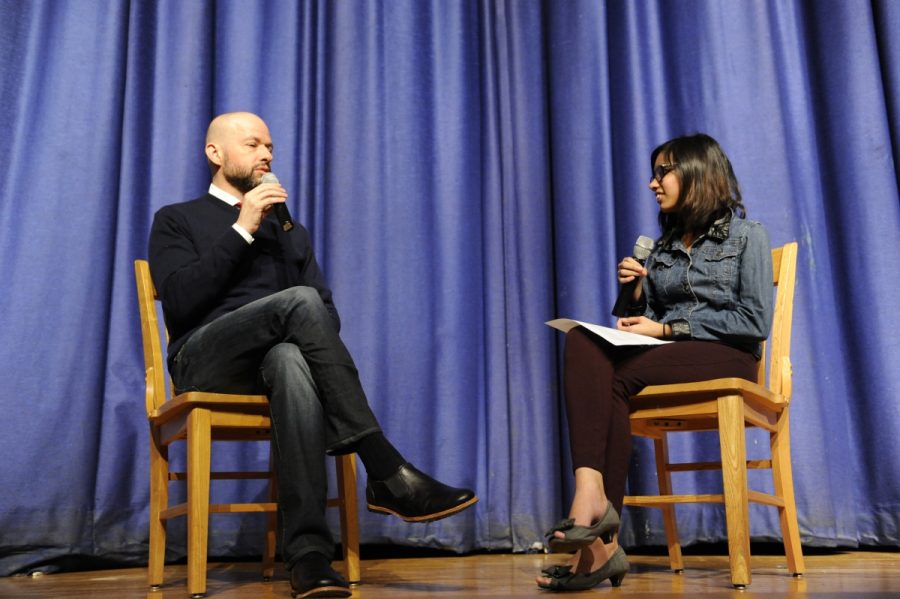 Cryer is interviewed in the auditorium by Lakhsmi Chatterjee ’18.

Now an Emmy Award-winning actor, Jon Cryer ’83 was once a Bronx Science student working to balance auditions with homework. Cryer, who is best known for his roles as Alan Harper in the CBS sitcom ‘Two and a Half Men’ and Duckie Dale in the ’80s classic ‘Pretty in Pink,’ returned to Bronx Science on December 1, 2017, as part of the school’s 80th anniversary Hall of Fame inductions. Greeted enthusiastically by both students and teachers who lined up for pictures and the chance to tell him that they’re a fan, Cryer handled it like a pro, of course, smiling for selfie after selfie, to the point that no one would know that this was the polar opposite of his true Bronx Science experience as a teenager.

During his high school years, Cryer was not one to socialize, as he did during his recent visit. “I ate lunch alone for three years – I’m not asking for pity – because it was weird, it was by choice. I don’t know why I didn’t want to be social,” Cryer said. “A lot of people experience high school and feel ostracized. I ostracized myself because I wanted to be in the arts, and everyone was very academically oriented.”

Despite knowing that he wanted to be an actor since he was twelve years old, Cryer decided to come to Bronx Science in the hopes that it would give him an advantage in college admissions. “I knew that colleges wanted well-rounded people, and I was not one at that point. So I was hoping that the atmosphere at Bronx Science would infuse me with brainiac-ness,” Cryer explained.

Unlike many of his peers, Cryer wasn’t extremely math and science-inclined. “I remember when I got my SAT score, and I was proud of it, my seat-mate right next to me going ‘Wow, how you gonna tell your mom?’ with this grave expression on his face,” he recounted.

While still in high school, Cryer made his Broadway debut as an understudy in the play ‘Brighton Beach Memoirs,’ which prevented him from attending college, as he originally planned. “I was not actually able to attend my last month of classes, because I was in rehearsals. But I won’t say that performing in a Broadway show wasn’t a little more exciting than attending my last month of classes. But I had been very college focused, then I got jobs, and I ended up getting jobs right away, and I ended up never attending college,” Cryer said.
“A lot of people experience high school and feel ostracized. I ostracized myself because I wanted to be in the arts, and everyone was very academically oriented.”
After graduating, Cryer went on to star in the 1984 movie ‘No Small Affair’ with Demi Moore, and, more notably, in the 1986 John Hughes’ movie ‘Pretty in Pink.’

Despite early success, Cryer experienced a rough patch in his career, starring in multiple shows that were canceled after only one season.

Through this, he persevered. “I have a perhaps foolish persistence, which is something that you have to be equipped with as an actor, just a willingness to take whatever setbacks happen and just ignore them. It’s just delusional to some degree, but it’s handy. And if the thing you’re aspiring to is just so great that you can’t let go of it and you’re willing to take whatever stupid things happen along the way, then you’ll be okay, because show business is not fair, there’s no set course to succeed in it, there’s no definition of success,” Cryer explained.

Cryer found success once again in 2003 when he was cast as Alan Harper opposite Charlie Sheen in ‘Two and a Half Men.’ Over twelve seasons, Cryer earned seven Emmy Award nominations and two Emmy Awards.

“When you do a comedic role for twelve years, there’s a lot of twists and turns that the writers are gonna put you through. [Alan] went through a million things on that show: near nervous breakdown, confusion about his sexual identity; there’s a couple of episodes when he thought he was gay and dated a guy, you know. That character went through a lot of things, and it was a great challenge, and that I was able to do it for twelve years is a real honor,” Cryer reflected.

Even with years of success, the show faced setbacks, most notably the exit of Sheen after the eighth season due to the actor’s public breakdown. However, Cryer managed to avoid devastation. “For actors, you know that most of the time, a long gig is six months. So knowing that, during the eighth year of ‘Two and A Half Men,’ it was like ‘well we had a good run,’ you know. I assumed it was over. I was just grateful for what I had,” he said.

This aside, the show continued on for four more seasons, with a new co-star for Cryer, Ashton Kutcher. This new era brought more success, with Cryer winning his second Emmy as Leading Actor, having previously won for Supporting Actor.

Cryer is currently working on a new CBS comedy, ‘Dads and Daughters.’ Instead of leading the show as an actor, he will play a new role as the executive producer.
Ultimately, Bronx Science students can look at Jon Cryer and realize that, it doesn’t matter if you have no one to sit with at lunch, if your standardized test scores don’t impress your classmates, or if your career prospects look bleak – success is possible.