Meet the MakerSpace Club: Turning Ideas Into a Finished Product 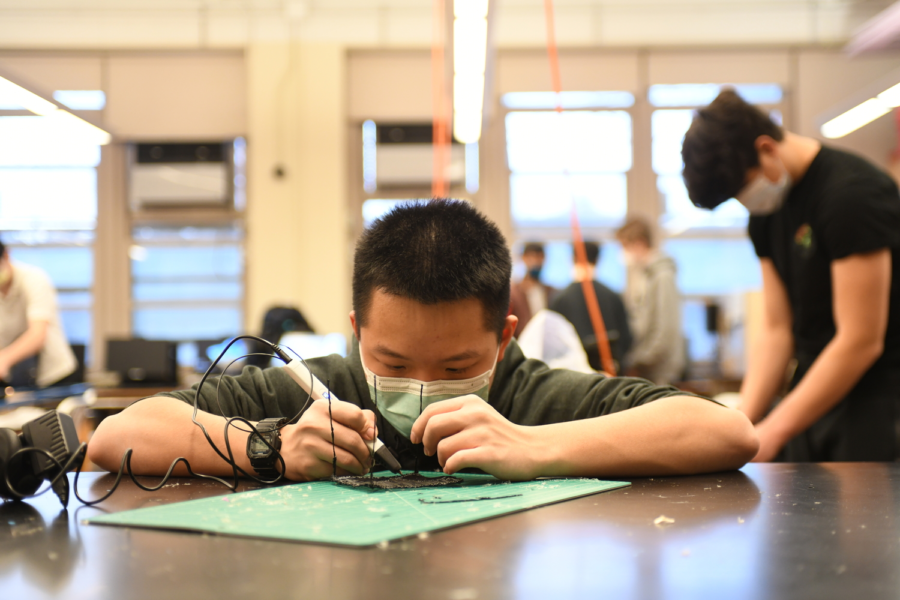 A member of the MakerSpace club works intensively on his 3D printer pen project.

On Thursday afternoons in Room 131, wood shavings and the buzz of hardware fill the air as the MakerSpace club gathers for the final meetings of the 2021-2022 school year — all in preparation for the annual club display. Clustered club members look over GoKarts and complicated CAD designs. MakerSpace president Spring Lin ’22 traverses over to club advisor Mr. Wala, and engages in a spirited conversation.

These sights and sounds characterize the MakerSpace environment as a whole — a home base for artists and engineers driven by flexibility, creativity, and innovation. At MakerSpace, Bronx Science students have the opportunity to work on diverse projects without limitation.

Many Bronx Science ninth graders are familiar with Room 131, having tackled laser cutters, 3D printers, and basic circuitry as part of the mandatory Bronx Science Elements of Engineering course. For those who felt an inkling of connection to the field, participating in the MakerSpace program has allowed them to deepen their interest beyond the classroom.

“I’ve always been really excited about working on my own projects, and the MakerSpace club has granted me the opportunity to do so and guide others in doing so with the proper financial support,” said Lin. “I love having the ability to make stuff whenever I want to. I can bring the ideas in my little tiny notebook to life, making my thoughts into solid realities that are more tangible.”

Though the MakerSpace community remains strong within Bronx Science walls, the MakerSpace club is enriched by a greater movement, a societal shift towards “maker culture.” This contemporary movement spotlights the technology-based and hardware-based aspects of the “do-it-yourself” mindset. Driven by self-sufficiency, the movement emphasizes free tinkering and experimentation, as individuals dive into independent projects.

Unlike traditional classroom or work settings, maker culture invites more informal and peer-based methods of sharing skills and ideas. Those deeply engaged in the maker movement have also set up places known as Open Source Hardware Shops, MakerSpaces, or HackerSpaces, where people have the freedom to work with materials, mentors, and space that they do not have access to already.

In fact, the rise of maker culture is closely associated with the rapid spread of these communities across the world. Some notable spaces in New York City include NYC Resistors, MakerSpace NYC, and Hack Manhattan. At Hack Manhattan, monthly dues are normally $100, but $50 for “student/starving/unemployed hackers.” If used frequently, these memberships drastically reduce the costs of equipment and maintenance for makers across the city.

“In this new world, you don’t have to go bankrupt if you fail, because you can fail small. You can innovate as a hobby. Imagine that: a nation of innovation hobbyists working to make their lives more meaningful and the world a better place. Welcome to the maker revolution,” said Mark Hatch, author of  The Maker Movement Manifesto: Rules for Innovation in the New World of Crafters, Hackers, and Tinkerers.

Twenty five to thirty people attend MakerSpace club each week. This year, club members have been working on developing electric skateboards, gliders, robotics parts, and everything in between. Students propose their projects in the beginning of the year to acquire the adequate funding and materials. The inspiration for their work ranges from classroom assignments to simple pleasures. “I decided to work on an electric skateboard because it was technically challenging, but also just because I’ve also wanted to skateboard for a while,” said Lin.

While some students may try to appeal to work on an individual project, underclassmen are mostly paired with other club members to help manage the workload.

Bronx Science’s MakerSpace requires a lot of commitment from students, as funding is specifically designated to certain projects. At the end of each club season, the MakerSpace club hosts a presentation fair to share their completed projects with the school community.