Volunteering Around the City: A Profile of Bronx Science’s Key Club 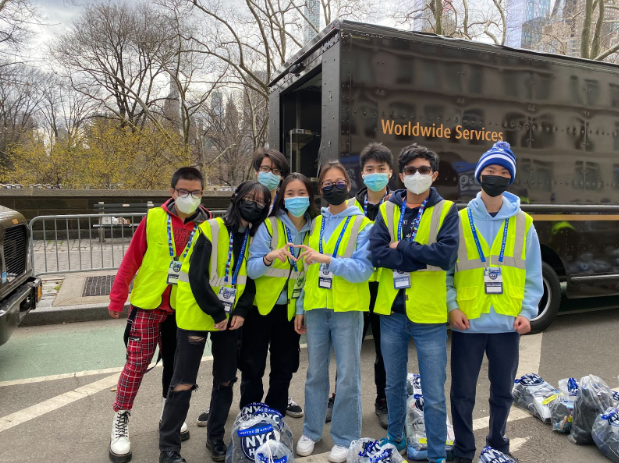 Here are some Key Club members at a New York Road Runners (NYRR) event after organizing and distributing bags to the runners.

Exploring New York City with friends, helping out marathon runners, and planting flowers are just a few of the countless activities that Key Club members participate in throughout the year. Founded in 1977, Bronx Science’s Key Club brings together students of all grades who share a similar passion for community service and leadership.

One of the many ways Key Club promotes community between its members is through K-families. K-families place 5-7 students from all grades into one group. Members can then attend events with their K-family, whom they may form long lasting friendships with over time.

“After leading a K-Family, I have to say it’s a rewarding experience knowing that you’ve fostered a sense of community and family between people who were once strangers,” said Mandy Lim ’23, the current Vice President of Key Club. “It gives me a sense of pride knowing that I’ve helped someone expand their circle in the same way Key Club helped me expand mine.”

Some of the most popular fundraisers members participate in with their K-family are the New York State of Mind (NYSoM) events. These events happen near holidays including Halloween, Thanksgiving, Hanukkah, Christmas and Easter. Activities at these events range from managing haunted houses to setting up Easter egg hunts.

“Watching my friends put on costumes, decorate rooms, and run interesting and fun stations for the neighborhood toddlers and elementary school kids has always led to some of the cutest and funniest interactions ever,” said President Shiya Lin ’23, “I think that NYSoM events are a great introduction to how volunteering can not just be rewarding, but also incredibly fun as well.”

“I was able to plan this event, and something that was enjoyable from this fundraiser was meeting the executive board of Brooklyn Tech. This fundraiser marked the beginning of my friendship with some of them,” said member Linh Luu ’23.

Along with long lasting friendships, Key Club members also gain a greater understanding of other cultures after attending cultural events. During the Lunar New Year Parade and Festival, hosted by Better Chinatown, participants helped with stage assembly, dressed up as mascots, and marched with dragons. In May 2022, many members attended the Japan Day event in Central Park and Japan Fes in the Upper West Side, two festivals that celebrate Japanese culture, art, tradition, and food.

Key club offers a wide range of leadership positions for its members. There are six committees in the club with two co-heads each, as well as president, vice president, secretary, treasurer, and bulletin editor.

One of these committees is the Public Relations committee, which is responsible for compiling a set of petitions each month for members to sign. These petition sets appear in each weekly Key Club email, which allows for members to easily access and sign petitions regarding the topics that they are passionate about. “I enjoy providing these sets for our members because these collections help spread awareness for various topics often talked less about,” said Public Relations Co-head Sumaya Suma ’24.

Some leadership positions within Key Club extend beyond Bronx Science, such as that of Lieutenant Governor (LTG). Abigail Choi ’24, this service year’s LTG, oversees all of the Key Clubs in the Bronx and Manhattan.

“Each club in our division is different – some are much larger than others, with a strong foundation of connections and advisors, while others are just starting to develop. Despite these differences, Division 11 is a team – a family – and my favorite part of my role is facilitating the weaving of this diverse community,” said Choi.
“After leading a K-Family, I have to say it’s a rewarding experience knowing that you’ve fostered a sense of community and family between people who were once strangers,” said Mandy Lim ’23, the current Vice President of Key Club. “It gives me a sense of pride knowing that I’ve helped someone expand their circle in the same way Key Club helped me expand mine.”