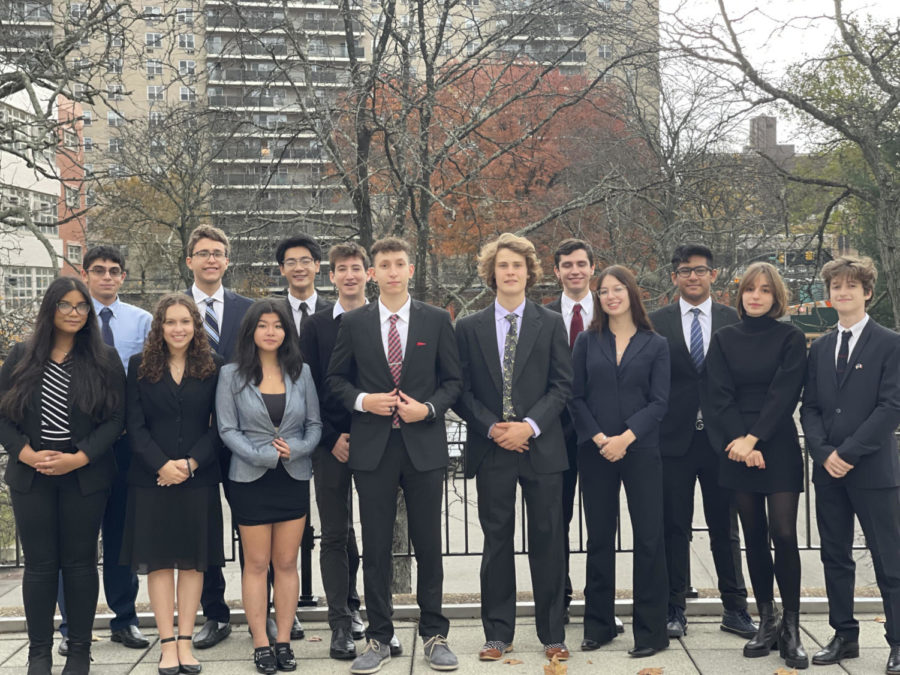 Pictured is the Model UN Board as they prepare to host SCIMUNC in December 2021. “Model UN isn’t just about giving speeches; it’s about giving the next generation a voice, and it’s a voice they can use in debate or just talking with their friends. I think that’s the most important part,” said Omar Darwish ’22, the Secretary General of SciMUN.

After a year of online learning during the 2020-2021 academic year, Bronx Science’s Model UN team has seen overwhelming success during the 2021-2022 in-person season. In addition to hosting their own conference, SCIMUNC, and winning numerous awards at each conference, the team has been able to prosper greatly with the switch to completely in-person learning starting in September 2021.

“In person, it is much easier to learn and teach MUN, practice live speeches, and feel the great atmosphere,” said Matthieu Choueiri ’23, the General Assembly Assist of the team.

During the weekend of November 7th, 2021, the team competed at the first conferences of the season. Varsity members virtually competed at Brown University, William and Mary, and Vanderbilt University, while novice members competed virtually at Phillips Exeter Academy. Together they brought back seven Best Delegate awards, eight Outstanding Delegate awards, and seven Verbal Commendations, as well as winning a school award for Outstanding Large Delegation at Vanderbilt, marking a strong start to the season.

At the end of January 2022, the team set a record at the American University Model UN Conference, winning 16 individual awards and the Best Large Delegation Award. This was the team’s third “Best Delegation” title this season.

Over the weekend of February 5th, 2022, the team competed at the University of Chicago. Despite having only a few days to prepare, Bronx Science’s delegates delivered a fantastic performance, earning four 1st place awards, four 2nd place awards, and three 3rd place awards.

“What’s made us so successful this year has to be the training. Week in and week out we always commit to the meetings. Everyone must show up; when it’s a Tuesday you know it’s a MUN-day,” said Secretary General Omar Darwish ’22. Darwish is essentially the captain of the team; he plans meetings, sets up conferences, picks team rosters, and plans the annual conference SCIMUNC.

At practices, members of the leadership team lead small groups of two or three, where novices are paired with varsity members. They receive a prompt and a position; topics range from the Russian-Ukrainian war to the Kim Kardashian versus Kanye West internet feud. Each member has a few minutes to research, and then they present their speech to the group. The other members of the group give the speaker feedback, so everyone works on their public speaking skills with one another. “We train members so that they’re thinking on their feet and they know exactly what to say in any sort of tense situation, since in committee when there’s speech after speech, there’s almost no time to plan out what you’re going to say,” explained Darwish.

The committees are the two different manners of competition in Model UN; there’s General Assembly (GA), which is where novices begin, and Crisis. “The General Assembly is basically about diplomatic negotiations, while the Crisis is very hands-on and deals in diverse actions,” said Darwish. Committees can be about any topic relating to politics or international relations, and delegates play different roles and hold different powers.

“In committee you’re always trying to think of new ideas and new ways to approach the same problem. You can try to go the normal political route by overthrowing some government and instilling world peace, but you can also buy newspapers, publish articles, gain support, and start a movement of people instead of revolution,” said Darwish. MUN delegates must be capable of thinking outside the box to be successful. “I don’t think people realize how creative MUN delegates have to be. Imagination is necessary for coming up with solutions to global issues,” said Lucia Dec-Prat ’23, the Crisis Assistant Director.

The goal is to grab the attention of the committee chairs, who judge the conferences. “MUN is about commanding the room. It’s about being focused, negotiating, and being the leader. That’s why we’ve been gaining so much success this year – everyone on the team understands that,” said Darwish.

Alongside coaching, a successful team isn’t possible without a positive environment. This season’s leaders have worked hard to ensure that practices aren’t only instructive, but also fun and have a supportive atmosphere. “In-person MUN has improved my public speaking skills, as well as my ability to interact with fellow MUN members in a decorous way,” said Nora Auburn ’24, the Deputy under Secretary. Through the demanding practices and conferences, many members of the Model UN team walk away with life lessons greater than the domain of Model UN. “Through MUN, I learned how to assert myself as a woman in male-dominated spaces,” said Samantha Mayol ’22. Dec-Prat added, “SciMUN has pushed me out of my comfort zone and taught me about flexibility and communication.”

In addition to the Model UN extra curricular activity, Bronx Science offers the AP Human Geography course, taught by the SciMUN director Ms. Steiker. The class is run as a simulation of Model UN and concentrates on learning the necessary skills to be successful in Model UN, while also studying international relations and geopolitics. Debate is central to the class, as it truly prepares students for success in the realm of politics, international relations, and government.

After last year’s completely online version of the team, SciMUNers are grateful to be off Zoom and with each other again, even if only for practices. Conferences are still being held virtually. Although this is disappointing to some members of Model UN, it also has its upsides. Online conferences allow delegates from all over the country to come together and learn from each other. “Last year, although it was convenient to be able to have safari handy at all times, the MUN experience definitely was not as engaging and instructive,” said Choueiri. As Spring begins, the team is looking forward to more in-person conferences.

While the SciMUN team has always been a successful part of our school community, this year’s members and leaders are especially noteworthy. Rarely has a team been so successful while also fostering such a supportive environment, especially given that it is almost completely student-run. Inside and outside of the classroom, MUNers are ready to face an ever increasingly complicated world with grace and charisma. “Model UN is more than just debating global issues; it teaches delegates to be brave, to speak with power and complexity, and to think critically about issues beyond the domain of  Model UN,” said David Lin ’22.
“I don’t think people realize how creative MUN delegates have to be. Imagination is necessary for coming up with solutions to global issues,” said Lucia Dec-Prat ’23, the Crisis Assistant Director.