The Latest Updates on the Bronx Science Student Diversity Committee

The Student Diversity Committee, run entirely virtual since its founding, has begun in-person meetings during the 2021-2022 academic year, which has offered both new opportunities for growth and newfound difficulties in scheduling. 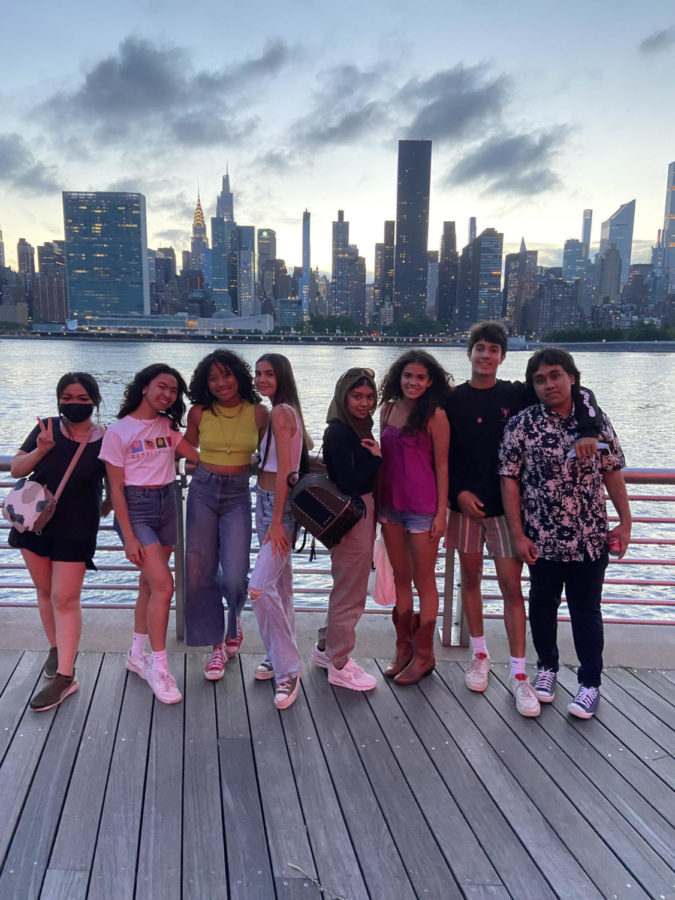 Pictured here are the Student Diversity Committee members during their organized summer picnic.

Diana Campbell ’22, Mamadou Barry ’22, Kael Carcamo ’23, and Eldisa Rosario ’22 started the Student Diversity Committee (SDC) at Bronx Science in June 2020 in order to support the black community at the school in wake of the George Floyd murder and subsequent protests. Their original intention was to create a space for Black students at the school, but the conversation eventually expanded to include all of the students at Bronx Science, the majority of whom are people of color. The SDC works to expand and implement social justice at the school, contributing to a more racially inclusive environment at Bronx Science.

Because the SDC was established during the height of the Coronavirus pandemic, much of the organization’s events have been virtual. They held webinars with guest speakers and activists such as Jane Elliot, Lawrence Raysor, and Dr. Yolanda Sealey-Ruiz, where they aimed to heighten the Bronx Science community’s knowledge of racism. They also held an Instagram Live series called ‘The Elephant in the Room’ in which they invited Bronx Science students to discuss their own experiences with and views regarding racial injustice. More about the SDC’s work in 2020 can be found here.

“Our in-person meetings allow us to socialize and to empathize with one another on a personal level,” said Manruchi Padda ’22. “Unlike on Zoom, we are able to actively join discussions, share thoughts and ideas faster, and expand our diversity of thought.” Despite these opportunities offered through in-person meetings, the sudden transition has also posed its own challenges. Diana Campbell ’22 described how organizing SDC meetings around the committee’s 30+ members’ in person schedules has been difficult. “At times, it is frustrating, because you will almost never find a time that works for everybody,” she said. “We have adapted to this by working in smaller groups made up of people with similar schedules, and in some ways this has worked better for us, because the same people can continue to work together on a project made from their collective vision.”

Presentations for ninth-grade advisory have been one of the many initiatives that the SDC has accomplished this year. Taking inspiration from the Bronx Science Sexual Assault Prevention Board, which also does presentations for advisory sessions, they created a slideshow centering around equity and racial slurs.

“We tried to put ourselves in the shoes of our audience, as is so often necessary in the work of changing and maintaining the culture of a community,” Campbell said. “For us, that meant thinking, ‘What did I need to hear as a ninth grader?’ I think that ninth graders in general understand the implications of equity without necessarily using that name for it.”

In order to start the conversation with something that the ninth graders could easily relate to, the presenters asked students about their daily commute and how it affected their experience at Bronx Science. “We wanted to explain in these presentations that these seemingly arbitrary aspects of our identity — where we live, what transportation we have access to — things that we have no control over, can have these profound effects on the way that we are able to engage in the Bronx Science community,” said Campbell. Using the ninth graders’ new understanding of the role of equity in their lives as students, the presenters then applied the same method to segue into the more difficult application of avoiding the use of racial slurs in schools entirely. The SDC plans on doing similar activities as they create and share these presentations with the other grades as well.

The SDC is working on many different projects for the future. They will soon be launching a newsletter, which Campbell says will include student perspectives on current events, as well as art and writing centered around the themes of diversity and inclusion. They plan on opening submissions for the art and writing section to students very soon. In addition, they hope to continue hosting new guest speakers to talk to the Bronx Science community about issues related to race, diversity, and equity. Make sure to be on the lookout for these announcements and follow their Instagram account, where they recently highlighted influential black figures for Black History Month during February 2022.
“Our in-person meetings allow us to socialize and empathize with one another on a personal level,” said Manruchi Padda ’22. “Unlike on Zoom, we are able to actively join discussions, share thoughts and ideas faster, and expand our diversity of thought.”