Legal Society gives students the opportunity to learn more about various facets of the law. 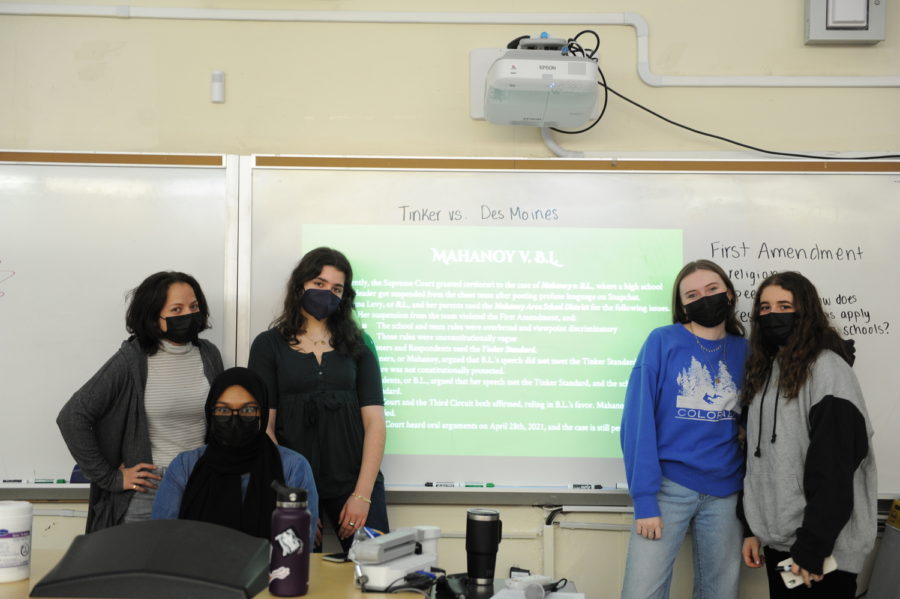 "Learning about the legal field is really important, I think, especially now, because it's important to address the progress or even the lack of progress we made over the years. It really shows how law affects everyone and doesn't just exist in a courtroom," said Ava Conner '24. (Pictured from left to right: Ms. Erika Rubio, Saziea Biva '24, Esther Gelman '24, Ava Conner '24, and Marina Gallo '24)

As I made my way through the club fair, I saw dozens of signs advertising different clubs.  One was for ‘Pre-Medical Society,’ another for ‘Journal of Medicine,’ and yet another for ‘Youth in Dentistry.’

It wasn’t until I walked towards the other end of the courtyard that I saw the sign for ‘Legal Society’ neatly taped to the bench.

The board members and founders of the club, Charlotte Zhou ’24, Ava Conner ’24, and Marina Gallo ’24 are all eager to share their passion for the law with other students at Bronx Science.

I immediately filled out their sign-up sheet and waited with anticipation to attend their first meeting. I have been attending ever since.

Club President Charlotte Zhou ’24 said, “When I began my first year at Bronx Science, I really liked law, but there wasn’t a law club for me to join. So, Ava, Marina, and I decided to create the club around March of 2021.”

Throughout the year, the board divides up their meetings into specific units of study, such as constitutional law, criminal law, and civil rights. These units help expose the members to many aspects of law they may have previously not thought about. Learning about different legal practices allows students to understand just how large of an impact that law has upon their daily lives.

For instance, Jonathan Lin ’24, a club member since March 2021, said, “It’s a unique club, in that what we learn about law can be applied to the past and to historical events. Also, law has a major impact on today’s world.”

The units of study allow for members to gain a more in-depth knowledge of the legal field. Within each unit, the meetings are often broken up into many activities such as direct and cross-examination that mimic the dynamics of a courtroom, and case studies.

Prior to their meetings, the board members will usually also send out an email asking their members what they want to cover during that week’s meeting. Members are usually given the option between whether or not they want to work on legal drills, or go over case studies. They also give feedback on what court cases the members want to learn more about.

During their constitutional law unit, they went over Korematsu versus the United States, a case challenging the United States decision to put Japanese Americans in internment camps during World War II.

Maisha Fahmida ’24 said, “My favorite part of the club is when we take a club vote about whether or not we agree with the judges and why, because it makes you really understand the case and consider every piece of information.”

For drills, there are two main parts: direct examinations and cross-examination.

During the direct examination, the attorney asks the witness open-ended questions where the answers can not be yes or no. This helps the attorney to create a narrative in order to help their side of the case. Throughout the questioning process, the witness cannot speculate or speak for too long. If the attorney violates either one of the rules, the other attorney is allowed to object.

These objections are either sustained or overruled. If overruled, the attorneys must come up with a different line of questioning in order to win the case.

On teams such as Mock Trial, the teams get an assigned case that they have to argue for or against beforehand. In Legal Society, the details are mostly left up to the students themselves, a notable difference. The board members hand slips of paper to the members that state an issue, in order to create a basic case.

Esther Gelman ’24, the club’s Events Coordinator said, “Mock Trial and Moot Court do drills as well, but their drills are more serious. Legal Society is more laid back, so there is less pressure when doing drills, making it a lot more fun.”

The drills allow the members to interact with each other and with the board members, creating a lively environment.

“My best memory in the club is definitely doing drills in person this year. Last year, even though it was fun to discuss ideas over Zoom, in person, it is a lot more interactive. Since the members get to decide what direction the cases go, we’ve gotten a few laughs out of what they decide to say,” said the club secretary, Ava Conner ’24.

The board members are also known for bringing in many guest speakers such as NYU professors Dr. Barton Beebe and Daryl Levinson who teach Intellectual Property and Constitutional Law, respectively, as well as Lisa Blatt, who has won 37 Supreme Court cases out of 42, more than any other woman.

Marina Gallo ’24, the Vice President said, “An important part of our club is connecting and outreaching, networking with lawyers and learning about what they do and what the field of law is like. We also enjoy just hearing about their experiences.”

When guest speakers visit the club via Zoom, the guest speakers usually introduce themselves and their work, as well as how they became interested in law. Then, the club members are given time to ask the guest speaker questions about their field. This gives students the chance to better understand what life as a lawyer might look like, and if they want to do something in law in the future.

“I always like to ask what the deciding factor for them was and how they knew they wanted to become a lawyer. I have been surprised so many times because turns out many of them didn’t know until they were in college. In fact, when Daryl Levinson spoke to us, he was surprised that we knew we were interested in law at such an early age,” said the club’s treasurer, Saziea Biva ’24.

Levinson also explained to the club how, unlike as in many STEM fields, going to law school has a fewer rigid prerequisites.

Biva also said, “Talking with our guest speakers is so interesting because I didn’t know I could major in something like physics, then decide that I want to go to law school, and still get in without taking any pre-requisite courses by taking the Law School Admission Test (LSAT).”

The Legal Society gives students the opportunity to learn more about the nuances of the legal field. The Legal Society club’s students who are interested in the law have the opportunity to connect with each other as well as professionals in the field. Members learn more about practicing law as well as teaching law, helping them even consider if they might want to do something in the field of law in their future.

The board members present a holistic view of law and show just how prominent law is in our daily lives, making the club both interesting and fun.
Jonathan Lin ’24, a club member since March 2021, said, “It’s a unique club, in that what we learn about law can be applied to the past and to historical events. Also, law has a major impact on today’s world.”