From hamsters to hissing cockroaches, Bronx Science’s Animal Squad has it all. 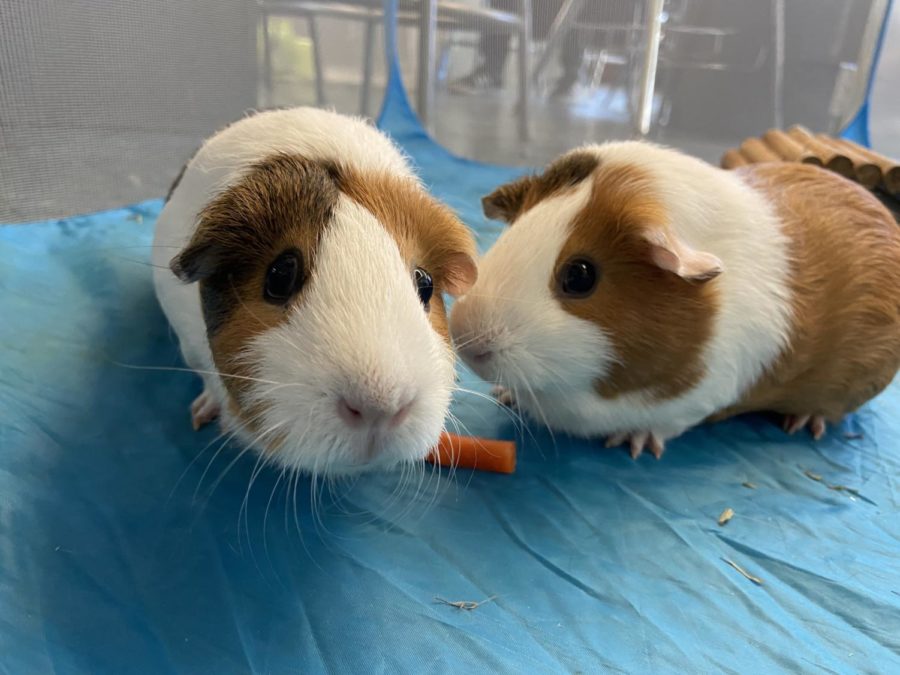 Here, Wilma and BamBam enjoy a carrot. Carrots are high in sugar, so guinea pigs can only be fed carrots twice a day.

After students finish their classes, many go home and call it a day, but a few others decide to relieve their stress by taking care of animals.

They attend an after school program called “Animal Squad.” Animal Squad is a program that takes place after school on Tuesdays at 11th period and Fridays at 10th period in room 333 and is held by Dr. Emily Schmidt, who teaches AP Biology, Junior and Senior Biology, and Animal Behavior Research.

Dr. Schmidt became the supervisor of Animal Squad when the old supervisor, Mr. Wren retired. She and Mr. Wren were co-supervisors, and Dr. Schmidt felt like it was her duty to take over since she was already the Animal Behavior teacher and has a Ph.D. in studying animal behavior.

Animal Squad is a place where students take care of and occasionally play with the animals that we have at Bronx Science. Currently, these animals include a dwarf hamster, named Dandruff; two chinchillas, a white one named Lily, and a gray one named Violet; a large number of hissing roaches, and 9 unnamed paradise fish. She also has four guinea pigs, a mom, Wilma, which has been in Dr. Schmidt’s care since November of 2019, and three of Wilma’s babies, who were born in the following January 2020, Pebbles, BamBam and Dino. Recently, Dr. Schmidt adopted three female rats, named Jack, Archimedes, and Chopsticks.

In years past, Dr. Schmidt also had other animals in her possession, such as the father of the three guinea pigs, named Fred, a Blue-Tongued Skink named Albert, and a Cockatiel named Chicken, who found a new home with foster parents. She is also hoping to have more animals under her care, such as more hamsters.

As for joining Animal Squad, signups are not necessary, and “Anyone can join, although right now we have relatively few animals, so we don’t need as many people” said Dr. Schmidt. However, everyone is free to stop by and say hello to the animals or to make new friends. In fact, many of the Animal Squad’s frequent members have made good friends through Animal Squad. “I met and hung out with some of my best friends there, and we got to see each other for longer. I would definitely recommend this to others, especially if they want to meet all the cool animals that we have at Animal Squad,” said Audrey Yong ’24, a regular member of Animal Squad.

Animal Squad is also a way for students to receive community service hours while having fun, so you should come to visit!
Animal Squad is a place where students take care of and occasionally play with the animals that we have at Bronx Science.