Science Olympiad: From Virtual to In Person

Science Olympiad, a team which had been fully remote last year, is now in-person, allowing members to fully experience the team and what it has to offer. 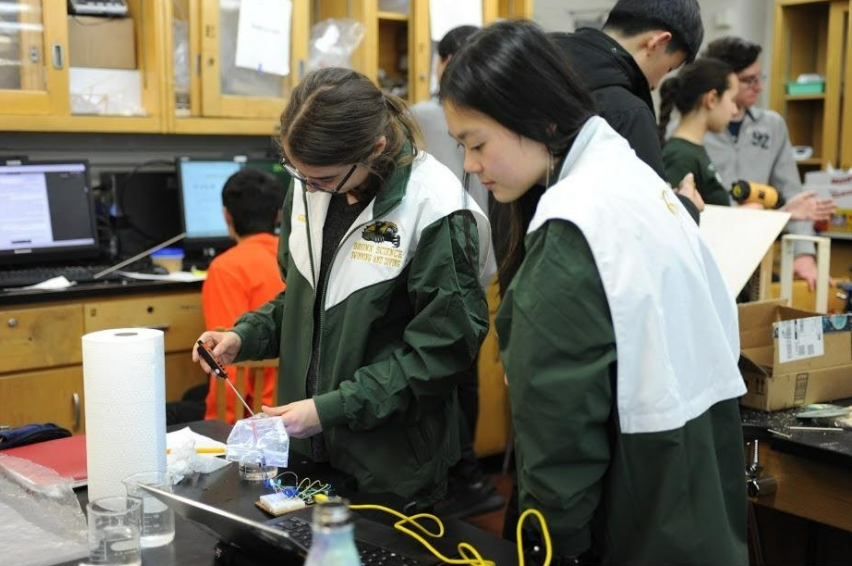 Members of Science Olympiad collaborate with partners in their events in order to design and build projects (pictured are students working together pre-pandemic).

Ornithology, Trajectory, Detector Building, and Bridges are not common courses offered by high schools in New York. However, these courses and others that are outside the school curriculum are offered by the Science Olympiad team. Science Olympiad is a student-led academic team at Bronx Science, focused on exploring subjects such as biology, earth science, chemistry, physics, math, and engineering, going beyond what is taught by the normal school curriculum. The team aims to help students discover their interests and prepare them for annual competitions.

Last year, Science Olympiad was entirely virtual due to the COVID-19 pandemic. This presented a number of challenges for both the board and its members. The States competition, a qualification tournament for Nationals, was canceled in March 2021, along with Build Events, which are events where members design, create, and test a specific device or object. Despite these difficulties, the team was able to take advantage of the opportunities provided by a completely virtual format. The co-captain of Science Olympiad, Gemma Greene ’22 said, “At first, we weren’t sure how competitions would take place, and as we got more information, we worked towards taking advantage of the opportunities that remote invitationals provided. We didn’t have to worry about transportation or hotel costs, and we were able to compete at five invitationals in addition to Regionals and States.”

The transition to a virtual format was difficult, but after overcoming many obstacles, the team had a very successful competition season during the 2020-2021 academic year. The Science Olympiad team competed in five invitational competitions, as well as the New York City North Regionals and the State Tournament. They placed 7th and received a trophy at the North Pocono Invitational, championed the New York City North Regionals for the first time, and finished 11th place at the New York State competition. The team also won 49 medals, including 18 medals from top national invitationals. Since then, the team has grown to over 200 members.

During this academic year 2021-2022, the team follows a hybrid schedule, where certain events are held in person and others online. While some students prefer participating in their events in person, others feel that virtual events are more accommodating to their schedules. “The events I take all occur around 7 p.m., allowing me to participate in more after-school extracurriculars in-person. Traveling is also easier, because as daytime hours get shorter during the winter, it often gets dark pretty quickly, and it’s easier to travel during daylight,” said Suri Lin ’24, who favors virtual events.

On the other hand, some members find virtual Science Olympiad to be less engaging, and thus prefer in-person events. Bhaskar Chakrabarti ’22, one of the current build directors, believes that Science Olympiad going virtual made it difficult for the team to hone the skills that make it such a special and successful team.

“The first event that I ever remember in Science Olympiad was ‘Sounds of Music,’ where we had to create a musical instrument and learn about the physics of sound and music. It was my introduction to all that Science Olympiad could be, fostering a creatively thinking, analytical, and collaborative bunch of scholars, who used their knowledge and interests throughout academic disciplines in order to build a device together. In a virtual environment on Zoom, none of this could occur, and it was difficult to interact or to determine participants’ understanding of material last year; in terms of building last year, all that we could do was to design and prepare for when we returned in person this year,” said Chakrabarti.

There have been both advantages and disadvantages to the virtual environment in which this team has worked in, but overall the  bonds have strengthened between the team members during the pandemic, whether or not they met virtually or in person, and this close collaboration has only contributed to the team’s continual improvement and overall success.

As the current 2021-2022 academic year progresses, the Science Olympiad team continues to work together to prepare for upcoming competitions, including a Satellite competition in February and March 2022.
“It was my introduction to all that Science Olympiad could be, fostering a creatively thinking, analytical, and collaborative bunch of scholars, who used their knowledge and interests throughout academic disciplines in order to build a device together,” said Bhaskar Chakrabarti ’22.