The club that was created alongside Bronx Science itself in 1938 is still up and running. 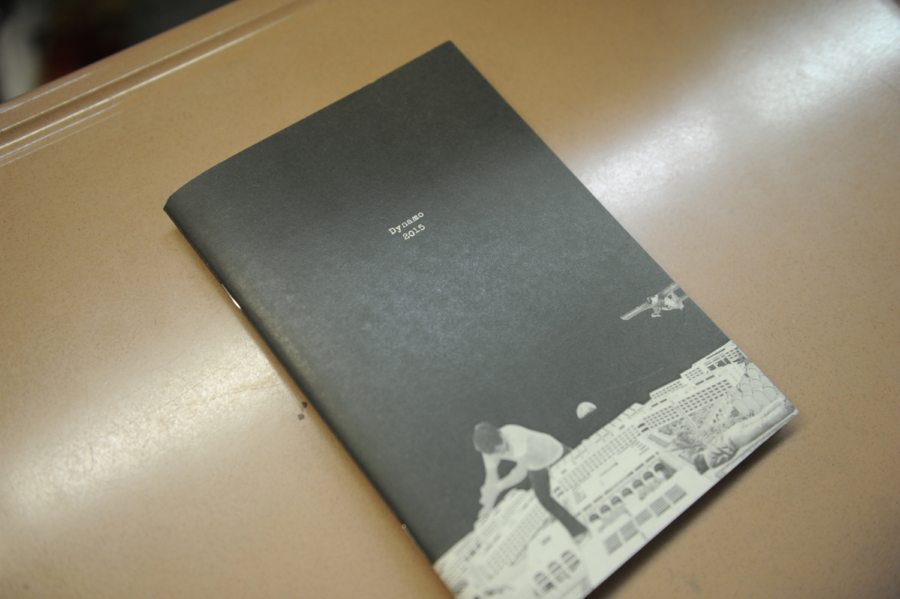 Here is the beloved 2015 edition of Dynamo, a favorite amongst current editors for its sleek design, snazzy typewriter font, and inventive collage style. It can be found with other older copies of Dynamo in Room 207 for students to check out.

“I’ll count up, I’ll count down, I’ll count in the middle.” If you’ve ever been to a Dynamo meeting, you’ve heard these magic words. Every Wednesday for many years running, Dynamo has met up to read poetry, to look at photographs, to eat clementines, to drink Yoo-hoo’s, and to have a good time. The literary magazine itself dates back to 1938, the year that our school was founded, and it has been continuously published ever since.

“What is Dynamo? …We have a literary magazine?”

This is a line that you might hear in the hallways from time to time, but yes, the rumors are true. Bronx Science does in fact have a literary magazine, separate from the school’s newspaper The Science Survey and yearbook, The Observatory. There are no grade requirements or trial runs, and students do not have to be a part of the journalism class in order to attend. It is geared towards creative writing, so students have artistic freedom to create and submit their hearts’ desire.

In terms of submissions, Dynamo is composed primarily of poetry, short stories, photographs, and the occasional hand-made drawing. During each meeting, there are weekly votes on what to include.

That’s right! Democracy reigns supreme in the weekly club meetings. After viewing a submission, there is an open discussion with everyone in attendance at the meeting, an open floor for all opinions, thoughts, and constructive criticisms. Sometimes this can even develop into an animated debate with opposing sides trying to persuade people who are undecided to vote on a piece that they believe is just exceptional.

Dynamo tends to feel like an over the top production, with the best word used to describe the club and its members being eccentric, in the best way possible, of course.

But don’t just take it from me. Several years ago, Dynamo faculty advisor Ms. Jaitin requested to be the advisor for Dynamo and over the subsequent years, her love for Dynamo has grown and continues to blossom.

If you’re a senior taking English, you may have been graced to have her as a teacher. For those who have not, she’s a self proclaimed poetry lover, and has been one ever since she was in high school, having worked on her own school’s literary magazine and newspaper.

Ms. Jaitin said, “I really enjoy being faculty advisor to Dynamo, and so did Mr. O’Grady (the previous advisor). Dynamo is different from any other club that I have run. It’s more interesting because there’s true love here.” Jaitin continued, saying that if she had to give an elevator pitch to recruit you for Dynamo, she would give the following simple and classic statement. She asked, “Do you want to talk about great poems and art with other people who are interested in the same things?”

Aside from Ms. Jaitin, the Dynamo editors have their own love and personal connection to Dynamo.

The current senior editors are myself (Chanel Richardson ’22), Allie Smithie ’22 and Maggie Schneider ’22.

Faithfully attending Dynamo just about every Wednesday since our ninth grade year led us to where we are now.

Schneider and Smithie both had a lot to say about their experiences.

In an interview with Maggie Schneider, here is what she had to say:

“How does it feel to be a Senior Editor for Dynamo?”

“My favorite part of being an editor is probably having access to the Dynamo g-mail account. It’s a crazy treasure-trove of Dynamo-related information. There are e-mails from 2009 that say “sent from my Verizon blackberry,” and I love reading them. There are all these inspirational messages from previous editors saying how much the magazine meant to them.”

Schneider is the editor who sends out the weekly emails, making each one more fun than the last. And especially after seeing her love and admiration for Dynamo, Allie and I have both agreed that we couldn’t choose a better person to oversee the g-mail account.

What has been your favorite submission and if not a particular one you’re favorite issue?

“My favorite submission was probably Allie Smithie’s poem, Ode to Our Youth, from last year. I remember that we spent close to the whole meeting analyzing it, looking up references and tying the whole thing together. It was beautiful because it was so gruesome; the poem had all this crazy imagery that I really liked.”

This was such a fun meeting because everybody chimed in! I really enjoyed the poem and am always left feeling amazed after seeing that Allie wrote such an exceptional piece.

If you could change one thing about Dynamo, what would it be?

“If I had to change one thing about Dynamo, it would be the number of people who raise their hands to speak. During my sophomore year, I remember everyone shouting out thoughts and interpretations and references they saw. I want everyone to feel comfortable just saying whatever pops into their head in the moment and to just really be honest. That’s what distinguishes Dynamo from an ordinary English class.”

I couldn’t agree more!!! What makes Dynamo Dynamo are the people at every meeting. Hearing new ideas or finding new ways to interpret works that I could have never thought are just some of the best things about Dynamo. Learning and growing from other writers is an aspect of Dynamo for which I will continue to be thankful.

Do you think Dynamo will be left in good hands after you graduate in June 2022?

“I think Dynamo will be left in great hands! The underclassmen who are coming to our meetings are all super smart and contribute so much to our discussions. I really hope that future editors continue campaigning for people to submit and keep Dynamo as the institution that it is.”

Submit! Submit! Submit! Dynamo has been created by the people for the people and that is what keeps it alive and running. And we, the editors, hope that we can see you at the next meeting.
“Do you want to talk about great poems and art with other people who are interested in the same things?” asked Ms. Jaitin, faculty advisor to Dynamo.