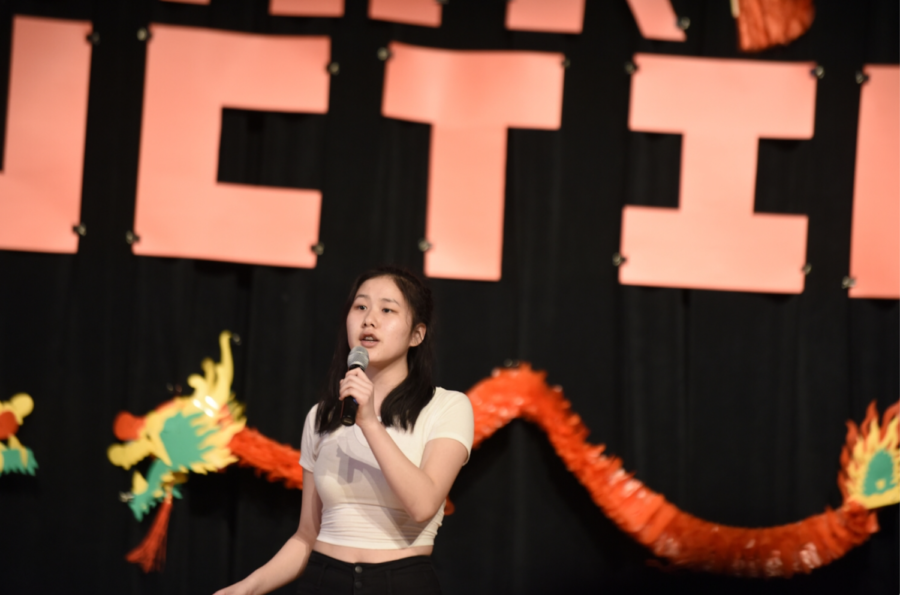 Here I am singing 'Eyes Nose Lips' by TaeYang during my ninth grade year at Bronx Science during the annual Lunar New Year Productions performance in the auditorium.

Lunar New Year is the most important celebration observed in East Asian countries. This year, the festival falls on Tuesday, February 1st, 2022, in accordance with the lunar calendar traditional to China, South Korea, and Vietnam. Signaling the beginning of a new year, it is a blissful day anticipated by its celebrants.

During the Club Fair each year at Bronx Science, students navigate the courtyard in hopes of finding an extracurricular to their liking. I was first introduced to the Lunar New Year Productions Club during the club fair of my ninth grade year.

Surrounding me was an ocean of gargantuan banners and posters marked in varying colors, ranging from electric shock yellow to charcoal black. Each of them campaigned for their respective clubs, but to be honest, I didn’t care for any of them. My stomach was bothering me after eating a chicken burrito, and all I could think about was getting home.

It was then when I heard the blast of music.

Whether it was due to my lack of artistry or my ignorance in music genres, the song that was played was unlike any other I have heard. There was a certain cadence to it, melodic yet distinctive, with notes that seemed to vibrate up and down in a constant motion.

I slowly walked towards the music, and upon arrival, a huge crowd had already formed. Standing on my toes, I craned my neck to see what all the commotion was about.

There were two students, clad in flowing wisps of white silk gowns. Both girls held a fan in each hand. A third girl stood behind them, holding a microphone. She began to sing. The two dancers moved, and the story commenced.

At first, the pair were slow and deliberate with their movements. Together, they leaned one leg out, similar to a lunge, and waved their fan, forming the shape of a butterfly. The singer’s tone was steady and measured, like a string that has yet to be plucked. However, as her voice grew louder, and the octave went higher, the two dancers left their formation and began to twirl rapidly, becoming a blur of white silk.

I focused on the singer. Her voice was raw and thrilling, seeming to express a story that I could understand despite our language barriers.

Time came to a stop. As I watched, mesmerized, I couldn’t help but think that this was a scene from a fairytale, a dream beyond all unimaginable things. I wanted to relive the moment once more. But this time, I wanted to be a part of this moment.

Three years have passed since then. Every Wednesday, we meet up after school in order to practice. At the start of each year, students select an East Asian song to perform. Dancers form their groups, and singers form their duos. There are a variety of art forms such as traditional fan dance, modern dance, singing, Chinese yo-yo, and umbrella dance. As the weeks progress, we practice for the final performance at the end of the school year.

During the first few meetings, my heart had fluttered with a mixture of nervousness and anticipation. I always liked to sing but only alone while taking a shower, where the steam and the heavy water would obscure my voice.

Before I knew it, the president of Lunar stood on the table, silencing everyone. I remember one sentence that still echoes my mind to this day: “Join our family, and we will perform together.” The students in the lunchroom burst into applause.  Even as a new member, I had felt the elated joy and the members brimming with excitement.

During every meeting, my duet partner, Kristina, and I, would travel around the lunchroom to watch the other groups practice. It was a beautiful thing to see and feel the excitement and passion that comes with doing what you love. Each group’s routine and choreography was a unique, separate performance.

My favorite genre to watch is the ribbon dance. The girls’ ribbons remind me of the ones that my grandmother had gotten me from Seoul, South Korea. Pink and dainty, they were long, trailing slivers of silk that were meant to be clipped onto the scalp, weaving seamlessly into the hair strands. Watching the enlarged replicas of my grandmother’s hair ribbons twirling and twisting delicately in the air allowed me to reminisce about my home country and the endless artistic beauty that sweeps its land and culture.

Once practice is over, everyone is sticky with sweat and tired from the adrenaline and excitement that occurs after any performance. Despite the arguably gross body odor, we hugged and high-fived each other as we went home.

The days leading up to the final performance are always the most hectic. We felt tense and uptight knowing that we were going to perform for a large crowd. This is when we shift the practices into rehearsals, the lunchroom to the auditorium — and the stage.

The backstage crew hustles around the stage, taking notes on when to turn on the stage lights. Dance performance groups gather in the corner of the auditorium, practicing their routines three times quickly, for synchronization and clarity. Singers have their earbuds on and their fingers plugged into their ears, trying to harmonize with their partners without sounding like a cacophony of noises.

During these moments, I feel as if this is an amalgamation of cities: the romantic love of Paris, the hustling impatience of New York, and the flashing red and white lights of Las Vegas.

Finally, on the day of the performance, our nerves reach an all-time high. The annual Lunar New Year Productions Club performance is an anticipated event at Bronx Science, so the auditorium seats were always filled to the brim (pre-pandemic). Curious observers looked through the back window and security guards stood in the back of the auditorium, while club members cheered for their friends in the front row.

As I sang, I silently thanked each and every one of my overjoyed companions in the front row. I thanked them for offering me a haven, a place where I could uncover the underlying beauty in my language and culture. I thanked them for their collective urge in pushing me forward whether it was through their singing, dancing, words of encouragement, or simply by being in the club.

Finally, I thanked them for adding color to my canvas — my community.

After the performance, all of us quickly raced out of the school and into the night, where the crisp wind cooled our overheated bodies. There was a smoky dull hue of red and orange in the night sky — steady strokes of paint on the dark canvas. Each of us were bundled up, yet sweaty, puffing out cold air. I could see in my fellow club members’ eyes what I saw so vividly in mine — euphoric passion, gratitude, and grit.

The singer’s tone was steady and measured, like a string that has yet to be plucked. However, as her voice grew louder, and the octave went higher, the two dancers left their formation and began to twirl rapidly, becoming a blur of white silk.