Bronx Science baking club is not just about mixing ingredients — it's also about the mixing of ideas. 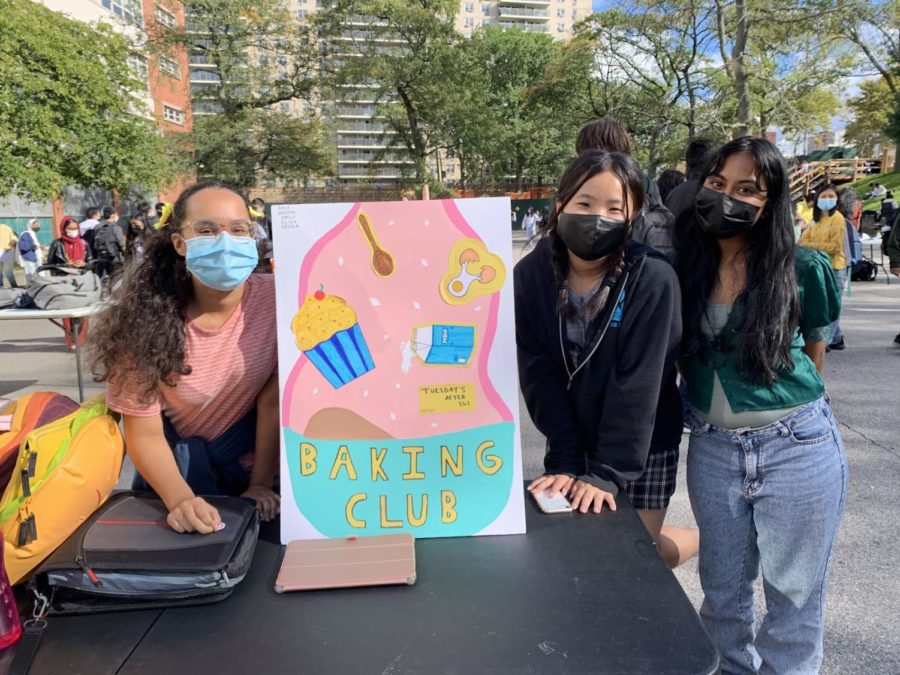 Baking Club board members promote their club at the annual Club Fair in October 2021.

Room 337 fills with the sound of crackle and sizzle every Tuesday during 11th period. The aroma of freshly baked goods fills the hallway of Bronx Science, enticing countless students to the doorstep of the Baking Club. From chocolate chip cookies to lava cake, unique recipes are created by students, while allowing them to bond with their peers over baking fresh goods.

“The thing with the Baking Club is that it’s not just one group of people; instead, it’s a melting pot of people. Everybody comes together with one recipe to make, and everybody has fun,” said Ms. Coombs, the faculty advisor of the Baking Club.

What draws students to the Baking Club?

The Baking Club has been around for over ten years, providing Bronx Science students a stress-free zone to help them cope with the rigorous academic environment of our school, while also fostering their love for baking. “The Baking Club is overall a very large club that is arts-related rather than academic-related, which gives students the opportunity to explore their hobbies outside of classes in a way that is fun, low stress, and enjoyable,” said Sadia Ali ’22, the Baking Club president. “Having a large arts-related club like this is somewhat uncommon in a school like Bronx Science, where academic, science or culture-related clubs dominate.”

The Baking Club is one of the very few clubs at Bronx Science that revolves entirely around food. Although the members of the club vary in their time commitment in the club, everyone acknowledges their common love for baking. “I am really passionate about baking, and it gave me something to do during quarantine. Learning about the science behind it was the best part,” said Emily Hsieh ’24, the secretary of the Baking Club.

“I just like cooking,” said Alex Chen ’24, a fellow member of the Baking Club.

While for many the Baking Club is a place to explore their passion, for others it’s a place to learn new things. “I joined the baking club so I that could learn how to do it,” said Elsa Chang ’24, vice president of the Baking Club.

Along with baking, the club promotes an open environment for its members to express their creativity and just have fun. “My favorite part of the Baking Club is our sense of community. I love to talk with the members about what’s going on, what they’d like incorporated into the Baking Club, and just overall, enjoy the fun conversation,” said Ali.

“It’s good to see everybody having fun and enjoying their time together,” said Ms. Coombs.

So what does a regular Baking Club day look like?

The club convenes on a weekly basis. Every week, students vote on a recipe and bring in any special ingredients needed for the winning recipe. Students take their place at designated tables and work in groups in order to make their treats.

“While the food is baking, students clean up, and then we all eat,” said Ali.

“It’s rewarding and enjoyable being able to bake with friends,” said Janine Choy ’24, a fellow member of the Baking Club. “The music and environment of the club are some of the best.”

The Baking Club is open to all students at Bronx Science. Each year, the club gets new applicants during the school’s annual Club Fair. “Just this year, we have gotten over 370 sign-ups,” said Ali.

So how does the Baking Club fit all 370 students? Ali notes that in order to accommodate the large number of applicants, the club created a system in which the students can sign up for every other meeting, in order to give others a chance to participate. The club also offers virtual sessions and at-home cooking options where students bake through Zoom or send in photos of their creations. “I highly recommend joining at least one Baking Club meeting during your time at Bronx Science,” said Choy.

You can access the club updates on their instagram page. If you like baking with friends, or even baking at home alone, then the Baking Club is the place for you.