The Vitality of the Bronx Science English Department

The Bronx Science English Department flourishes at a school with the word “science” in its name. 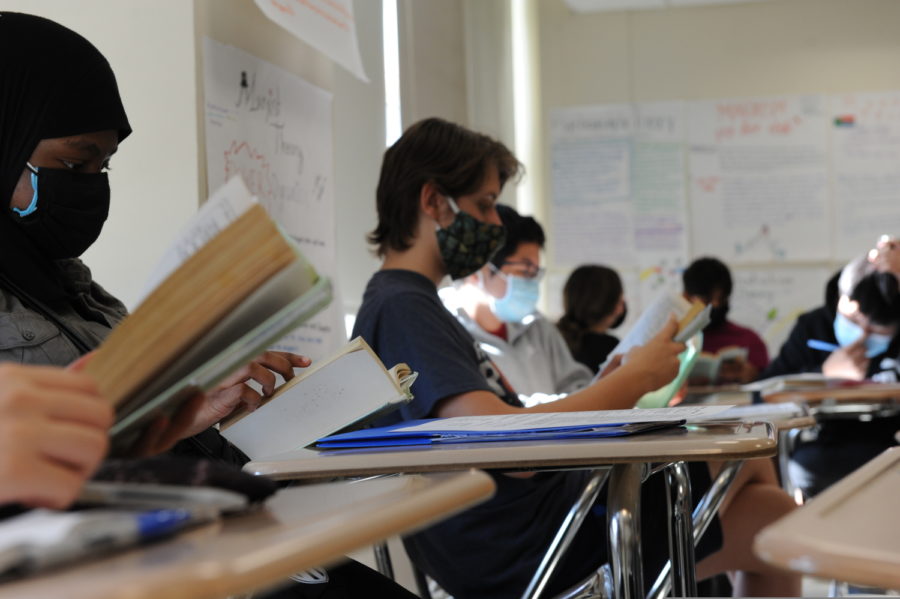 In general, Bronx Science students are highly supportive of the humanities. “I think that my English class is useful, because the exposure to new texts and the class discussions give me a broader perspective on the world. My STEM classes do the same thing, but in different ways,” Eva Uddin ’24 said.

As you walk into the Bronx Science building, you cannot miss the giant mosaic mural that is placed above the front entrance. At first glance, it appears to be an ode to scientific achievement: robed men and women scatter the colored space, examining vials and oversized atoms. What may not be immediately obvious, however, is the robed figure that stands behind the scientists, his arms outstretched, lending himself to the mural’s title: “Humanities Protecting Biology, Physics, Chemistry.”

The mural serves as a reminder to never forget the importance of the humanities, even within a science-focused school. Bronx Science is home to eight Nobel Prize winners, but it has also produced seven Pulitzer Prize winners. Biochemist Robert Lefkowitz has spoken of his time at the school fondly, but so have acclaimed writers E.L. Doctorow and Gene Weingarten.

Twenty years ago, the English electives offered at Bronx Science included Women in Literature, African-American Literature, The Bible as Literature, Poetry, Shakespeare, Playwriting, Evil in Literature, and Forensics, none of which are currently on offer during the 2021-2022 academic year. Over the past decade, the rise of the importance of Advanced Placement courses, which colleges and universities like to see on students’ transcripts in abundance, has made it extremely difficult to secure enough student enrollment to offer English Department elective classes. Many years ago, Mr. Gazzola, a Bronx Science English teacher, taught Forensics, a public speaking elective. The course is no longer offered, yet Mr. Gazzola believes it to have been the best English course at the school.

“These students were leaving my class with incredible skills – I held the bar up really high. I would teach them as if I were teaching their parents,” Gazzola said. “These tenth graders who were only fifteen years old would give speeches that sometimes would almost make me want to cry because I couldn’t believe what I was witnessing.”

The disappearance of English electives can be mainly attributed to the rise in demand for Advanced Placement classes as electives, as noted above. It was easy for students to take elective courses in 2002, before the rise of importance in AP classes. Over the years, the Bronx Science administration has adjusted the school’s course offerings to align with the wishes of students, who tended to prefer AP over elective courses, given their importance in college admissions. There has been discussion in recent years about creating a Science Fiction elective, but the English Department has yet to garner enough student interest in order to make the course a viable option.

Advanced Placement courses demonstrate academic rigor to colleges, but Bronx Science’s former English electives were equally as challenging. “In Advanced Placement, I think you’re learning very specific skills. Maybe you were not getting those same skills in English electives courses back when we offered them, but you were gaining other skills instead,” Mr. Gazzola said. “You had more freedom in what you wanted to read in elective courses.”

In recent years, the English Department at Bronx Science has been transforming to encourage more student involvement within the classroom. Students have more of a say in choosing which texts are taught to them, and English teachers are making a concerted effort to focus on selecting more contemporary literature that is directly applicable to current students’ lives.

Although students often come to Bronx Science for its rich Science electives and its renowned Science Research program, many Bronx Science students also make an effort to balance their STEM classes with rich humanities subjects. There is no one consensus on the relative ‘usefulness’ of different classes, and to teachers, it’s not always clear whether students are prioritizing one subject over another. Dynamo, the school’s literary magazine, attracts arts-oriented students to its meetings each year, and there are currently 109 students taking the Journalism and Yearbook Graphic Design Studio English electives, writing for the ‘The Science Survey’ newspaper and ‘The Observatory’ yearbook, all of whom are interested in creative writing, journalistic writing, graphic design, and photography, all traditional humanities oriented subjects.

“Just because the school’s name is ‘Bronx Science’ does not mean that all of the students who enroll here are exclusively students interested in STEM,” Mr. Bausili said. “Over the years, I’ve had a lot of students who were really engaged with the humanities, and I think that all of them understand on some level that knowing how to read and knowing how to write is crucially important, regardless of what field you end up in.”

During the 2021-2022 academic year, the Bronx Science English Department has, and will continue to be, an undeniable vital presence at Bronx Science. Students just have to remember the man on the mural in order to recognize the importance of English classes in all aspects of their future careers.
“Just because the school’s name is ‘Bronx Science’ does not mean that all of the students who enroll here are exclusively students interested in STEM,” Mr. Bausili  a Bronx Science English teacher, said. “Over the years, I’ve had a lot of students who were really engaged with the humanities, and I think that all of them understand on some level that knowing how to read and knowing how to write is crucially important, regardless of what field you end up in.”