Bringing Life Back to the Underground

New York City's reopening plan is advancing full steam ahead, and now it is time for the MTA to climb aboard. 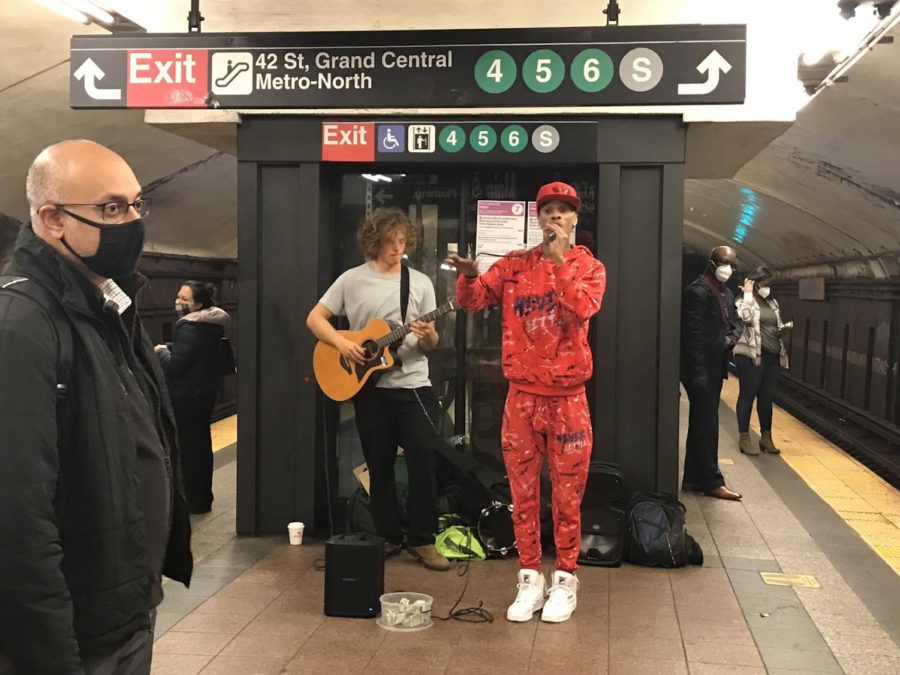 Some performers prefer the more open spaces of the train platforms.

On November 1, 2021, the MTA had an estimated 3,026,879 riders. The MTA’s extensive transit system allows regular subway-goers to experience New York’s rich underground culture where beautiful murals, little carts of churros and fruits, and some music are commonplace. But let’s be honest, we have probably heard a lot more than just “some music.”

New York possesses so much talent that it’s filling up our underground systems. There are performers everywhere: on the train stations, on the platforms, and even on the train cars. “They help to make the subway rides a little less boring,” Wei Ni Zhang ’22 said. But as COVID-19 crept in, most performances stopped. Most performers were either afraid of contracting COVID-19, decided that it wasn’t worth it playing to an empty station, or both.

But with New York taking steps toward reopening, the MTA has decided to bring back their Music Under New York (MUNY) program on June 4th, 2021, more than 14 months after public performances stopped.

MUNY was introduced in 1985 to organize the overwhelming number of performers in the subways by giving select musicians permits and their own spot in the subways to play. Today, there are more than 350 individual performers and ensembles who perform at around 35 bustling locations throughout the MTA transit system.

MUNY is a great opportunity for any performer, but not just anyone can participate. Every year, the MTA holds auditions in Grand Central Terminal to review and add new performers to the MTA MUSIC roster. Anyone can apply for an audition, and those who are eligible will be invited to a live, public, and one-day audition. “I was surprised to learn that auditions were held for MUNY, as it definitely felt like something that many commuters probably don’t know about,” said Jessica Zheng ’22.

Auditions last only five minutes and are judged by a panel of professionals and representatives from the music industry, cultural institutions, and MTA station operations. The criteria for these auditions are quality, variety, and aptness for the mass transit environment. Moreover, these performances not only need to be appropriate but must also work within the large, open spaces of the subway station.

The special few who are chosen receive a personalized MUSIC banner to display during their performances and are educated about the regulations of the transit system, including passenger safety and comfort.

Due to the ongoing Coronavirus pandemic, only solo performances are current allowed. However, starting on May 17th, 2022, group performances will be allowed to return. Performers are socially distanced, given special protective gear such as singing masks and instrument masks, and are encouraged to get vaccinated.

So what are commuters’ opinions on these performances? Well, those who were not particularly fond of these subway performers in pre-COVID-19 times are starting to see them in a new light. Natalie Shon ’24 said, “It was definitely gratifying to hear the performances. It was like part of the world was returning to normal again.”

So, if you enjoy listening to the diversity of New York on your commute, be on the lookout for the pink ‘Music Under New York’ banners. You will be sure to hear some great music.
“It was definitely gratifying to hear the performances. It was like part of the world was returning to normal again,” said Natalie Shon ’24.