Big Sibs: Back and Better Than Ever

After a year and a half of remote learning for many students, Big Sibs from the class of 2022 are working to assist 1400+ underclassmen in a newly expanded version of the Bronx Science mentorship program. 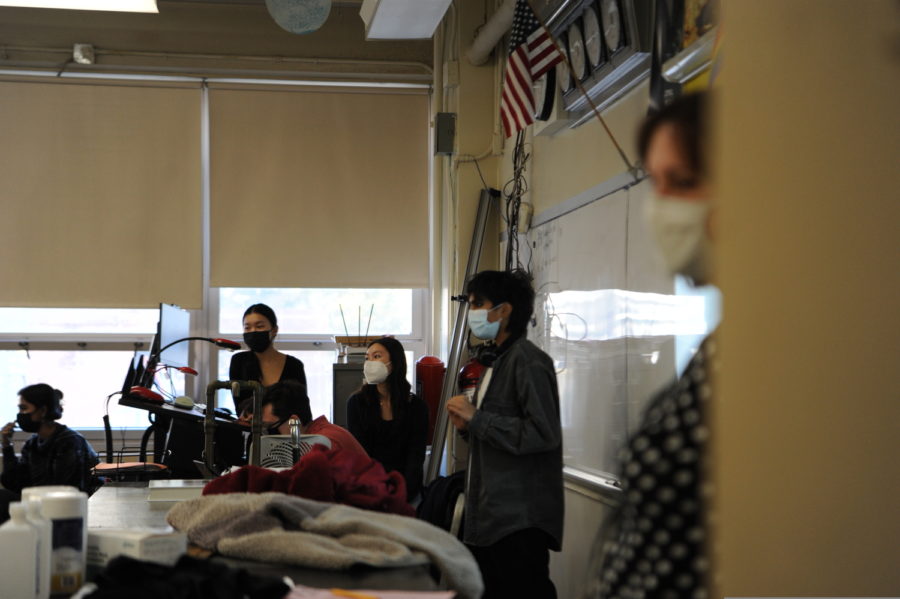 Big Sibs Emily Shang '22, Grace Lim '22, and Saamiya Ahmed '22 take the lead during a monthly advisory session for homeroom A01.

Most of us can remember walking into Bronx Science for the first time, pushing through the green doors, staring up at the mural displayed across the entryway, and predicting where the next four years will take us. The seniors — seemingly all-knowing and decked out in green and yellow Big Sib gear — would hand out maps and greet us newcomers with a smile, welcoming the next incoming ninth grade class into a large, distinctive family of around 3,000 students.

Our five Big Sibs took us on tours, taught us how to open our lockers, introduced us to our food truck options, gave us study tips, and met with us at advisory meetings each month. Having grown accustomed to Bronx Science facilities over four years, Big Sibs take on many roles within one title: they are fellow students, mentors, ‘sib’-lings, and friends.

The Big Sib peer-to-peer mentorship program was introduced in order to help ease the transition between middle and high school for incoming students. Throughout the year, selected seniors share their experiences with the next generation of Wolverines, guiding them as they start a new chapter here at Bronx Science. Freshman advisory (the mandatory guidance period that occurs monthly afterschool on Mondays) is integral to the process, with new students receiving lessons in everything from diversity and inclusion to course selection. Around five Big Sibs — coming from all backgrounds, extracurriculars, identities, and interests — stick with each ninth grade homeroom until they officially graduate in June. Seniors interested in becoming Big Sibs apply to the program in the Spring of their junior year. It is a competitive application process that includes a written statement, a short teacher recommendation, and a group presentation, all of which were administered virtually last Spring 2021, due to the Coronavirus pandemic.

After a year and a half of virtual learning for many students, due to the coronavirus pandemic, the pressure has heightened for the 117 Big Sibs in the class of 2022. “This year’s cohort of Big Sibs is special in that the Big Sib program has never had to interact with as many Lil Sibs, and probably will never have to again in the foreseeable future,” said Selina Li ’22, one of the Big Sib program’s directors.

On the first day of school this year, instead of the usual 700 eager new students, 1,400 ninth graders and sophomores walked through Bronx Science’s doors, most for the first time. Once close to empty hallways were filled by bustling groups of underclassmen figuring out how to open their lockers for the first time. Some inevitably swarmed the middle staircase, others accidently walked into the wrong class during the wrong period, and many asked Big Sibs to help them navigate as they searched for their classrooms in a new building.

Big Sib William Wu ’22 pointed a ninth grader to the bathroom before suggesting that he could take him to the bathroom’s entrance, noting that it was “a little hard to find.”

While many Lil Sibs navigated Bronx Science for the very first time in September 2021, their Big Sibs were re-transitioning to Bronx Science themselves, greeting friends they hadn’t seen in-person since their sophomore year. “It was a bit difficult to try to remember where everything was,” said Big Sib Anna Vikatos ’22. “But the group effort proved to be successful.”

During the first week of school, Big Sibs were identifiable by their ’22 Big Sib shirts, with a design featuring a minimalistic bubble-text arrangement of Bronx Science’s school colors. “Several people have told me the design is reminiscent of Keith Haring, which I think is a flattering compliment,” said artist Mia Goldberg ’22, whose design was selected in a Big Sib majority vote. “I am a big fan of typography and use of space in graphic design, so I knew I wanted a really minimalist but eye-catching shirt,” said Goldberg. The T-shirts are worn at Big Sibs events throughout the year.

Camp Science, the introductory event held at the end of 8th grade, was still online in June 2021. In August 2021, the in-person Orientation hosted both the ninth graders and sophomores in a multi-day event. This academic year, however, all Big Sibs meet with both underclassmen homeroom equivalents (ex: A02 and B02) and stay after school several times a month in order to host advisory sessions. The Big Sibs independently design the guidance presentations and work alongside each homeroom’s guidance counselor.

“The advisory sessions are the most work to set up and plan. During the advisory, it’s hard to keep up engagement and be entertaining at the same time,” said Enrique Labre ’22.

But working with both ninth and tenth graders has allowed the Big Sibs to expand their reach and make more of an impact; it is a unique twist on the program that will likely (and hopefully) never happen again. “The two grades are quite different from each other,” said Goldberg, who has had the opportunity to observe them both. “The ninth graders are more eager to interact with each other and are very enthusiastic about it, but the sophomores are more reserved with fewer questions.”

The experience has been especially rewarding for seniors who are interacting with their peers in-person for the first time since quarantine. “I love how my assigned ninth graders and sophomores aren’t hesitant about sending emails or greeting me in the hallways,” said Wu. The Fresh & Fringle and Sophomore Social — socialization events coordinated by the Bronx Science S.O. —  “were the most fun I have had in a while and a welcome distraction from college applications,” Labre added.

Four years from now, the current ninth graders will also have become fully acquainted with the school and will have the opportunity to serve as Big Sibs themselves, continuing the perpetual cycle for our ever-changing Bronx Science community. In the meantime, they will learn to adjust, exploring all that Bronx Science has to offer under the guidance of their Big Sibs. “Being at a school like Bronx Science offers you the amazing opportunity to pursue whatever you are thinking of,” said Labre.