The American Sign Language Education Club at Bronx Science is flourishing, getting students interested in learning about the language and the Deaf Community. 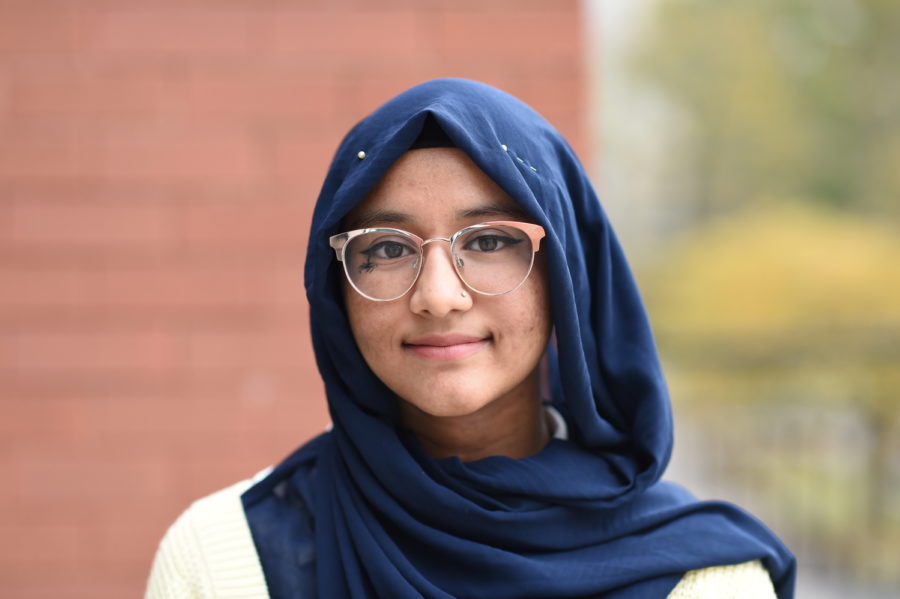 Tanisha Khan ’22, Co-President of the ASL Education Club always questioned the lack of knowledge of ASL in the general population. “It was weird to me that it wasn’t common to learn ASL,” Khan said.

With the use of their rapidly motioning fingers, hands, arms, and varying facial expressions, Tanisha Khan ’22 and Wagiha Mariam ’22 have just had a conversation. Without a single noise, the two students have spoken several sentences. It’s not a secret code, but rather the result of their efforts running the American Sign Language Education club at Bronx Science.

But what even is American Sign Language? Is it English? American Sign Language, known also as ASL, is used by about 250,000 to 500,000 hard of hearing people in the U.S. and Canada. It is considered its own language, with its own rules for word order, pronunciation, and grammar. Because tone is not possible in this unspoken language, ASL users use facial expressions. Just like any spoken language, there are dialects, as signs, slang, and rhythm vary across regions.

So why make a club that provides ASL to any interested Bronx Science students and teachers? Wagiha Mariam ’22, one of the co-presidents of the club, ties it back to the community. “I was inspired by a hard-of-hearing student at Bronx Science who was having difficulties adjusting to being at a specialized high school. I wanted there to be a space for students of hard-of-hearing as well as students who wanted to learn,” she said.

For Tanisha Khan ’22, the fellow co-president of the club, she notes that, “it seemed like a little known topic. It was weird to me that it wasn’t common to learn ASL.” Hence, the ASL Education Club was born. With the goal of pushing for even more inclusivity at our school,  the club hopes to provide an opportunity to learn ASL and to learn about the community dependent on it.

For many, ASL plays no role in their day-to-day life. Not even all deaf and hard-of-hearing people know ASL. Out of the 48 million people in the United States with hearing loss, only around 500,000, or 1%, use ASL. This has led to the general public’s lack of knowledge about the language and the hard-of-hearing community, despite it being the third most studied language in colleges and universities, according to a 2016 study by the Modern Language Association. “A lot of people think they don’t have to learn it because it doesn’t apply to them. It’s just a form of respect to learn that for other people, even if you have no connection to that community,” said Khan.

However, it is not just the hard-of-hearing or deaf community that benefits from ASL. People who lose their hearing because of age, occupation, and other factors all benefit from ASL.  Knowing ASL allows one to communicate with a diverse range of people, from other hearing ASL users to those who are hard-of-hearing. “I wanted to make myself more accessible in order to help me connect with a larger group of people,” said Mahnaz Ahmed ’23, a member of the club. “I think that communication is a skill that allows us to better ourselves as people, so why wouldn’t I want to be able to learn a new way to do so?” Ahmed said. In their push for inclusivity at Bronx Science, Mariam and Khan are accomplishing something that is truly amazing. So, what does the ASL Education Club usually do?

The regular schedule of the club begins with presenting a list of vocabulary surrounding a certain topic. In the early months of meeting, the club started with the alphabet and then moved on to introductions. After learning the new vocabulary, the students practiced by signing questions and answering them in conversations.

The club often uses games in order to better remember the signs they learned that day. For example, after learning the alphabet, the club plays a familiar childhood game of seven up, where one attempts to guess who touches them. Rather than speak, the members of the club would sign the name of their guess, using their new skills. “The most fun part of the club is engaging in the activities that help enforce our knowledge of ASL, such as playing silent 7 up,” said Ella Stanley ’24, a member of the club.

Despite the many benefits of ASL, Mariam notes that teachers and parents are more likely to look for other methods to “heal” their hard-of hearing children. “They just try to change deaf people to be more like hearing people, which they shouldn’t do because we should accommodate hard-of hearing people instead. They should be actively represented,” Mariam says.

In fact, the Deaf community has its own culture and does not see being hard-of hearing as a disability, or as something that needs to be fixed. As Deaf advocate Eileen O’Banion told Healthy Hearing, “When you are Deaf, you see the world in a different way. You don’t believe you have a disability- and you don’t want to be fixed.” Rather than force hard-of-hearing and other deaf people to adhere to the standards of those who are hearing, Mariam and Khan believe in creating a space where the deaf community can be accommodated in a hearing world.

Joining the ASL Education Club is the first step you can take to help promote inclusivity, especially within the school. You can access their instagram account for updates on the club! For further resources, there are many videos, online classes and webinars, and apps that can provide more assistance in learning ASL.