Female and non-binary skaters of all ages and backgrounds are cruising past stereotypes and kickflipping over gender discrimination. 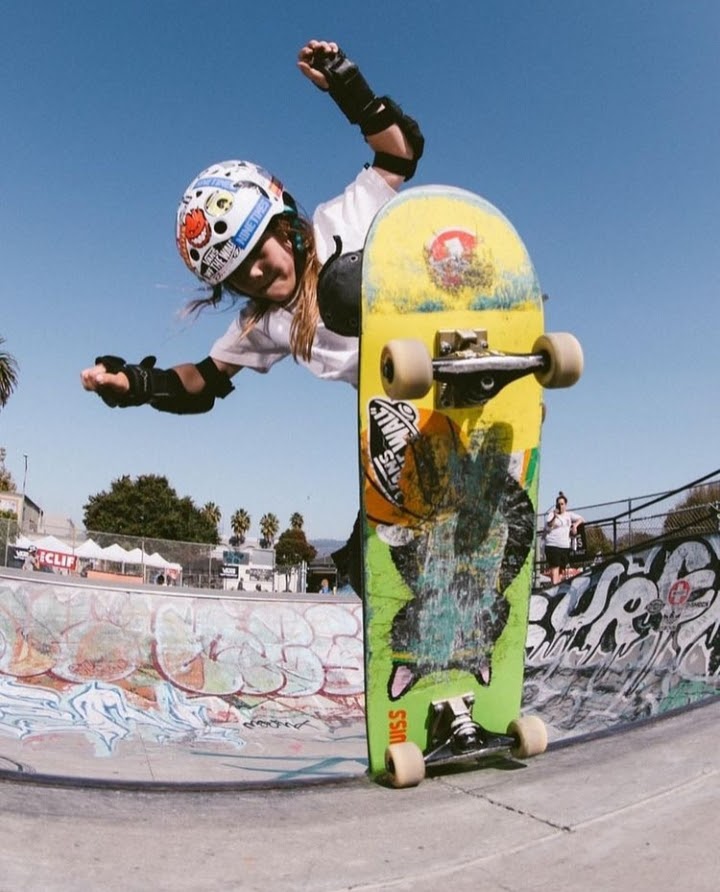 Eight-year-old Reese Nelson gears up as she performs a drop-in slide trick. She has made many great friends through skateboarding. Some of her closest friends are skaters in Canada, but she has also made many friends after moving to the United States.

“Steps of an ollie.”

“Easy beginner tricks to learn before an ollie.”

This has been my YouTube search history for the past two months, as I have tried to pick up skateboarding. Skateboarding is the sport that turns concrete streets into ocean waves. Although originally it was created to replace surfing when there were no rideable waves, it has developed into different unique techniques: vertical style, aerial tricks performed in half-pipes, and street style, tricks performed in an urban environment with rails and stairs. Not only has skateboarding developed technically, but it has also expanded to youth subculture, focused around community and creativity.

For someone living in a large city, seeing groups of skateboarders ollie up curbs and slide down handrails is common. It is less common to see female and non-binary skaters among them. Since its creation, skateboarding has been a male-dominated sport, made up of  about 77% male skaters and only about 23% female skaters.

Lucinda Jacobson, who started skating with her brother when she was young, said, “For the first year that I started skating, I didn’t have any girlfriends who skated. It wasn’t until this summer that I started meeting more girls.” She continued by explaining how other female skaters comfortably come up to her in skateparks. “Whenever I’m at the skate park and I see another girl, it’s kind of an unspoken thing that we are already friends. Girls come up to me all the time at skateparks — and even on the street — asking me to help them, because it’s really scary to talk to guys.”

Jacobson explained how sexism at skateparks is prominent and reveals itself through different standards. Occasionally when she does warm-up tricks, guys around her act surprised, regardless of the simplicity of the trick. She remembered, “This one time I was at a girls’ skate event, and I did a run on a mini ramp, and a guy came up to me and told me I was pretty good for a girl. Again — I was at an event that was made to promote girls’ skating.”

She also described how comments under her skating TikToks wrongly accuse her of being a “poser,” a derogatory term that refers to a person who pretends to know how to skate in order to impress others, despite proving constantly that she is a seasoned skater. Jacobson brought up instances of influential male skaters making degrading comments about girls and skating. “Nyjah Huston who is one of the best skaters right now even said that ‘skating isn’t for girls. Not one bit.’”

Unlike Jacobson, non-binary skater Trish Holowczenko, is a late-bloomer who picked up skateboarding recently in the spring of 2020 during the global Coronavirus pandemic. “One thing I always end up talking about with other queer/trans/non-binary skaters is how we get to live out a second adolescence through this particular activity and community, that we were never welcome in, when we were teenagers,” she said. As she talked about making new friends, she also noted that she has not faced discrimination in real life as an adult. “And I think part of that is feeling much more comfortable in myself. I’m not afraid to take up space, and bullies are weak.  There is still a huge amount of gate-keeping online, though, but on the flip side, there is an increasing amount of visibility of all kinds of skaters, not just young-skinny-cis-heterosexual -white men,” she continued.

Holowczenko is also an artist and shares her art alongside skating clips on Instagram. Her creativity often spills over to skateboarding. “I love the color and dynamic movement that skateboarding offers, to both still photography and video. I also love painting my own decks, and there’s some great artists to follow who use skateboards as a canvas/medium.” She feels good about being a non-binary skater in a male dominated field. “Every new act or post of visibility and encouragement lets one more person know that they do belong in this space,” she advised. She is always inspired by young kids. Every time she sees a video of a young skater landing a kickflip, she grabs her board and heads outside to try it herself.

Reese Nelson, an eight-year-old skater who is on her way to being pro, started skating when she was only a four- year-old. Like Jacobson, she started skating with her brother. According to Nelson, the crazier the sport is, the more she wants to do it. When asked about how she picks up new tricks, she stated that she learns by “watching other people at the skatepark and sometimes through the internet.” However, she also claimed that she is “usually the only girl at the skatepark.”

“It feels cool to be the only girl doing my tricks. For the most part, people at the skatepark have been really supportive. I have a lot of good people around me in the skate community,” she continued.

Although she wants to be a pro and attend the XGames as soon as possible, most of her coaches are male, and she has not met any female pro skaters yet. “It doesn’t matter to me if they’re a boy or a girl if I think they’re a good skater,” said Nelson.

The number of female and non-binary skaters has definitely increased recently. Jacobson has been in and out of the skating community since she was young and claims that over the years, “there has 100% been more girls.” There was a time when she would have been surprised to see another girl skater at her skatepark. “For an entire year of skating, I didn’t have a single female friend who skated. I would run into a girl every now and then, but it was definitely very rare. It wasn’t until this summer that I’ve really begun to see girls,” she explained.

Recently, there has been an influx in all-female skate crews such as the Santa Cruz Lady Lurkers from California, Brujas from the Bronx, and The Skate Kitchen from New York. Furthermore, in the 2020 Winter Olympics in Tokyo, women competed alongside men,, in the first ever Olympic skateboarding games. Later in that same year, Dew Tour, a large skateboarding competition, hosted a women’s event for the first time since its establishment, fifteen years ago. Outside of competitions, there have been many branding opportunities for female skaters, with brands such as Adidas, Brixton, Converse, Santa Cruz, and Vans contributing to funding. Nelson is also an ambassador for BirdHouse SkateBoards and 187 Killer Pads. In a recent Instagram post, she shows off her BirdHouse decks as she grinds along a ramp.

During the height of the Coronavirus pandemic last year in 2020, skateboard edits were going viral, which increased interest in skateboarding as well as gatekeeping from within the community on social media. Overusing memes about beginners and rude comments under Instagram posts and TikToks created an unwelcoming atmosphere around the skateboarding community. Addressing this negativity, Jacobson said, “The internet is a lot meaner than in real life. It completely depends on which park you go to. A lot of skaters enjoy seeing new people skate. It’s more of an internet thing, where people gate-keep. If you want to get into skating, do it.”

Nelson shares the same sentiment as Jacobson. Nelson advised, “You should do what makes you happy. It doesn’t matter what other people think. The skateboarding community is super nice, and you’ll always find someone to help at the skatepark.”

Although there has been improvements over the years, there is still much to be done in the skating community in order to better represent female and non-binary skaters. Inclusive competitions and branding opportunities are just the first steps. In the future, media involvement will be expected to help push away sexist ideas and normalize the picture of various genders within skating.
“I think part of that is feeling much more comfortable in myself. I’m not afraid to take up space, and bullies are weak.  There is still a huge amount of gate-keeping online, though, but on the flip side, there is an increasing amount of visibility of all kinds of skaters, not just young-skinny-cis-heterosexual -white men,” said non-binary skater Trish Holowczenko, a late-bloomer who picked up skateboarding recently in the spring of 2020 during the global Coronavirus pandemic.