On Saturday, January 16th, 2021, The Bronx Science Model United Nations team hosted its 14th annual SciMUN conference. The event was held entirely virtually on Zoom and was incredibly successful thanks to the heroic efforts of the Model UN leadership. 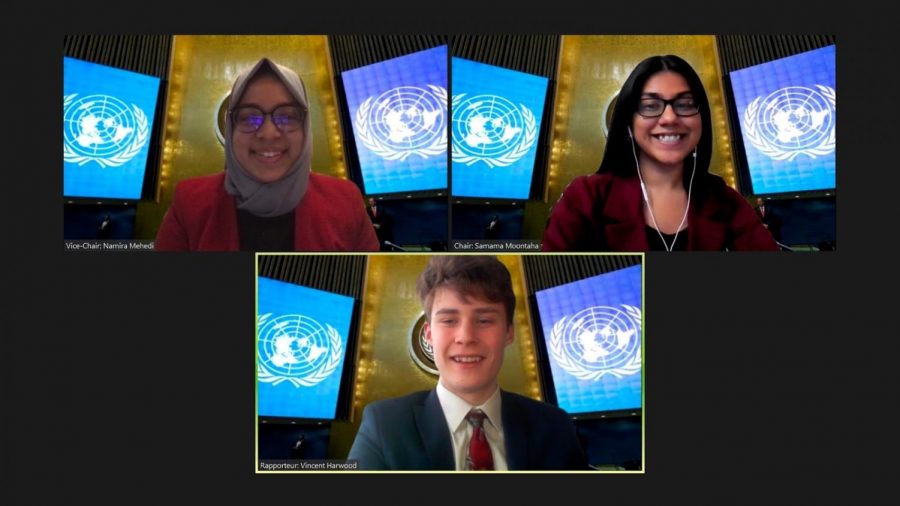 “Are there any points or motions on the floor?”

Committee Chair Samama Moontaha ’21 called the conference into session via Zoom for the first time in SciMUN history. Traditionally, she would be situated in a Bronx Science classroom, equipped with a gavel, presiding over her committee. This year, classrooms became Zoom meetings, each participant separated by a virtual box instead of a physical desk. Shifting this conference, which hosts over 500 participants from schools across the country, to a virtual setting was no easy task, but the Bronx Science Model United Nations team rose to the challenge.

Every year, the MUN team hosts a conference, or competition, at Bronx Science. Model UN conferences consist of several committees, composed of student delegates, who aim to create a resolution, or compromise, regarding their specific global issue. This conference is normally held in the school building, and although organization of the in-person event was daunting, assembling a virtual conference was an even more challenging goal.

The team began preparing for this conference many months in advance, a testament to the immense dedication of the Model UN leadership. “Our team leaders were prepared to deal with the crisis the moment we got back to school. [Members of our MUN team] solve problems [with] split-second notice. When the pandemic hit, they immediately went into action and prepared for the worst. Our background guides were always prepared with Google Docs containing over three months of research and writing structure, [ensuring that the conference] remained in place,” said Ms. Steiker, Social Studies teacher and faculty advisor to the Bronx Science Model UN team.

On the day of the conference, the entire team, including several MUN alumni from the class of 2020, worked to help staff the committees and ensure that the event ran smoothly. The conference began with an opening statement from MUN Secretary General Krish Shah ’21. This speech, customarily given in the Bronx Science auditorium, was pre-recorded and delivered via committee chairpersons’ screens. Although the environment was considerably different, the energy and excitement it ignited in the delegates matched previous years’ in-person statements.

Most Bronx Science MUN members were either Committee Chairs, Vice-Chairs, or Rapporteurs who helped facilitate and organize discussion within each of the Zoom Committees. A Rapporteur, according to the Oxford English Dictionary is “a person who prepares an account of the proceedings of a committee, session, etc., for a higher body; (also) one who presents a report on the current state of a problem, policy, or issue to a commissioning body.” As virtual hands were quickly raised, the Chair and Vice-Chair called on delegates, while the Rapporteur’ recorded the proposed motions on a Google Document. The Chairperson then organized breakout rooms, allowing delegates to have smaller discussions with the intention of building blocs for resolution writing, just as they would have done in a physical classroom. “Although different, given the virtual setting, the flow of the committees went very smoothly,” said Moontaha. “The topics of debate were unique, and most of our delegates definitely put in the effort to stir meaningful debate and introduce creativity.”

No virtual event, however, is without any technical difficulties. The Bronx Science MUN team anticipated that issues would arise and proactively created a Discord Server and a “Technical Difficulties” Zoom link, both staffed by MUN members, to help delegates if needed. Small problems arose, such as the opening speech lagging and becoming inaudible at times, but these issues were fixed with ease. The MUN members drew from their experiences in other virtual conferences, making this event run as smoothly as possible.

“The conference surpassed all of our expectations,” said Moontaha. The team’s tremendous efforts paid off when the conference ran seamlessly with minimal issues. The team’s biggest challenge was recreating “the energy of being in the room where it happens,” said Ms. Steiker. Lively committees and an energetic awards ceremony certainly accomplished this goal.

Bronx Science also generously decided to waive the usual conference fee this year and had a record number of participating student delegates, given that it was free via Zoom. This year’s SciMUN conference was immensely successful, a direct result of the resilience and dedication of the Bronx Science Model United Nations team.
“The conference surpassed all of our expectations,” said Model UN Committee Chair Samama Moontaha ’21.