An Ode to the First Snow Day

The recent snowstorms were an unexpected boon to the kids of New York, if a nuisance for sanitation workers. But there's nothing quite as magical as the first snow day. 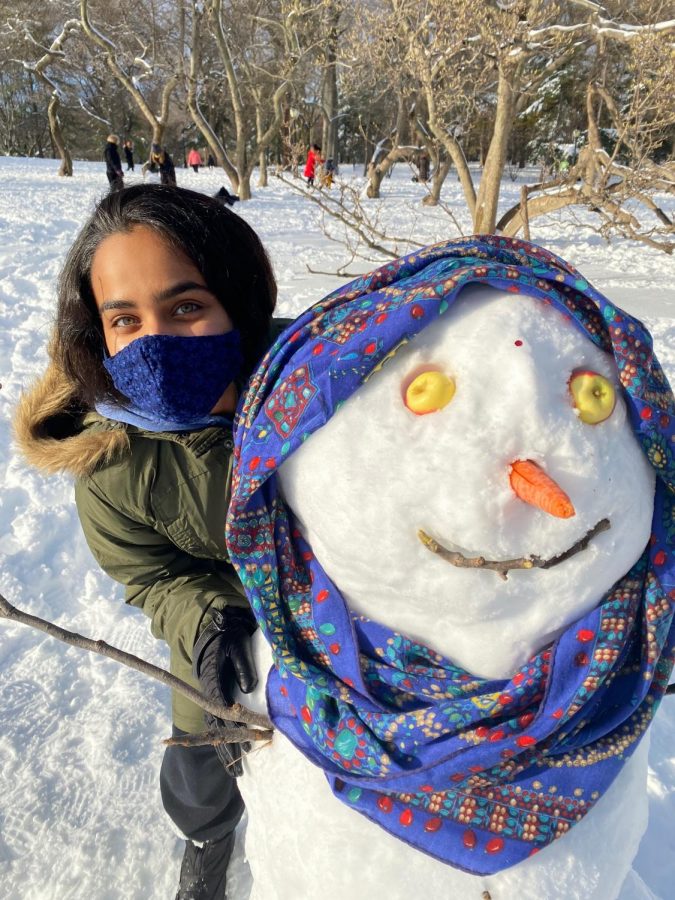 Zoya Garg '21 hugs the Indian snowwoman, named Bindya, that she and her little brother built in Central Park.

Snowstorms may become a norm. At least, it feels that way — lots of snow hit the city streets in December 2020, and in late January and February 2021, with light snow coming down more often than not in the past few weeks. The city has been so snowy, in fact, that a snowy owl has made its home in Central Park since the end of January — a remarkably long time.

This year, snow days feels more momentous. White flurries floating (or crashing) from the sky are a welcome change from the monotony of pandemic life. For most, there’s no long commute to slog through in the early mornings, and more flexible schedules allow privileged parents and children to play in the snow. The usual grown-up grumbling about slush and awful commutes seems to be quieter, perhaps replaced by a sympathy for the essential workers braving harsh conditions and a newfound appreciation for the simple pleasure of snow.

Sounds of children laughing and sledding float through the park. Joy at the snow feels omnipresent. And while flurries became monotonous for a short while, that was a good problem to have.

Of course, the first snow day is always the best one. The fresh downy white blanket is the most novel and the most exciting. Following are the recollections and six-word memoirs of students during that special day, Thursday, December 17th, 2020.

Visited several peacocks and sixteen mausoleums. (I went to the Bronx Zoo and the Green-Wood Cemetery.) — Ellora Klein ’22

Found an abandoned discoball in the snow (there’s a charm in NYC snow days). — Edie Fine ’21

Played in snow with my dog. — Ekaterina Balsan ’21

We sled down the icy snow. — Ella Wilkinson ’21

Just one snowman was not enough. (I built two.) —Enza Jonas-Giugni ’21

My snowwoman wore her bindi proudly. — Zoya Garg ’21 (you may know her as Senior Council President)

Zoya Garg ’21 and her younger brother, Veer, were in virtual classes on Thursday morning when they peered out the window and realized it was snowing. Petal-like flakes of snow fell loftily over Lexington Avenue, actually sticking — not turning to mush — when they landed on the street. Zoya looked at Veer. We need to take a break and play in the snow, they thought. With what seemed like 100 layers on (“our Indian mother was not about to let us go into the snow with less than that”), they ventured out into the park and began making a snowman. Each section started with a small, packed round ball of snow. They rolled each ball to accumulate snow and size (the snowball effect), and it was only a matter of time before their tall snowman stood straight.

But it lacked something. Every snowman around them looked the same. How might they differentiate it?

With an Indian-patterned scarf instead of the traditional top hat! And thus, with a bindi their mother (Zarna Garg, the stand-up comedian) had on hand, their plain snowman turned into a snowwoman —which they named Bindya — proudly representing Indian culture.

Bindya proved to be very popular. “Nearly everyone in Central Park who passed by her asked us if they could take photos of her or with her, even when we had to go home,” recounted Garg. Zoya and Veer were sad to leave their snowwoman after spending two hours creating her, but their mother told them that “the international snowman has arrived in Central Park. It’s bringing people so much joy, it’s a privilege to be able to share it!” “Bindya was way more than a snowwoman,” reflected Garg. “Building a snowman is an iconic American activity in the winter, and we were proud to have infused our Indian culture into it as well.”

“I woke up to a ton of notifications in a group chat with my friends from the neighborhood who wanted to go sledding. We ended up going to a hill on 68th Street and Riverside and spent a few hours there taking turns using the two sleds we had managed to forage from our houses.

1. One of my friends spent half an hour trying to use a sled as a snowboard to get down the hill and couldn’t balance. He wiped out at least 10 times.

2. We built a huge jump out of snow and packed it very tightly, so when we sledded over it, we caught almost a foot of air. That was exciting.”

Happiness, for me, is snow-dusted trees (and powder crunching beneath my feet). — Me!

It is a bright and snowy morning, a transmutation of yesterday’s dark and stormy night. The perfectly cold air crisps my nose and cleanses my lungs. My last class ends around noon, and I enjoy three cold, blissful, exuberant hours outside. (I feel sorry for people with classes all day. Contrary to what the NYC DOE may decree, I think it’s important to take time to enjoy the once-in-a-year weather, and it seems like many people agree. Someone I knew was absent from class and explained to me, “I am… taking a day off to go to the park in the snow.”)

Taking my time, I walk across Sheep Meadow. Ordinarily, this would take three minutes, but this time, I frolic in the snow for an hour, going back and forth, tracing my steps, following in those of others, diving into pristine patches and leaving the mark of my joy. The sun shines bright, melding with the cold air in the most beautiful way possible, and the snow sparkles.

I make it to the Mall and admire the elm trees. Some are tight like brooms. Others are wide and sprawling like claws, reaching over to form arches over walkers like parents shielding children from sleet. All of a sudden, the sky grays and it starts snowing; the trees remain weathered, grandiose, and graceful.

I see five cross-country skiers today in Central Park, one of them circling around Sheep Meadow three times. I see grown adults and children alike running around, pelting each other, and carefully constructing snowpeople. I make several snow angels and jump into the snow as a red fox would. (Snow makes children of everyone.)

This weekend, I am looking forward to going to the Bryant Park Winter Village with two friends. We will sip hot apple cider while our nose-tips freeze, dreaming of snowy 2021 days to come. Something tells me they will.