Teens for Press Freedom: Protecting Journalists and the First Amendment 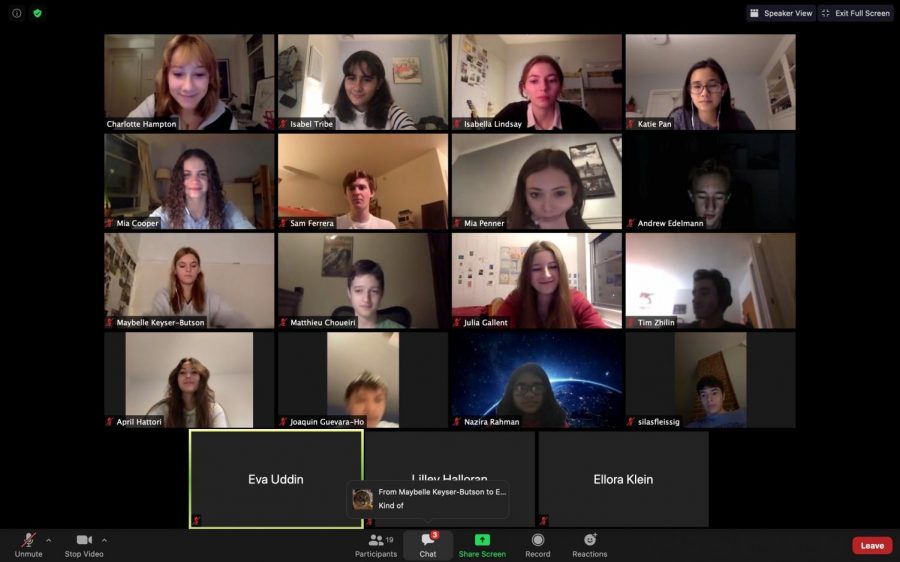 During an all-staff Teens for Press Freedom meeting over Zoom, members discuss new ways to grow their letter writing campaign.

Round-the-clock, unfettered access to virtual news and social media can make it easy to consume and feed into the perpetual flow of information without thinking about where it is coming from. A disregard for the source of the information accompanies a disregard for the journalists providing it and the extent to which authorities will go to censor it. Teens for Press Freedom was formed in order to combat government censorship and to promote media literacy among ‘Generation Z,’ as misinformation and violence towards journalists proves to be more widespread today than ever before.

Freedom of the press in the United States dates all the way back to December 15, 1791, when the First Amendment was adopted into the Bill of Rights. Considered by the Founding Fathers to be a significant symbol of both liberty and democracy, the First Amendment protects citizens’ right to freedom of speech, religion, and press, as well as protest and petition against the government.

A free press is one of the most important aspects of a functioning democracy, preventing corruption by keeping the public informed and monitoring government actions. The press also acts as a platform for all people to be heard, giving representation to minorities and exposing societal issues. Most Americans will agree that the media is important, albeit abused, as 84% of citizens stated that the media plays an integral role in democracy.

Joaquin Guevara-Ho ’22, a member of Teens for Press Freedom, believes that press freedom is especially relevant now, as issues like misinformation, disinformation, and confirmation bias have practically become social norms. “With the amount of violations against our First Amendment rights, especially occurring under the Trump administration, journalists find it more and more difficult to bring forth reliable and objective news to people around the country. Without journalism, our democracy is incomplete,” said Guevara-Ho.

Attempts to violate press freedom and to suppress the circulation of information have always shadowed journalism in the U.S., as evident in the earliest case concerning press freedom in 1734. John Peter Zenger, a printer and journalist in New York City, was accused of libel by the royal governor of New York, William Cosby. Zenger was acquitted by the court and became a symbol of press freedom. His struggle with the law continues into today’s world, as government censorship, which has become increasingly common, restricts the flow of information to the public and promotes a society of uninformed citizens. A pursuit to conceal information from the public can endanger the messenger in the process.

Teens for Press Freedom is a youth-led advocacy project, co-founded by Charlotte Hampton, Isabel Tribe, and Talia Rangel. Based in New York City and Los Angeles, the three teenagers have taken up the fight for journalist safety and freedom of the press by recruiting high school students across the nation. While the ultimate goal of the organization is to pass the Journalist Protection Act — a bill that establishes new criminal offenses for acts of intentional violence towards journalists — and to provide support systems for journalists to freely cover current events and social issues without being harmed, the team also aims to keep the public informed by holding discussions regarding journalism and democracy.

Teens for Press Freedom is divided into three teams: the news team, the workshop team, and the lobbying team. The news team sends out weekly news blasts via email to members and teenagers across the United States; the workshop team makes presentations to cultivate weekly discussion; and the lobbying team focuses on writing letters to state representatives.

Co-founder Charlotte Hampton was inspired to start this project upon seeing the many attacks on journalists while they were trying to cover the Black Lives Matter protests. “Omar Jimenez, a CNN correspondent, was arrested on live T.V., and Josie Huang, a reporter in L.A., was pinned to the ground by the police. Press freedom has been increasingly limited over the past four years, and we need to take steps to reverse those limitations,” said Hampton.

In 2020 alone, over 960 reports were made regarding press freedom violations from national social justice protests. Across the United States, 310 journalists have been attacked. A record number of journalists have been jailed globally in 2020, with at least 274 arrests made around the world and 120 arrests and detainments made in the U.S. This fight is everyone’s fight, not just the journalists’. All American citizens should protect their First Amendment rights and uphold the principles of American democracy.

“Advocating for a free press should be especially important to teenagers today, especially as the Trump Administration has degraded our faith in news media with the ‘fake news’ rhetoric. We need to consume credible news, and we need to start having these conversations,” said Hampton.

The intimidating prospect of seeking legislation and making real change seems less daunting when you are welcomed into the weekly Zoom meetings held by Teens for Press Freedom. Lobbying representatives and spreading awareness about the issues in a community rather than as an individual has both the power of numbers and guidance. As a teenager, you have the ability to join these numbers and protect the future of the First Amendment.
“Advocating for a free press should be especially important to teenagers today, especially as the Trump Administration has degraded our faith in news media with the ‘fake news’ rhetoric. We need to consume credible news, and we need to start having these conversations,” said Charlotte Hampton, co-founder of Teens For Press Freedom.