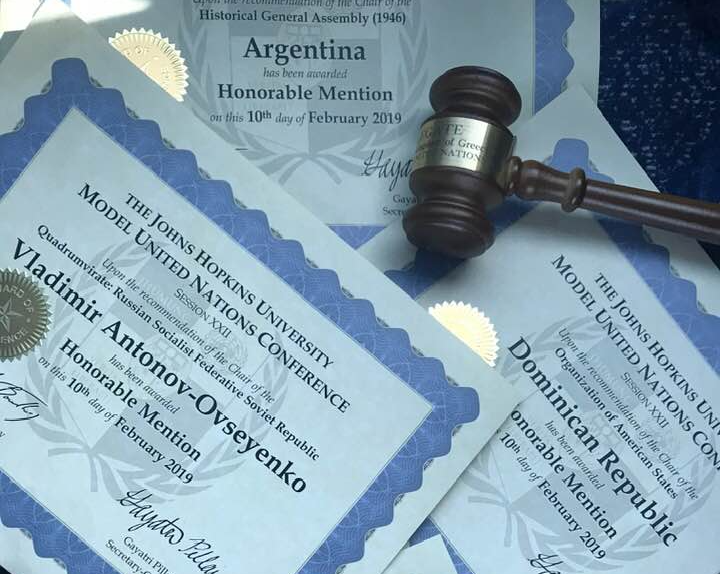 Here is a gavel along with some of the numerous awards won by the SciMUN team at John Hopkins University's recent virtual Model UN Tournament.

The 2019-2020 year was the Bronx Science Model United Nations team’s famed “Year of the Gavel,” with 102 individual awards brought home by the team’s delegates, along with a ‘Best Delegation’ recognition from Columbia University and Johns Hopkins University. Unfortunately, the team’s success with in-person Model UN tournaments was cut short in March 2020 due to nationwide school closings caused by the the COVID-19 pandemic.

With Model UN (MUN) now fully virtual for our unprecedented 2020-2021 academic year, the team’s leadership board spent this past summer preparing for the upcoming year in an attempt to expand upon the success of the 2019-2020 season, with the added difficulty of facilitating the significant changes needed to accommodate the new virtual platforms. SciMUN’s Vice President, Byul Sak ’21, said, “one of our biggest challenges is that going virtual changes how everything needs to be run, everything from how we host our weekly meetings, to how we train our delegates, along with how virtual Model UN conferences work.”

With the SciMUN board having planned out the challenging new 2020-2021 season, the question remains, will this be the team’s ‘Year of the Virtual Gavel’?

The hard work put in by both leadership and the entire team is already starting to pay off. With the results of the delegation’s debut virtual tournament performance on October 10th, 2020, the Bronx Science Model UN delegates were able to prevail using the power of carpe diem, Latin for ‘seize the day.’ Amongst a field of over 300 competitors who gathered together virtually from across the country, the SciMUN Team came out as champions, being recognized as the ‘Best Large Delegation’ at Washington University’s 13th Annual Model UN Conference.

Then only two weeks later, at the 34th Annual College of William and Mary Virtual Model UN Conference, the Bronx Science Model UN team proved themselves even further by earning the Michael Charles Coon Award of Diplomacy along with seven individual awards.

With a team of around 250 delegates during the current 2020-2021 academic year as estimated by SciMUN’s President, Krish Shah, it is now one of the largest competitive teams in Bronx Science’s history. However, Bronx Science’s Model UN team has not always been so popular; just a few years back, the team’s members barely filled up a single classroom.

Interest in joining Model United Nations at Bronx Science is growing, as students of all grade levels are becoming involved with the opportunity to debate on diplomacy, international affairs, and learn the rudiments of parliamentary behavior. Student delegates compete at virtual conferences hosted by schools from around the country, with virtual competitions generally running almost 10 hours a day for up to four days total. With many in person competitive team activities shut down in the 2020-2021 school year due to the Coronavirus pandemic, many Bronx Science students are taking the opportunity to learn more about the world around them at this year’s virtual Model UN.

Given that Model UN is an activity that takes both courage and stamina, many Bronx Science students accept the challenge. “When you join the Model UN virtual team meeting, you find that it is brimming with all kinds of leadership, whether it’s tucked away for some or all out for others,” said Afran Ahmed ’22, a novice who has just joined the Model UN team this year. “What surprises me most about this surge of leadership is how it stems from the debating of foreign relations between people who, for the most part, may not even know each other all that well.”

Ms. Steiker, the faculty advisor of SciMUN and a History teacher at Bronx Science, similarly believes that any student can become involved and will take away important skills from competing. “What students get out of participating in Model UN are the abilities to lead and take charge in the real world. Many SciMUN alumni have continued on and become involved with Model UN in college, and I have watched former students students go on to become engineers and even leaders in our world, having taken the skills that they first learned in Model UN at Bronx Science along with them.”

With so many possibilities for the team, the future of SciMUN looks bright, even in face of the many drastic changes taking place throughout the world due to the Coronavirus pandemic. The Bronx Science Model UN team is ready to take on new heights with every virtual team practice and virtual nationwide conference. What they make of this year will be in the hands of each delegate, eager to learn, compete, engage, and grow. If they seize the day, the power of carpe diem will prevail in the ‘Year of the Virtual Gavel.’
“What students get out of participating in Model UN are the abilities to lead and take charge in the real world. Many SciMUN alumni have continued on and become involved with Model UN in college, and I have watched former students students go on to become engineers and even leaders in our world, having taken the skills that they first learned in Model UN at Bronx Science along with them,” said Ms. Steiker, the faculty advisor of SciMUN and a History teacher at Bronx Science.