How a group of bored seniors accidentally used satellite images to stitch together our memories. 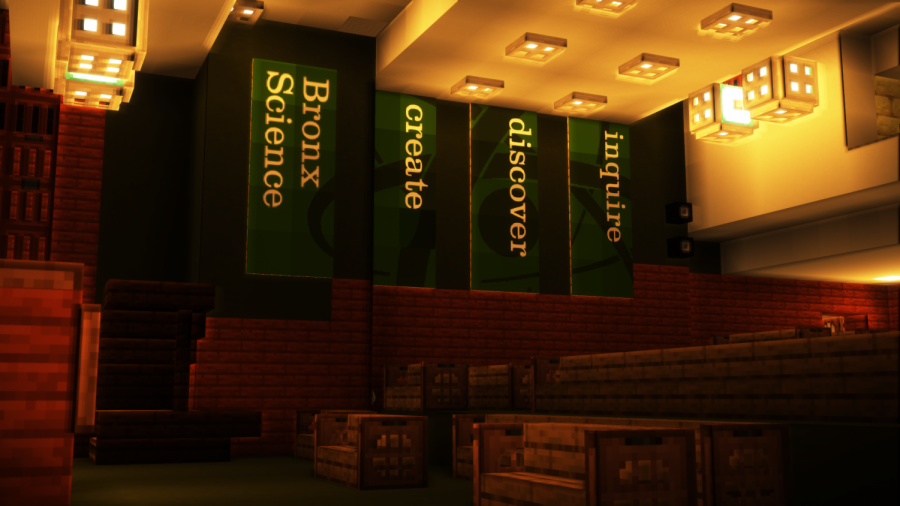 The Bronx Science auditorium in Minecraft is a true simulacrum of the real auditorium.

Directly after New York City Mayor Bill de Blasio closed all NYC DOE schools on March 20th, 2020, How Nam Chung ’20 created a Facebook messenger group with a few of his friends. In the chat, he jokingly suggested that the group should build the entire school in the sandbox block video game Minecraft. With help from myself and Brian Lai ’20, the team set up a Discord server. That night, the initial planning of the build took place on a server hosted by Lai’s personal computer.

The team first started building the northwest side of Harris and the Lehman College street intersection. From there, the entirety of Harris Field was filled out and decorated, along with the streets bordering it. After three days, the team had made it to the front of the Bronx Science plot. The team mostly used satellite imagery and Google Streetview to approximate the sizes of the baseball cages, sections of Harris Field, and even the trees.

As the founders continued to build, applications to join the build team were announced via Discord and the build team started to grow. By the time virtual Bronx Science was completed, the build team had over 30 members and even included alumni from the Class of 2019. A builder’s chat was created so that members could communicate what they remembered about the campus, and share any pictures that they had. Fortunately, Kurt Tio ’20 took the opportunity during the item reclamation day to take reference videos of most of the school’s hallways.

When constructing the campus, the team had an easy time with the exterior courtyard and edifices. However, the interior posed many measurement challenges. “Since blocks in Minecraft represent one meter in real life, we had to compromise on the accuracy of some aspects of the building, such as the number of desks in a classroom. Usually, there are around 20 to 30 of them; but since we are dealing with meter wide desks in Minecraft, we could only fit 9 to 12,” said Lai. The satellite measurements from Google had a margin of error of around 7%, causing many over and under estimations of the building’s dimensions. “Working with the PTA floor plan that we found online was torture. It isn’t scaled or anything, and it even inflates the sizes of some rooms,” said Lai. Despite the many roadblocks that the building’s interior threw at the team, three weeks into the build saw the completion of the entire campus, including the faculty parking lot, the outdoor garden, and the handball court. “There’s something very relaxing about getting parts of the school down, taking a step back, and looking at everyone’s work coming together to build the school that we all love and went to for four years,” said Chun.

With the main campus done, the build team got to work on the facades of many recognizable buildings and structures in the neighborhood. No detail was spared: the apartment building towering over the school, the reservoir building to the right of the campus, and even the Number 4 train station. “It was surreal to see how accurate it was becoming. I really want to make a side by side comparison of the build and the actual campus if there is time after quarantine ends,” said Pelayo.

After a full month of day-long build sessions, the entire build was completed with a staggering 1 million blocks placed. The server launch was announced on April 8th, 2020 via a YouTube Trailer. The virtual Bronx Science campus has been featured on many New York media outlets such as New York Magazine and NY1 TV news. Somehow, the build has even appeared in established Italian publications such as Corriere della Sera, one of the peninsula’s oldest newspapers. A final world download has been made available so that future and current Bronx Science students may appreciate the build.

After a full month of day-long build sessions, the entire build was completed with a staggering 1 million blocks placed…