Sit Back, Relax and Enjoy the Show! Bronx Science’s S!NG graced the stage with yet another fabulous production! 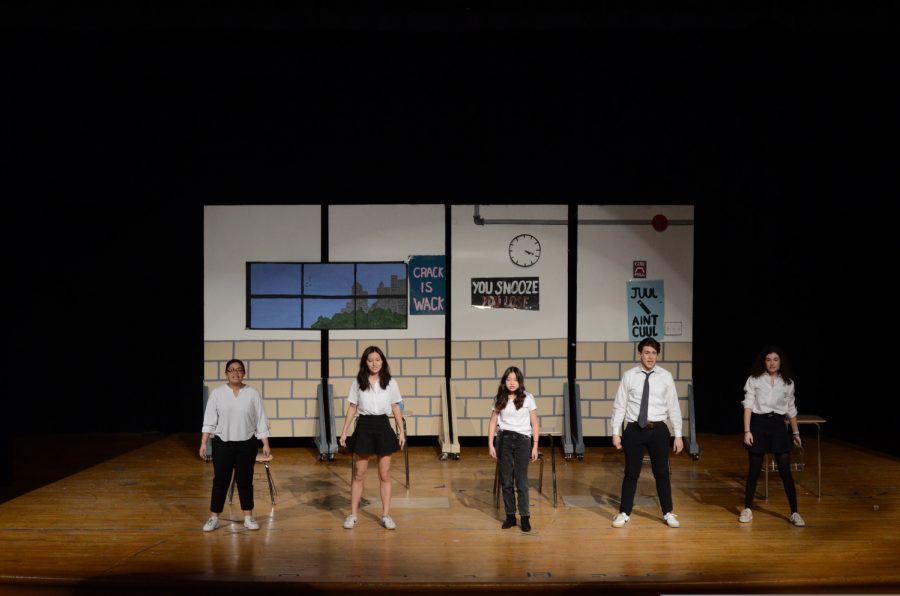 Anthony Bonavita '20 (pictured above), a devoted member of S!NG for the past three years, expressed his joy in performing alongside his friends and cast members. “This was during our first number in our show ‘That's A Band?’. It was so great to put on an original show that encapsulated a story about high school students.” Bonavita said.

Lights, Curtains, Scene! On March 11th and 12th, 2020, Bronx Science’s S!NG was back and better than ever, gracing the stage for their ninth annual showcase. Featuring performances from both new and returning stars, this year’s performance was definitely a date to mark on the calendars. With a plethora of dance numbers and melodic tunes, the production was a night (or afternoon) to remember.

What sets S!NG apart from other student drama programs is that the process is entirely student-run. Aside from the valuable assistance of faculty members Mrs. McGuigan and Ms. Parness, the performance is directed, choreographed, produced, written, and put together by our fellow classmates. Months of practice and late-night meetings demonstrate the time and effort the members of S!NG have contributed towards making this night as entertaining as possible for the Bronx Science community to enjoy.

The performances featured both original and familiar musical pieces, highlighting the harmonious voices of this talented cast, accompanied by moves that reflect on the work of its choreographers. Audience members found themselves engrossed in the performance’s storylines as well, which, unlike other theatrics that take place on the Bronx Science stage, are written by the performers themselves. Working behind the scenes to ensure a successful evening is the backstage crew, whose efficient efforts in creating the set, making the costumes and props, controlling lights and sounds, and organizing the production, has helped to make the showcase possible.

To those who are unfamiliar with S!NG or have never attended a performance, you wouldn’t know that the program actually entertained us with two different plays — each with a different plot and a different cast, separated by a brief intermission. This year, the first set of cast members took a musical route in writing and deciding the story their play revolves around. Inspired by High School Musical, this play, named “That’s A Band?” focuses on five diverse high school seniors who, having met in detention, are offered an irrefutable deal: if they come together to form a band and perform in the talent show, all of their cuts will be cleared. Seeking to avoid detention, they agree to do so, unaware and unprepared for the challenges that they face ahead.

The musical pieces of this skit were definitely a noteworthy feature. Cast members put a unique twist on tunes from popular songs ,rewriting the lyrics in a way which corresponds with the play’s storyline! Melodies from iconic movies, such as Grease and High School Musical, in addition to songs from some of today’s most famous artists, including Fall Out Boy, are some things that students found to be familiar upon watching the show. It wasn’t long before audience members found themselves instinctively bopping their heads, tapping their feet, and humming along with these catchy beats.

“Inline: The Brain Games”, the production’s second show, channeled a more tech-y, modern take in their story. A video game created by a scientist stirs up trouble for five high school students as they get absorbed into the virtual world behind the television screen. Determined to beat a new level, they face increasingly demanding obstacles and difficulties that hinder their endeavor to win the special prize that comes with overcoming this top-notch stage.

With such efforts and dedication, there was a full house of excited spectators. The echoing of musical tunes and rhythms throughout the auditorium and the bright spotlights hitting the one and only Bronx Science stage all pointed towards an experience greatly enjoyed by all. S!NG not only allows us to appreciate the captivating beauty of the arts, but it also provides students with a platform to express their creativity, individuality, and love for theatre.

As a student-run program, S!NG gives students their own voice and provides them with the opportunity to organize and take control of the operation. It also serves as a learning experience for many, with members being able to witness the elaborate procedure and diverse elements that contribute to the production of a play from both an onstage and offstage perspective, collaborate with and meet new friends, as well as obtain a variety of skills ranging from photo-editing, to operating light boards, soundboards, and spotlights, financial handling, and public speaking.

“Among Bronx Science’s three drama productions, S!NG stands out because it’s entirely student run and student written. This gives the opportunity for many students to step up as student leaders by directing a musical or managing aspects of crew, and also gives students the opportunity to showcase their creative side by writing their own musicals and then bringing them to life. Our motto is ‘You don’t have to sing to be in S!NG,’ and this is something we take to heart. Being in S!NG isn’t about being the absolute best singer or actor, it’s about the passion for theatre which allows us to put on such unique and amazing shows,” said Devin Lobosco ’20, a co-president of S!NG.

“Above all S!NG is about teamwork. Whether you’re on set design, program team or in one of the casts, you really do become so close to your team, on a trust level and also on a friendship level. This is what has made S!NG so unique for me at Bronx Science, and it’s something I hope all members come away with as well,” Lobosco said.

For many members, the program serves as a pastime as well — one that allows them to take a break from the stress and pressure that comes from being a student in the midst of a STEM-focused and academically-based institution.

“At a school where most of us are constantly focused on academics, S!NG is just such a great opportunity to take a break from it all and have a good laugh.  Also, S!NG is a perfect opportunity for students to get involved in theatre even if they’ve never had any experience in it before,” Lobosco said.
“Above all S!NG is about teamwork. Whether you’re on set design, program team or in one of the casts you really do become so close to your team, on a trust level and also on a friendship level,” said Lobosco ’20.