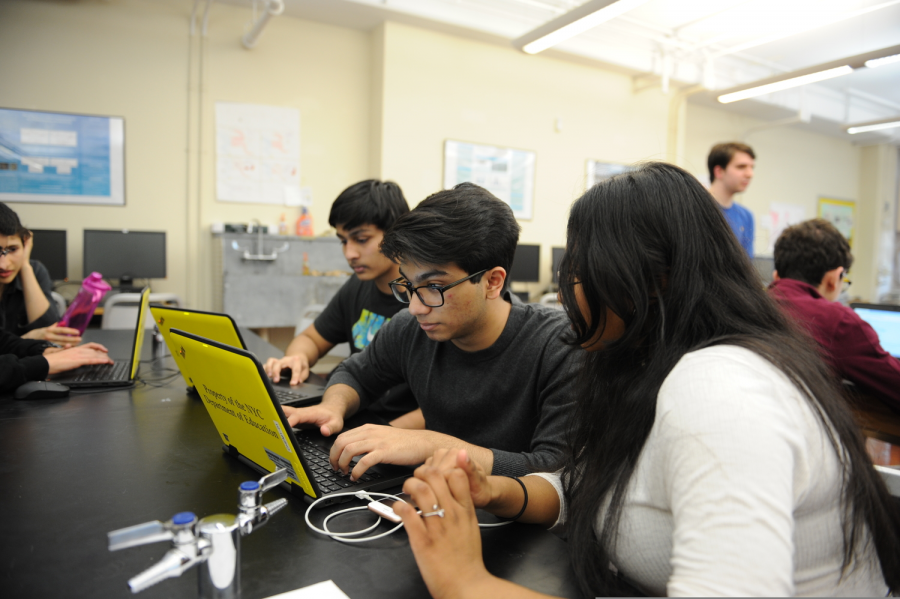 Mohammed Zaid ’21 (left), Tajwar Rahman ’21 (middle), and Ummol Fatema ’21 (right) are working on creating their own neural network in the Machine Learning Club. “It’s a really fun club with great leaders, and it exposes us to a field that seems to be growing more and more important,” said Rahman.

Looking back on their high school careers, adults often say that high school is what you make of it. Some students only seek a diploma and avoid every school activity while others strive to involve themselves in their community in every way possible. Those who enjoy getting involved participate in school plays, the school band, athletic and academic teams, and most importantly, they join clubs. One of the most crucial aspects of the Bronx Science community is its clubs. Every year, the League of Presidents approves new clubs that bring out new student interests to further diversify the school. The following four clubs are only a few of the newly-approved clubs in our school!

Bronx Science, known for its Speech and Debate team, has introduced a new form of debate to its students. The American Association of Foreign Language Debate aims to improve listening and communication skills by challenging students to debate in a foreign language, which is, quite possibly, the highest level of debate.

Inspired by the success of foreign language debate in several prestigious universities, the club has many plans for the future. Its long term goal is to spread the word about foreign language debate to get students more involved in language and improve their discussion and debate techniques. “We plan to meet up with all the specialized high schools to implement the club into their school communities as well,” said President Samantha Mayol ’22. If you want to learn a new language or improve your debating skills, the best way to learn is through implementation, so join the American Association of Foreign Language Debate on Mondays in Room 321!

The Machine Learning (ML) Club helps students to develop their interests in computer science on Tuesdays in Room 331. Through collaborative coding challenges, PowerPoints, and discussions, the club fully immerses its eager attendees in the growing world of artificial intelligence (AI). The club informally began last spring with the creation of a Google Classroom, where people could post and solve ML coding challenges. Since the start of the club, students have learned to create their own ML algorithms and have welcomed guest speakers, such as Jack Cook, a machine learning engineer at The New York Times. Cook taught members how to make an AI assistant that could recognize and classify living things. “I’ve been able to create my own algorithm that takes data and is able to distinguish different kinds of flowers!” said Tajwar Rahman ’21.

As for the future of the club, President Zach Hine ’20 said, “We plan to participate in future school hackathons and create machine learning solutions that can improve people’s quality of life or solve a widespread societal problem.”  The club also has its own blog, The Perceptron, and website, BXSML.

In a world that is increasingly reliant on artificial intelligence, the club is not only enjoyable for those with an interest in STEM, but important as well.

Like the Machine Learning Club, Health Occupations Students of America exposes more students to STEM-related fields, specifically those in medicine. This club, which holds meetings on Wednesdays in Room 130, gives students a unique opportunity to get a head start in the healthcare industry, an important yet uncommon field among students.

Since the club’s leadership is currently composed entirely of sophomores, HOSA has numerous plans for the upcoming 2020 to 2021 school year, including an opportunity to attend leadership conferences. During these conferences, they can learn more about careers in the healthcare industry from certified health officials and compete in tests and projects on prepared topics.

“We hope to appeal to students interested in the medical field and STEM students in general. We also hope to attract students who might not be sure of what field they want to go into,” said Treasurer Selina Li ’22.  For all students who are interested, even if only slightly, check out the Health Occupations Students of America!

The DoSomething Club is an organization that allows students to take action in their community by participating in various campaigns. Since the start of the club in December 2019, members have sent cards to service members, tackled mental health issues, and made posters for school custodians. If providing for the community is not a strong enough reason to join the DoSomething Club, students also have opportunities to earn service hours and win college scholarships.

“Every week, the club has a different problem that we have to solve, so there’s always something that members would be interested in,” said President Skye Lam ’22. If you are interested in taking action in Bronx Science, join the DoSomething Club on Thursdays in Room 007!
Learn new skills! Check out Bronx Science’s new clubs!