The connection between Jim Crow laws and Nuremberg laws. 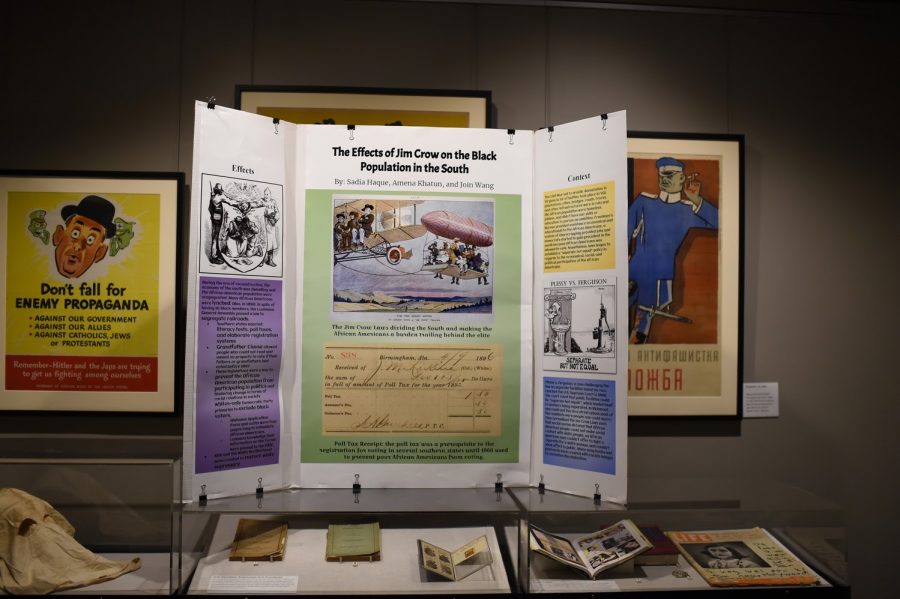 A board that shows the effect of Jim Crow laws on African Americans living in the South.

Bronx Science students learn and celebrate Black History Month in many different ways. One unexpected way that they learn about it is in Bronx Science’s Holocaust Museum. In the museum, there is a new exhibit that opened in February 2020 for students to come to visit. This exhibit shows the connection between the Nuremberg Laws, which is one the legal attempts at targeting the Jewish population, and the Jim Crow laws in late 19th and early 20th century this country. In the exhibit, created by students of the Holocaust Leadership class, visiting students can learn more about the Jim Crow Era in the United States and the Nuremberg Laws.

The Jim Crow Era, which lasted from the Reconstruction in 1877 to the beginning of the Civil Rights Movement in the 1950s,  was when southern states enacted Jim Crow laws to legalize segregation between African Americans and Caucasians. The Jim Crow laws were extreme and enabled African Americans to be treated as second class citizens. These laws allowed for segregation between the two races in public facilities, schools, voting booths, and more. These laws were considered constitutional because of the Plessy v. Ferguson case. This case was in 1896 and it was about Homer Plessy. He was one eighth African American, and so to some, he was not counted as white. Plessy purchased a rail ticket and sat in the seats that were reserved for white passengers. During Plessy’s trial in the U.S. District Court, Judge John H. Ferguson was against Plessy. The result of this case created the “separate but equal” doctrine.

The Nuremberg Laws were created and enacted in Nazi Germany in 1935 in an attempt to isolate the Jewish people from the rest of the German population. The laws ensure that Jews were forbidden from specific occupations such as doctors, lawyers, and holding office jobs. They were also forced to constantly wear the Star of David armband so they could be distinguished as Jews. The Nazis stamped Jews’ passport with a huge J and changed females’ middle name to Sarah and males’ middle name to Islam to further distinguish who was a Jew and who was not.

The exhibit showcases the many similarities and differences between the two events in America and Nazi Germany. Ms. Elizabeth MacEnulty, a social studies teacher at Bronx Science, said, “I want students who are not in the class to come to the museum and think about the legacy of Jim Crow. Having a Holocaust museum in a high school provides students with a unique opportunity for students to engage with difficult topics, and I want students to take advantage of that.” William Mesnick ’20, a student in the Holocaust Leadership class explains, “There is a Black History Month exhibit in the museum because one of our main values of the museum is educating students about many instances of injustice throughout history.” He then talked about the importance of this exhibit: “This exhibit focuses heavily on America, and draws comparisons to Jim Crow to the Nuremberg laws. It is an important part of our history that we are too eager to ignore, so this exhibit is a valuable opportunity for Bronx Science students to learn more this topic.”