A Newspaper of Students, for Students, by Students 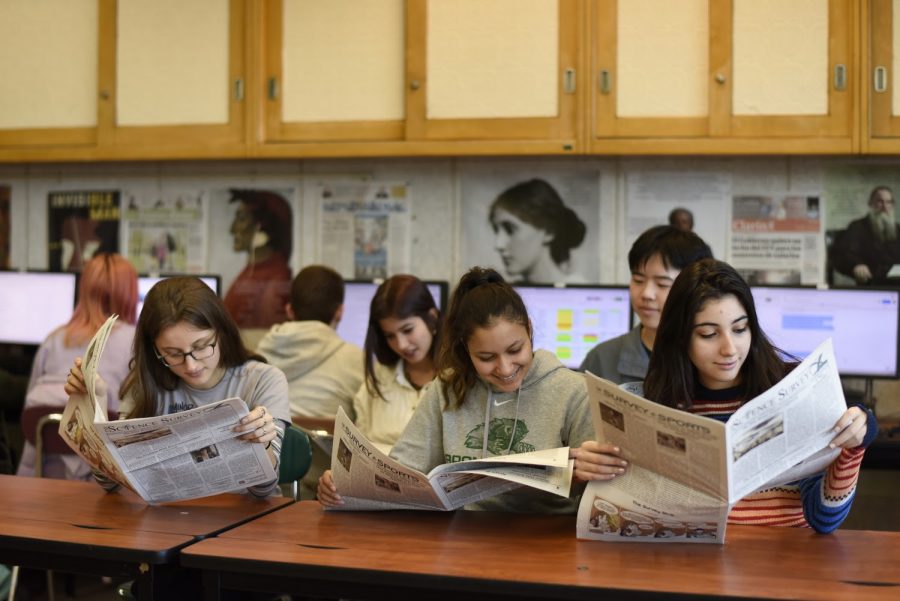 Three of the seven Editors-in-Chief of 'The Science Survey' read over the recent publication.

Unassumingly tucked behind the entrance to the English wing, Room 214 buzzes with energy. Students type furiously at their desktops, scan through newspaper proofs, and scroll endlessly through The New York Times website. Mr. Thorp, a perpetually-busy presence at the front of the room, seems to be writing on the white board, giving feedback to student journalists and arranging for photography all at the same instant. This is Bronx Science’s Journalism Workshop, one of the school’s oldest and most recognized organizations, whose newspaper receives top state awards on an annual basis.

Despite their critical recognition, you may know them only as the students who you see in the hallways with Nikon cameras in hand and who e-mail you relentlessly for article quotes. In part, the caricature paints a true picture of the tedious, grueling process that goes into publishing a single issue of The Science Survey. Still, a survey conducted in the Bronx Science Facebook page revealed that roughly a third of students do not read the printed newspaper, and even more do not read the online edition. These statistics are telling: there seems to exist an inhibiting barrier between the students of Bronx Science and their award-winning paper. Perhaps it’s a barrier linked to the decline of renowned print papers across the country, or the increased dependence on young people on social media for their news; regardless, it’s a barrier that can be broken through an understanding of the diligence and creativity that goes into publishing an issue of The Science Survey.

In truth, the process that goes into creating an issue of the newspaper is arduous and often tedious: each of the 102 student reporters are responsible for writing at least one article per issue, the subject of which is chosen in a class-wide brainstorming session. The reporter is then responsible for thoroughly researching their angle, incorporating quotes from Bronx Science students, taking their own photographs with highly technical Nikon cameras to accompany their piece, and, of course, writing the article itself. Each draft, once completed, goes through three rounds of edits by three separate editors, a process that can take weeks, alone. Throughout the ordeal, the Editors-in-Chief are responsible for selecting which of the articles will be published in print, and which will be online; only half may make it into the physical paper. The best, most enticing articles are selected to be printed on A1, the front page of the newspaper.

The success of this process, however, is contingent on each individual’s ability to complete their role in a timely and thorough manner. And within a group of teenagers easily distracted by other schoolwork and, at times, each other, this contingency can be a gamble. “The hardest part of the newspaper process is ensuring that everyone meets the deadlines. If we want to get the paper out at a certain date, we have to be punctual and monitor the progress of the paper,” said Kaitlyn Romanger ’20, one of the seven Editors-in-Chief of The Science Survey.

Still, The Science Survey has managed to be massively successful. Each issue features an array of stories covering everything from international relations and political campaigns to Bronx Science clubs and movie recommendations. Even more importantly, though, The Science Survey serves as a beacon of youth voice, and an opportunity for students to practice taking part in a democratic civil society.

“I think it’s important because it shows students really can have a voice if they want and they can be active and show passion for different ideas despite many older generations trying to silence us. It’s a really good way to get involved in school and make something tangible,” said Leann Golderg ’20, another Editor-in-Chief of The Science Survey. Our newspaper serves as an outlet not only for the opinions and work of its reporters, but of the entire student body. Without joining the journalism class, you can promote student democracy by contributing quotes and story leads–or simply by reading every issue of the paper. In a community of intellectual and passionate students, we should encourage, celebrate, and defend the expression of our voices.
The Science Survey serves as a beacon of youth voice, and an opportunity for students to practice taking part in a democratic civil society.