Keep Calm and Cross On 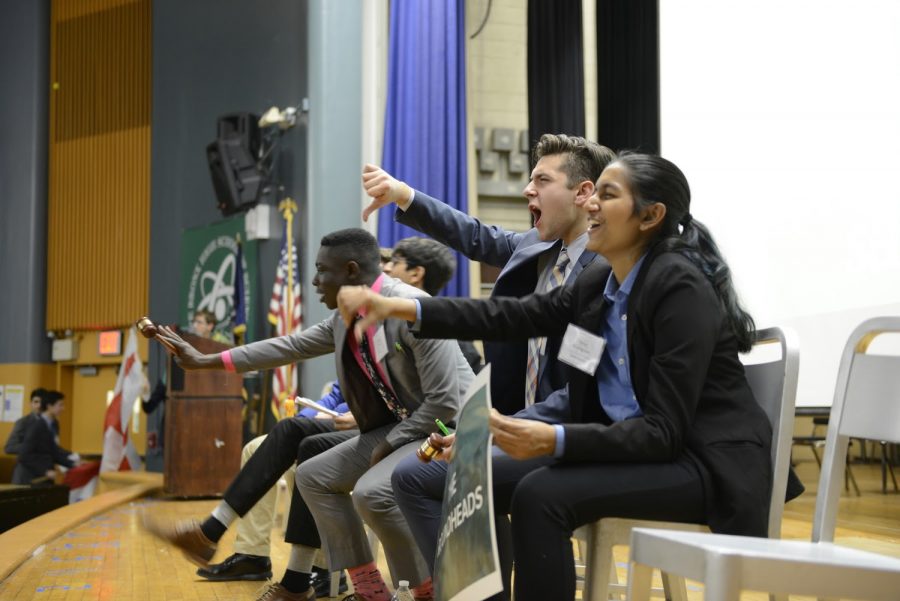 The SCIMUN conference showcased a wonderful variety of committees that allowed students to embody a completely different person (or country!) for a day. “There was something remarkable about seeing the yearlong preparation of the whole team help bring together passionate MUNers for a series of our extensively planned simulations” said JK Aroni Goongoon’21.

The Bronx Science Speech and Debate team is one of the largest in the nation and is one of the school’s many pride and joys. Founded by Richard B. Sodikow ’55 in 1969, the speech and debate team has since been a staple of Bronx Science identity. The team consists of different sectors of debate and speech: Public Forum, Lincoln Douglas, Congress, and Policy. The speech categories range from original oratory to extemporaneous speaking. Countless trophies line the school halls dedicated to the team and its various members. It is one of the most pivotal parts of Bronx Science culture, yet there are some students who have taken advantage of a different side of Bronx Science’s extensive offering of public speaking clubs and teams.

The most prominent public speaking clubs are Moot Court, Mock Trial, and Model United Nations (MUN). These three clubs perform successfully in their tournaments and conferences, but only a very small portion of the student body are informed of these teams’ achievements. According to a Facebook poll, 61% of the student body did not know about the recent Moot Court wins at the Bar Association Mock Trial or Bronx Science’s 13th annual Model UN conference. However, for some on the teams, this aspect can be comforting. Sarah Lydon ’21 believes that Mock Trial/Moot Court “allows [her] to try new things.”

For those who don’t know what Moot Court or Mock Trial is, here is a quick rundown. They are two activities that are a part of the same team. Moot Court takes place during the fall and Mock Trial takes place during the winter and spring. In Moot Court, an oral argument about the constitutionality of a case is created. In Mock Trial, one emulates a witness or a lawyer in a fictional case. The Moot Court team has twelve members while the Mock Trial team has eighteen. The teams usually admit less than five members each year due to a selective tryout process. This may sound alarming but there is only one competition at the end of each season (a total of two) that the team prepares for. Thus, it is crucial that the team is composed of dedicated, well-versed students who can win a case. The team practices are located at Friedman Kaplan, a well-renowned law firm, where the team works with lawyers that volunteer their time to help the team with their case. At practices, students have the opportunity to learn more about the inner workings of a law firm and at competitions, they have developed some unforgettable memories. Reese Villazor ’21 said, “the whole experience really brought us together as a team.” If you would like to know more about the team, you can contact Mr. Symons, the team advisor, or Chacko Mathai ’20 and William Freedman ’21, the team captains.

Model UN is similar to speech and debate where students write speeches and defend their positions, but instead of trying to deconstruct an opposing team’s argument, delegates have to come to a consensus. At conferences, each student represents a country or person and debate about the political, social, environmental, and international issues. Although the research and preparation for conferences may be an individual task, at the end, there is a collaborative group effort to create resolutions while representing a country or person whose views may differ from one’s own. Instead of trying to win a specific resolution through crossfires or philosophy, Model UN centers around compromise. The tryout process for Model UN isn’t as competitive as Mock Trial/Moot Court because there is none! Interested students can simply show up to the meetings every Tuesday and commit if they choose to (attending every practice is a must!). Currently, the team is made up of around 190 students and there are plenty of opportunities for novices to go to at least one conference a year. Unlike the other teams, MUN helps students develop certain leadership skills as consensus building. “Consensus builders can lead a variety of people,” said faculty advisor Ms. Diane Steiker. She believes that MUNers develop empathy, responsibility, and flexible thinking which can lead them to become a “shaker of the world” (as Mrs. Steiker likes to call the “best and the brightest MUNers”). If interested in Model UN, you can contact Ms. Steiker or the Secretary, General Jack Tapay ’20.

Overall, Speech and Debate, Moot Court/ Mock Trial, and Model UN have all informed their members of important domestic and global issues. “I have become a much more confident and informed person because of debate,” said Amanda Caress ’20. Debate, specifically, also fosters responsibility, as many debaters are accountable for their cases, speeches, and tournament application. “I would say I’ve learned to speak better and I’ve learned to deal with deadlines because of tournaments and assignments,” said Theodore Wai ’21. The team offers so many benefits, that  more than 100 ninth graders always show up at the interest meetings every year. The vast size of the speech and debate team sometimes overshadows the equally rewarding, demanding, and enjoyable Model UN and Moot Court/ Mock Trial teams. They are truly viable options that offer a different way to exercise one’s public speaking abilities.

Overall, Speech and Debate, Moot Court/ Mock Trial, and Model UN have all informed their members of important domestic and global issues.