Battle of the Newspapers 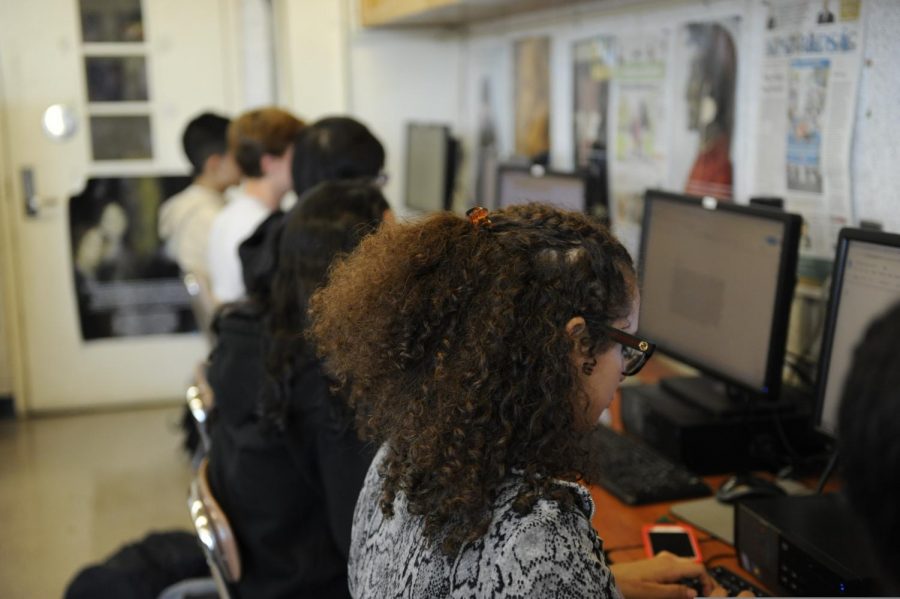 At Bronx Science we take a more hands-on approach to learning about journalism. “I love working with all my fellow journalists to provide the school with exciting and engaging news,” said Daniela Castro Garcet ’20.

To learn more about how other schools run their journalism classes, I spoke to teachers and students at Riverdale Kingsbridge Academy (RKA), a public middle and high school in the Bronx.  Mr. Michael Lepetit, on top of teaching journalism, also teaches sixth grade ELA and is the coach of the RKA cross country, wrestling, and track and field teams. Just like at Bronx Science, the RKA class’ responsibilities include producing both the yearbook and newspaper. The similarities, however, end there.  At Bronx Science we have three sections of journalism and two sections of yearbook graphic design studio, whose focus is to take high quality photos, select photos for publication, and design the layout for the yearbook. At RKA they have just one section of journalism where students perform both the writing and formatting of the articles for both the newspaper and yearbook (it is a much smaller school).

A major difference between the two newspapers is the content. Here at Bronx Science we have six different sections in our newspaper: News, Features, Spotlight, Sports, Editorial, and Arts & Entertainments (A&E).  As a result, our newspaper covers a wide range of topics spanning from global affairs to arts & entertainment, and even student life. Students choose their article topics during the budget meetings we host before we begin the process of composing a new newspaper edition. At RKA, the newspaper mainly focuses on local and school wide affairs, including both middle and high school. “I try to prioritize articles about RKA and then Riverdale,” said Lepetit. Lepetit also said, “All students write an article and then the strongest twelve or so are edited and go to print.”

The most significant difference I noticed between the two programs is the formatting of the class. At Bronx Science we take a more hands on approach when learning about the process of journalism. At the beginning of each academic year, we study journalistic articles from The New York Times to learn the basics of journalistic photography and writing.

Within a few weeks, we begin writing articles for the newspaper. We learn from our peers through senior led presentations on various elements of journalism, and then it is up to us to integrate these techniques into our writing. “By empowering the seasoned journalism students to teach the new students, it really fosters a culture of a student-led publication, which is something that I really believe in,” Mr. Thorp said.

At RKA, they take a slightly different approach. Although they spend time writing, editing, and formatting the newspaper and yearbook, they also dedicate time to direct lessons about journalism. “We look at sources and who should be quoted and why,” said Lepetit. “We also talk about how to ensure that we are avoiding bias and being fair to all sides.” For one particular project, they focused on analyzing the validity of statistics about their school’s safety. They had to conduct interviews and then weigh the statistics against their interviews.

It seems pretty clear now that not all journalism programs are built alike, but the goals of the classes tend to overlap.  “I want my students to be exposed to various publications and to be able to intelligently interpret what they are exposed to,” said Lepetit. “There are a lot of great publications out there but there are also a lot of bogus publications and being able to figure out which is which is very important.”

Mr. Thorp had something similar to share. “By encouraging my journalism students to read articles in ’The New York Times and the Washington Post, I believe that they truly learn about what is going on in the world at large and how to write about these events in a professional journalistic manner.
“By empowering the seasoned journalism students to teach the new students, it really fosters a culture of a student-led publication, which is something that I really believe in,” Mr. Thorp said.