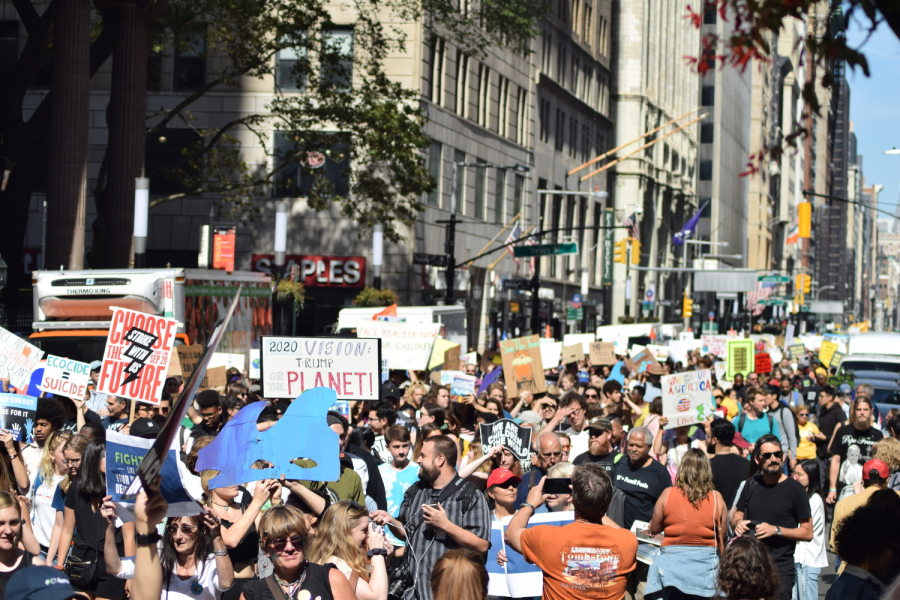 Some Bronx Science students joined the mass of people marching downtown on September 20th, 2019 in protest of climate change. “I am proud of our school for stepping up and making a difference!” said student activist Carolyn Chui ’22 who attended the march.

With the dawn of a new decade, we reflect on all the great things that have happened this school year at Bronx Science. We walked out together to protest climate change, we won PSAL championships and set school records. We enjoyed homecoming and Monster Mash, and were ranked fourth in the nation for STEM. We were active in the community, victorious in sports, and we also found time to celebrate.

This fall saw record levels of Bronx Science students participating in political and world events. On September 20th, 2019, many of our students walked out of school to protest the lack of action the U.S. government and the United Nations have taken on climate change.  “There’s a shift in the community. A lot more people are getting involved,” said cabinet member, Edie Fine ’21. Also this fall, the Bronx Science Green Team presented a sculpture of a wave made out of plastic garbage to raise awareness for the growing issue of plastic overuse and the harm it causes to marine life.

While some may view Bronx Science as a STEM-based school that pays little attention to the environment, this is untrue. The blue wave sculpture and climate march are great examples of Bronx Science evolving and advocating for the well being of the environment. “I think we are becoming a bit more community oriented and social justice focused. This year, I feel like there is a solid amount of people who want to make change in our school and in our larger community,” said Fine. In the spring of 2019, students organized a walkout in support of gun control legislation and to honor all of the victims of recent school shootings. In the new year, our school will continue to grow its political activism, and our student organizers are ready.

This year, the Bronx Science athletics have knocked it out of the park. Girls’ Varsity Volleyball made history when they won the PSAL championships against Brooklyn Tech. Never before has any volleyball team at Bronx Science made it this far in the competition. Jess Mueller ’21 said, “When we realized we had a shot at city championships, we fought as hard as we could. I’m so proud of this team for going all the way!” Both the Girls’ and Boys’ Varsity Cross Country teams dominated the course when they both won the City PSAL championship yet again.  As the spring season starts up, make sure to go out and support our sports teams so that our Spring PSAL season can be even more successful than the fall and winter!

The fall of 2019 has been a string of fantastic events. Cabinet organized a wildly successful  monster mash on Halloween. “I’ve never felt so much holiday spirit at school. I can’t wait to see what they come up with for 2020,” said Zoya Garg ’21. Even some traditional Bronx Science events have seen some changes this year. “We are having the can drive right now but instead of just the can drive it’s the toys, cans, and coat drive,” said cabinet member Sophie Poritzky ’21.

Along with the new items to donate, Cabinet is expanding the recipients of their donations. This year we  also had mental health days and various spirit days spread out across the first semester. Get ready for more fun this spring; Cabinet is planning to organize another carnival. Like last year, they will invite multiple food trucks and have popcorn and cotton candy!

Cabinet is also planning to revive the “leave your mark movement” at Bronx Science. According to Poritzky, “we will decorate the hallways with Bronx Science artwork. It was here a few years ago, but we’re bringing it back! People are submitting stuff right now.”

But the most exciting event of all will be Culture Day. New to Bronx Science, Culture Day will be an international food fair after school. Various culture clubs and students will volunteer to bring in food and have the chance to present their background. There will also be performances by various groups in the cafeteria. Culture Day will be free of charge and completely voluntary. Cabinet member Anthony Bonavita ’20 said, “We are a very diverse school, and Bronx Science is celebrating that diversity.”

As the student body of Bronx Science ends the decade on a high note, we look forward to even more activism, athletic success, and fun in 2020!
“I think we are becoming a bit more community oriented and social justice focused. This year I feel like there is a solid amount of people who want to make change in our school and in our larger community,” said Edie Fine ’21.