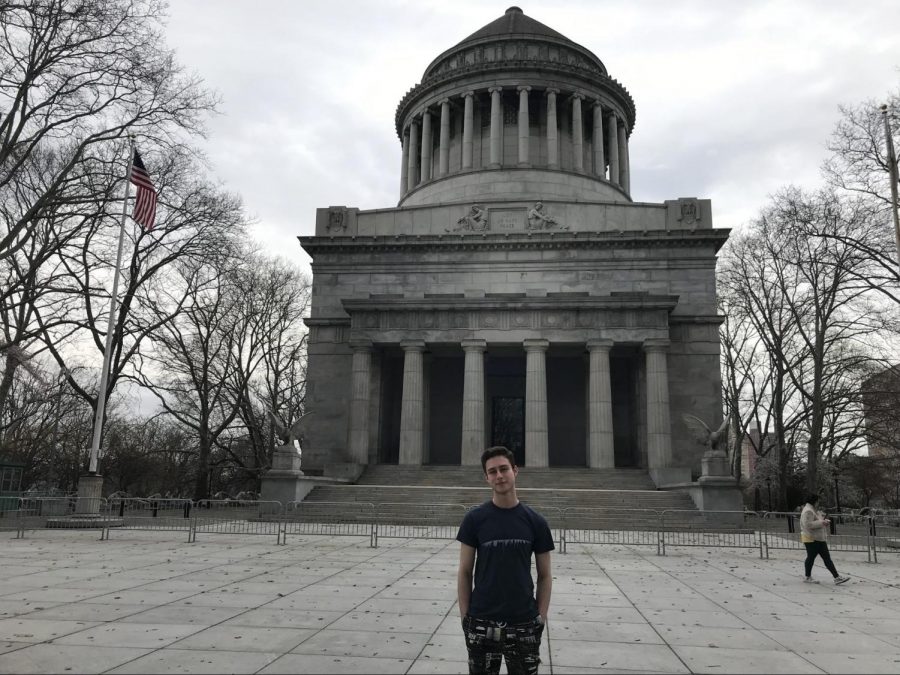 Elias Silver '20 in front of Grant’s Memorial in his neighborhood, Morningside Heights.

As New Yorkers, we often take the kind of city we live in for granted. Every year, millions of tourists come to see this beautiful city of ours: the tall buildings of Manhattan, the famous Statue of Liberty, the glamour of Fifth Avenue. As residents of New York City, we tend to forget how much this city has to offer. However, the real beauty of the city is not just found in Manhattan, but in the small things in our everyday lives. Many of us fail to appreciate the areas we live in and have yet to explore them. The bakeries and shops we pass by on our way home are disregarded as we rush from destination to destination. Every neighborhood has its own unique places that make them special to us.

DUMBO, short for Down Under the Manhattan Bridge Overpass, is a popular site for tourists to visit, but it is also home to many Italian Americans. Paved with cobblestone and the remnants of early twentieth century train tracks, the streets of DUMBO are filled with unique cafes and boutiques. Towering above the area is the famous Brooklyn Bridge, where thousands of people walk to enjoy the scenic view of New York City. During the warmer seasons, a walk alongside the East River of Brooklyn Bridge Park is most enjoyable with a vanilla chocolate chunk ice cream cone from the Brooklyn Ice Cream Factory. “I love waking up in the morning to the sight of the Brooklyn Bridge in all its majesty as the sun sparkles on the ripples of the East River and illuminates the prominent American flag on the top of its Brooklyn tower,” said Jonathan NiCastro ’19.

Just on the border of the Upper West Side and Harlem, you will find a peaceful neighborhood home to many college students. “Morningside Heights is just far enough uptown to avoid the congestion and business of downtown Manhattan, but not too far so as to separate it entirely,” said Elias Silver ’20. Along with Columbia University, the neighborhood is surrounded by schools and libraries like the Manhattan School of Music, Teachers College, and Barnard College. Right by Riverside Park is Grant’s Tomb, a memorial dedicated to the eighteenth U.S. President, Ulysses S. Grant. The neighborhood is also home to people of many different cultural backgrounds. “Some of my neighbors are from Haiti, others from Korea, and still others from the Dominican Republic, really allowing me to appreciate the usefulness of learning world languages, as a lot of people in the neighborhood can’t communicate well in English,” added Silver.
“I love waking up in the morning to the sight of the Brooklyn Bridge in all its majesty as the sun sparkles on the ripples of the East River and illuminates the prominent American flag on the top of its Brooklyn tower,” said Jonathan NiCastro ’19.
Astoria, Queens

On the edge of Queens, right next to Randall’s Island, is the small neighborhood of Astoria. Filled with authentic tavernas and supermarkets, the neighborhood’s strong presence of Greek culture gives its residents a taste of Greece. “I love going to my local Mediterranean shop to buy different types of cheeses, dolma, and olives,” said Bhaskar Chakrabarti ’21. One of the most popular spots in the neighborhood is Astoria Park, which offers a wide range of facilities such as a pool, a track field, and tennis courts. Connected to the Hell’s Gate Bridge and the Robert F. Kennedy Bridge, the park has a beautiful view of the city. The neighborhood is especially lively at night, when the streets are filled with people and bright lights.

Connecting Manhattan and the Bronx, Concourse has been the home of Yankee Stadium since 1923, when it first opened for a home game against the Boston Red Socks. Ever since then, the Yankee Stadium has been the pride and joy of baseball fans in New York. “Every time there’s a baseball game, I get to experience the hot pretzels stands, pizza slices, the drinks in everyone’s hands, and of course the fan chants,” said Yi Lan Zhang ’20. Due to the large presence of baseball culture in the neighborhood, four ball parks surround Yankee Stadium, each within a mile from the stadium. “My favorite place in the neighborhood is Macombs Dam Park. The park has many hills, on which I spend summer mornings running around in the calm air,” added Zhang. However, Concourse is not just filled with parks; right by the stadium there is the Bronx Museum of the Arts, a Hard Rock Cafe, and a Multiplex Cinema for all the residents of Concourse.

We each have our own places to call home. Some people may be from Staten Island, or even all the way from Brooklyn. But one thing remains: we are all New Yorkers. You will discover how much New York City has to offer if you take it!