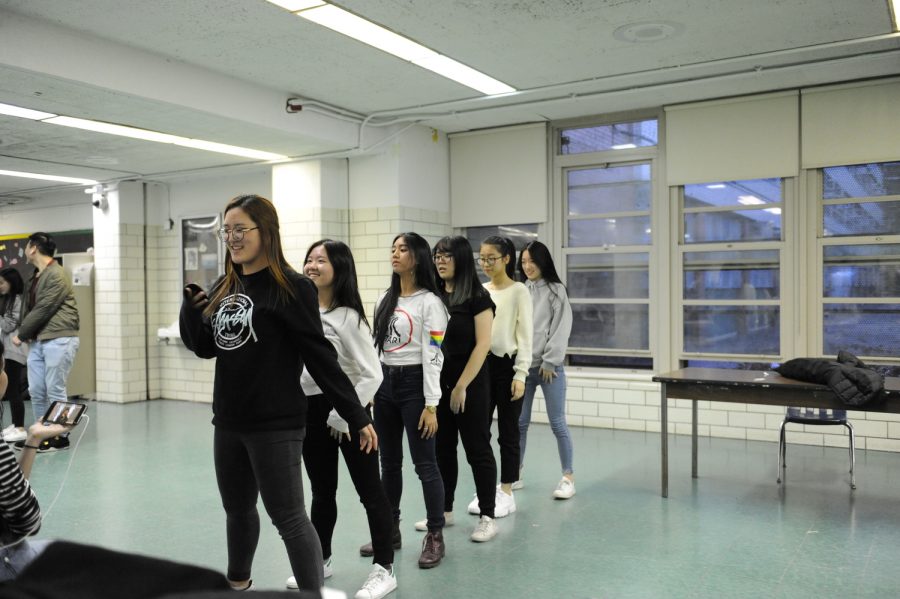 Students practice their Lunar New Year dance routines in the cafeteria after school.

With over eighty clubs and student activities offered here at Bronx Science, a few showcase students’ talents throughout the school year. Clubs such as Lunar New Year Productions and NASHA of Culture celebrate cultures from different parts of the world through artistic forms such as dance. Through these productions, students are exposed to all types of cultural movements from around the world.
“I was looking forward to my singing/rapping performance with my friend because we practiced really hard for it. I was also looking forward to seeing the performances of other groups because I had not had a chance to preview them yet,” said Lin Zhang ’19.
Lunar New Year Productions encompasses a wide range of activities that promote and influence the East Asian body of this school.The array of shows include Modern Dance and Fan Dance and allow performers to embody and express their culture in different ways.

“I joined Lunar because I was a big fan of Korean pop music and Lunar was a good way to connect with people with the same interests. My love of performance also drew me into the club as a person who is interested in dance and different cultures,” Janet Chen ’20 said. As co-secretary of the group, she is responsible for announcements, board decisions, and the annual Lunar showcase.

Carrie Liang ’19, Senior Modern Dance Coordinator, noted, “Every meeting, modern dance groups go off to practice on their own. The board usually sets deadlines so that we can check on the progress of each group and make sure that each is on track for the show. Thus, each group is responsible for scheduling practices and ensuring that the group is ready to perform.”

This year’s Lunar show was on April 17th, 2019, and it showcased a wide variety of acts including rapping. Lin Zhang ’19 was excited about the rap she performed with her friend. “I was looking forward to my singing/rapping performance with my friend because we practiced really hard for it. I was also looking forward to seeing the performances of other groups because I had not had a chance to preview them yet,” said Zhang.

However, the work that goes into preparing and managing the stage for the show often goes unseen. From setting up the lights, sound, and decorations, the backstage crew holds the responsibility of making sure the dress rehearsals run smoothly. The backstage crew contributes to the overall presentation greatly. “Going to practice every day, I am excited to learn something new. Despite not being a performer, I am still able to join in on their practices to learn new forms of Asian expression. Some days I get to perfect my skills in the Chinese yoyo while other days I get to learn new k-pop dance moves. Every week, it’s a different experience which makes it an event I always look forward to,” said backstage director Janice Liu ’20.

For seniors, the end of the year is approaching and this will be the last time they will be showcased in the Lunar show in Bronx Science. “Since it’s my last year at Bronx Science. I was really looking forward to dancing with my friends one last time in the show. I also enjoy watching other performances because I can see the amount of work and effort everyone has put into the show,” said Liang.

Zhang gives some memorable advice for individuals participating in the future productions. “For the future generations who are thinking about joining Lunar, I’d say definitely do it. Lunar helped me make so many friends, and I’ve had unforgettable memories with my dance groups inside and outside of school during practices.” Zhang also noted, “It really is like a big family where everyone works hard to put on a great show. I hope the new members of Lunar will participate in the traditional dances as well and carry on the tradition as many tend to just participate in modern dances.”