The Festival of Breaking the Fast: Ramadan 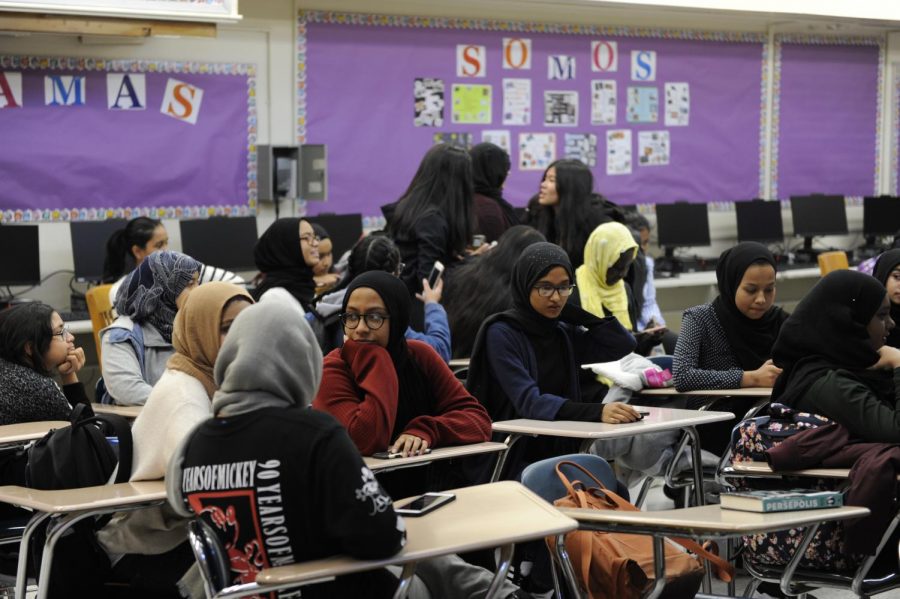 Attendance in the Muslim Student Association meeting is strong, before a meeting on the importance of Islam in their daily lives.

For the past month, a modest portion of the Bronx Science community ceased to eat and drink from sunrise to sunset. Students endured the stress and strenuous activities of school with a lack of proper nourishment, all for the purpose of gaining a stronger spiritual connection to Islam.

This period of fasting is well-known as Ramadan: the ninth month of the Islamic calendar. During this month, Muslims typically try to complete a majority, if not all, of their fasts, although there are exceptions and times where completion proves to be difficult. Many people have to resume their normal schedules in spite of their nutritional deficit, resulting in their bodies struggling to become accustomed to functioning properly in their new state.

Despite the hardships that come with Ramadan, the overall experience is generally enlightening. “I really love the fact that Muslims all over the world are all fasting together. It really shows the solidarity of Muslims,” said Mohammadou Gningue ’19. “We can reset ourselves spiritually, mentally, and physically and work towards growth in all of these aspects.”

As the month of Ramadan comes to a close, the Muslim community eagerly anticipates what awaits at the end: Eid al-Fitr. Also known as the “Festival of Breaking the Fast,” Eid is one of two religious holidays shared by all Muslims. Regardless of the cultural differences during celebration, there is always a sense of global unity when the holiday nears.

Bronx Science, containing a large population of students who are Muslim or come from Muslim households, has an abundance of students who are prepared for celebration. For numerous students, Eid happens to be one of their most beloved festivities. “Eid is my favorite holiday by far!” Rasheed Hossain ’20 declared. “I just love being with family and friends and doing fun activities; it’s all positive.”

While countless numbers of students haven’t decided what they are going to do during the holiday, few others have a general idea of how the festival will transpire. Rahma Tasnim ’19 mentioned participating in common cultural aspects of Eid, such as “mehndi nights and Chand Raat.” Both mehndi, also known as henna, and Chand Raat, the eve of Eid al-Fitr, are standard ways to celebrate the festival. Gningue also mentioned that “part of the customs that we do on Eid are things that I suppose we may consider cultural: we dress in our best traditional clothing, eat our cultural foods and such.”

Regardless of how Eid is celebrated, it always proves to be a memorable and entertaining event. Hossain reminisced on past years when he would compare the amount of money he received during Eid with his friends in light-hearted fun. “I was jealous because they already had more Eid money than me,” Hossain said. “We made it a competition to see who would end up with more money at the end of the day, and I made a huge comeback.”

Other celebrations are more emotional, especially in regards to family. Gningue shared a cherished memory of his, when his uncle arrived with his entire family on Eid. “My grandma, who lives in Senegal and had never come to America before, was there this year,” Gningue said. “It was really beautiful because unfortunately, that uncle was suffering with colon cancer for nine years, and he passed away a few months later. I always remember that Eid as it represents the good old times when I was much, much younger.”

Time and time again, Eid has proven to be a beloved celebration throughout the world. For many students at Bronx Science, the festival plays a large role in their lives, bringing joy in the simplest of ways. Eid is more than just a religious holiday; it is a day of unity amongst the Muslim community.
“I really love the fact that Muslims all over the world are all fasting together. It really shows the solidarity of Muslims,” said Mohammadou Gningue ’19. “We can reset ourselves spiritually, mentally, and physically and work towards growth in all of these aspects.”