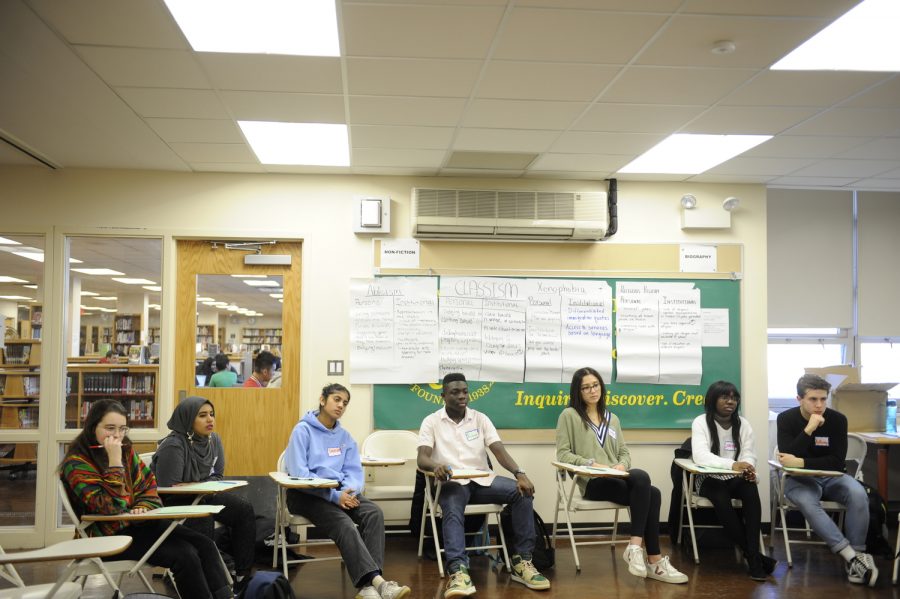 Students reconvene to share what they spoke about in small groups during an ADL meeting.

Bias, both subconscious and conscious, manifests itself in almost all settings in our everyday lives. In order to prevent unwanted bias at Bronx Science, several students have stepped up to work alongside Mr. Nasser and the Anti-Defamation League.

The Anti-Defamation League (ADL) is an international Jewish non-governmental organization that aims to fight all forms of bigotry. ADL’s flagship ‘A World of Difference’® Institute initiated a program called ‘A Classroom of Difference’™. Thus far, it has trained thousands of educators, counselors, administrators, and reached even more families and students in all grades around the country. The tenacious efforts of the ADL in creating respectful, inclusive, and civil environments reflect their core values and have proven to be extremely successful.

During the meetings, student representatives sit in small groups and are given prompts to discuss. At the first meeting on November 11th, 2018, significant terms such as discrimination, bias, and culture were defined, and students discussed the societal impacts of these terms. Representatives from ADL asked thought provoking questions, such as whether or not the student participants have ever had personal experiences with bias. Although many of the students did not know each other personally prior to these meetings, they felt comfortable opening up to one another. Together, they shared stories from their own lives, or the lives of their parents, many of whom grew up in other countries.

“The most memorable part of the experience was when the administrators from ADL called out groups that we should organize ourselves into. As the activity went on, the groups were based on less trivial divisions. It was illuminating to see all of our similarities and differences,” said Melody Moulton ’21.

In total, there were three ADL meetings, each lasting approximately six hours, from 1 P.M. to 7 P.M. The first meeting consisted of everyone introducing themselves (and wearing name tags, for good measure) and getting introduced to the organization and its core values. Many of the representatives did not know each other prior to the experience; however, by the end of the first meeting, they felt as if they were all close friends.

Edie Fine ’21, one of the student representatives, said, “We were able to all get to know one another on a deeper level. Sharing and hearing certain personal stories was difficult; however, it lead to more valuable discoveries and connections. We were able to forge bonds across lines of difference.”

Student participants were also given manuals that outlined what the program had to offer, as well as how to be role models amongst their peers. The manuals offered insight as to what bias entails, particularly in everyday instances, and ways to prevent it, such as using more neutral dialogue.

“Not only were we able to pull from our personal experiences when speaking with each other, we were able to utilize our newfound knowledge to have more honest and open conversations,” said Elana Abrams ’21.

Mr. Nasser, Assistant Principal of Pupil Personnel Services, has organized this initiative at Bronx Science. As his title suggests, he aims to make all students feel secure, respected, and welcome in the school environment.
“Sharing and hearing certain personal stories was difficult; however, it lead to more valuable discoveries and connections. We were able to forge bonds across lines of difference,” said Edie Fine ’21.
When asked what prompted him to begin this program, he replied, “We really wanted to make a safe school community and culture. We recognized the power of student voice, looked at different organizations, and found that the Anti-Defamation League was best equipped and the most comprehensive of all options. They focus on both the training aspect, as well as what happens next.”

With the three meetings over, the student leaders hope to preserve the key takeaways from them by being examples of tolerance and acceptance in our school environment. They will create presentations on important topics, such as prejudice and how to unlearn it. They will also play a role in creating inclusive settings both inside and outside of school. These presentations will be given during monthly ninth grade advisory meetings, during sophomore guidance meetings, and through a partnership with the Equity Board, the initiative will manifest itself through clubs and organizations.