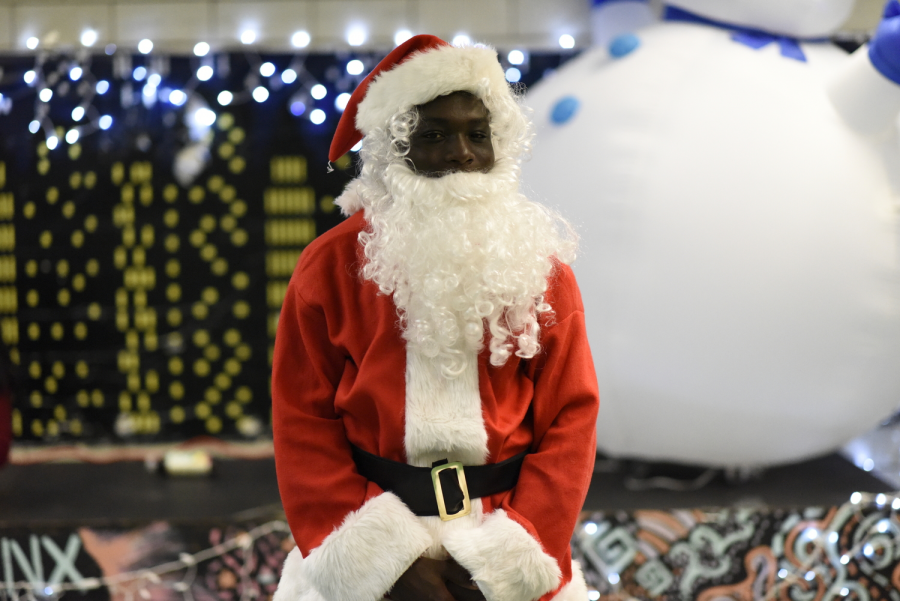 Baboucarr Gaye ‘20 dresses as Santa Claus for the Winter Wonderland.

Enter the cafeteria on the last day before break. The halls are decorated with Christmas decorations all around. An inflated snowman is in the corner of the cafeteria and an inflated Santa Claus is in front of the COSA Office. People are wearing ugly Christmas sweaters, while others wear signature Christmas colors, red and green. Zoom in to any table in the cafeteria, and chances are that there will be stacks of presents and gift bags stacked on the table. Friends are hugging each other and opening presents hurriedly before the first bell rings.

Bronx Science students take part in Secret Santa. The gift exchange typically happens the day before winter break starts. However, this week is often a stressful one too. In order to avoid giving tests and projects during and after break, teachers assign most of the work the week before. Consequently, students are pressed to find some enjoyment amid this stressful week. “I had several tests and projects due this week, but one thing that kept me going was the anticipation of spending time with my friends,” said Asef Khan ‘20. Other students hold the gift exchange two days before break starts to save time in case people go on vacation early.

To keep the randomness intact, many students used a random name generator to distribute names. These websites also offered users the ability to make a wish list, and help out their Secret Santas. “My senior shirt group ended up being my Secret Santa group, so the group was pretty big; there was a total of twelve of us. I knew most people in my group, but there were some people I didn’t know as well as I knew others, so getting them a gift would have been impossible without a wish list. The wish list allowed me to get them a present they actually wanted instead of me buying something they never needed or wanted,” said Eshika Badrul ’19.

Some popular clubs at Bronx Science are also part of the Secret Santa game. Both Key Club and the Muslim Student Association (MSA) are avid participants. MSA has its own version of Secret Santa―Secret Eidi. Secret Eidi and Secret Santa are the same thing, except their names are different. This tradition has been around for at least a decade, but it started because in the past, Eid was around Christmas, so the presidents of the time decided to encourage gift giving to promote the Eid and Christmas vibes of giving. “Regardless of the fact that Eid isn’t during this season anymore, the game promotes gift giving. Since people are randomly paired, it is a great way for some of our members to get to know each other,” said Rajaa Elhassan ’19.  The Femaidens are also taking part in Secret Santa. This is their first year doing it and they are using the website elfster to randomly draw names. The Femaidens work together all the time and this is just an opportunity to get to know each other better and form closer ties.
“One thing that kept me going was the anticipation of spending time with my friends.”
This is also the last time seniors will take part in Secret Santa in this school. As seniors are getting college decisions, it has been an emotional journey with some seniors getting ready to move halfway across the country. “We tell each other that we will keep in touch, but the truth of the matter is that we do not know that for sure. Even if we do stay in touch, the distance will definitely affect our relationship. I would love to do Secret Santa annually with my friends, but since we are never sure of the future, I want this year to be the best Secret Santa,” said Joy Lin ‘19.

Secret Santa may be just a game, but it is a great way to promote the idea of giving while keeping everyone engaged and interested.